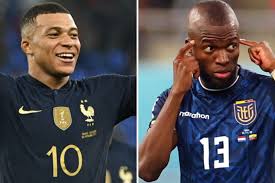 The 2022 FIFA World Cup features 32 nations competing in soccer’s biggest event in Qatar, the first World Cup ever held in the Middle East. This year marks the final edition of the tournament with a 32-nation field – that number is set to increase to 48 for the 2026 World Cup, which will have venues across the United States, Mexico and Canada.

This year’s Copa Mundial looks different for several reasons, including the dates (due to Qatar’s intense summer heat, the schedule was shifted to November-December instead of its traditional summer timing). But as always, the event features the world’s top fútbol nations vying for global glory as well as individual awards for top performers, including the coveted prize for attacking players: the Golden Boot.

At the last iteration of the World Cup, England’s Harry Kane, also a star for Premier League side Tottenham, took home the award thanks to his six goals, which likely helped soften the blow of the Three Lions falling 2-0 to Belgium in the third-place match. One of the top storylines to watch at this year’s World Cup is the swan song for two of the game’s biggest stars: Argentina’s Lionel Messi and Portugal’s Christiano Ronaldo. Neither player has ever won the Golden Boot, and neither of their teams has won the World Cup during their tenures. Defending champions France will likely field some contenders for the award, including Kylian Mbappe and Karim Benzema. For more on the latest Golden Boot standings, odds and predictions throughout the tournament, follow along with ProSoccerTalk and NBC Sports Edge.

What is the Golden Boot?

The Golden Boot is the award given to the top goal-scorer at each edition of the World Cup. If at the conclusion of the tournament two or more players are tied at the top of the list with the same number of goals, the award will go to the player with the most non-penalty goals, and if they are still tied, it will go to the player with the most assists. While there has always been a top goal-scorer at the tournament, the specific award has been given since 1982. It was known as “The Golden Show” until its re-christening in 2010.

RELATED: World Cup 2022 rankings: Who are the favorites?

The ‘Golden Boot’ award trophy for best footballer in the tournament sits on display in an Adidas AG ‘pop up’ shop inside the G.U.M. luxury department store in Moscow, Russia, on Saturday, June 9, 2018. FIFA expects more than three billion viewers for the World Cup that begins this week in Russia. Photographer: Andrey Rudakov/Bloomberg via Getty Images

The World Cup begins Sunday, November 20th with host nation Qatar taking on Ecuador in the opener. The group stage runs through December 3rd before the knockout rounds begin. The final is set to take place on Sunday, December 18th.