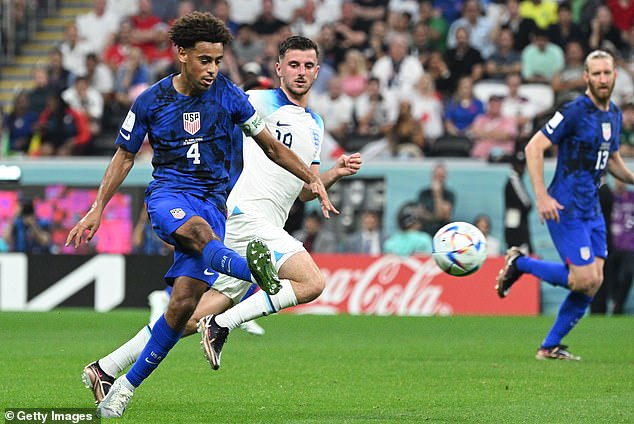 The U.S. men’s national team faces a must-win situation against Iran in its World Cup Group B finale, after tying Wales and England in its previous two games.Iran, meanwhile, only needs a draw against the USMNT to advance out of the group stage for the first time in its history. After getting trounced 6-2 by England in its World Cup opener, Iran rebounded for a 2-0 win over Wales.The USMNT must also exorcise some demons. Iran famously defeated the U.S. 2-1 in a 1998 World Cup match in France that eliminated the Americans.Group A will also kick off its final round of matches Tuesday. With Qatar already eliminated, the Netherlands (four points), Ecuador (four points) and Senegal (three points) are in contention to advance to the Round of 16.

Senegal had an early chance. Pape Gueye crossed a ball into the box. Idrissa Gueye got on the end of it, but the ball went wide.

In the stands, Senegal fans continue to bring the energetic vibes to their team.

After leaving the previous game against Netherlands with a knee injury, Ecuador’s captain Enner Valencia returns, starting for his nation.

Memphis Depay makes his first starting appearance of the tournament. Netherlands needs a point to advance while Qatar is playing for pride with no chance of advancing to the knockout round.

A Qatari official said Monday 400 to 500 migrant workers died while working on World Cup projects — a number significantly higher than the government’s previously stated three work-related deaths. But that estimate was quickly walked back, with World Cup organizers saying in a statement there were 414 work-related fatalities “covering all sectors and nationalities” nationwide between 2014-2020.

Even that is likely a fraction of the toll. Data compiled by The Guardian from workers’ home countries shows more than 6,500 workers died to make this tournament possible.

Want to watch the U.S. men’s national team’s return, see what’s likely Lionel Messi’s last go with Argentina and Cristiano Ronaldo with Portugal or witness France’s title-defense run? Add matches to your calendar and keep up to date with the latest tournament news.

The U.S. men know exactly what they have to do against Iran on Tuesday to advance to the knockout rounds of the World Cup.

The question is how. Iran coach Carlos Queiroz called the Americans “the most consistent” team in Group B, and “probably even the team that made the best two performances in the tournament in our group.” It’s a nice compliment, but it hasn’t gotten the USMNT much.

So how does the USMNT get the three points it will take to reach the round of 16? Here are three keys.

The Netherlands is looking to secure a place to the knockout rounds against a team already eliminated. The Dutch won its first game against Senegal, but tied the following against Ecuador, preventing them from punching a ticket to the Round of 16 early.

The Netherlands are unbeaten in 17 matches and now face host-nation Qatar, playing for pride after scoring its first World Cup goal in a 3-1 loss to Senegal.

How to watch: FOX and Telemundo or stream on fuboTV and Peacock (Spanish)

Ecuador can win or tie against Senegal and advance, which is a positive for the team with star forward Enner Valencia’s health in question.

Valencia scored all three of Ecuador’s goals this tournament. The captain will need to overcome a knee injury that took him out of the game against the Netherlands.

Senegal, though, if a formidable opponent and must win to put themselves in the best position to advance. A draw would mean Senegal would rely on the Netherlands vs. Qatar result.

How to watch: FS1 and Telemundo or stream on fuboTV and Peacock (Spanish)

While there’s still a slim chance Wales could advance, England will be focused on securing the No. 1 spot in the group against a familiar foe.

“It’s like any two countries whose borders are next to each other. There’s a competitive rivalry,” England coach Gareth Southgate said before the match. “For me, a great sporting rivalry. No more than that. That feeling might not be mutual.”

England haven’t lost to Wales since 1984, and Wales is competing in its first world cup in roughly 60 years. In order to move on the country, led by Gareth Bale, will need to beat England and hope for a USA-Iran draw.

How to watch: FS1 and Telemundo or stream on fuboTV and Peacock (Spanish)

The objective is simple. Win and you’re in for the USMNT. But things aren’t always as easy as they seem. Iran only needs a draw to advance to its first Round of 16, while anything less for the U.S. means the players will pack their bags.

Plenty has been said off the pitch ahead of this match about the squads, geopolitical issues and history between these teams, but it all comes down to the 22 players on the pitch.

How to watch: FOX and Telemundo or stream on fuboTV and Peacock (Spanish)

THREE KEYS: How the USMNT can defeat Iran and advancing to the 2022 World Cup knockout stage.

This article is originally published at Foxnews.com