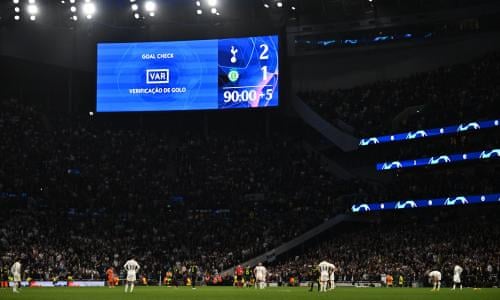 The 2022 World Cup is underway from the Middle Eastern nation of Qatar and as the group stage continues, we’ve seen unexpected upsets and some new contenders emerge – but there’s still a long way to go until the tournament champions are crowned in late December.

Along the way, spectators have already seen most matches impacted in at least some capacity by VAR technology when it comes to determining penalties, possession and, frequently, offsides decisions. After introducing semi-automated offside technology at the 2018 World Cup in Russia, FIFA announced this summer that the tool would return for this year’s tournament. Read on to learn how offsides works and how VAR technology is utilized to make decisions at the 2022 World Cup.

What is the offsides rule?

A player is in an offsides position when they are in the opponent’s half of the field and any part of their head, body or feet is “nearer to the opponents’ goal line than both the ball and the second-last opponent.” Simply put, a player needs to be entirely in front of the last defender when their teammate passes them the ball. The offsides rule exists to keep players from lingering near their opponent’s goal to try and scoop up scoring opportunities.

The offsides rule does not apply when the player receives the ball directly from a corner kick, throw in or goal kick.

RELATED: What are the group stage tiebreaker rules at the 2022 World Cup?

By now a familiar acronym to any fans of year-round leagues like the Premier League, VAR stands for “Video Assistant Referee.” It refers to officials off the pitch who are watching the match with access to multiple cameras, angles and data points, as well as slow-motion replay, who can weigh in on decisions including goals and penalties, with the objective of making officiating more accurate.

How does technology impact offsides calls at 2022 World Cup?

In Qatar, FIFA is using multiple forms of VAR technology to support officials in determining offsides. This includes 12 tracking cameras constantly collecting data on the limb position of each player, as well as “connected ball technology,” a sensor within the official match ball sending kick-point detection data to the video operations room. Per FIFA, “by combining the limb- and ball-tracking data and applying artificial intelligence, the new technology provides an automated offside alert to the video match officials inside the video operation room whenever the ball is received by an attacker who was in an offside position at the moment the ball was played by a teammate.”

After the video referee and the officials on the pitch have confirmed a decision, a 3D visualization of the offsides penalty is available to clearly communicate the infraction.