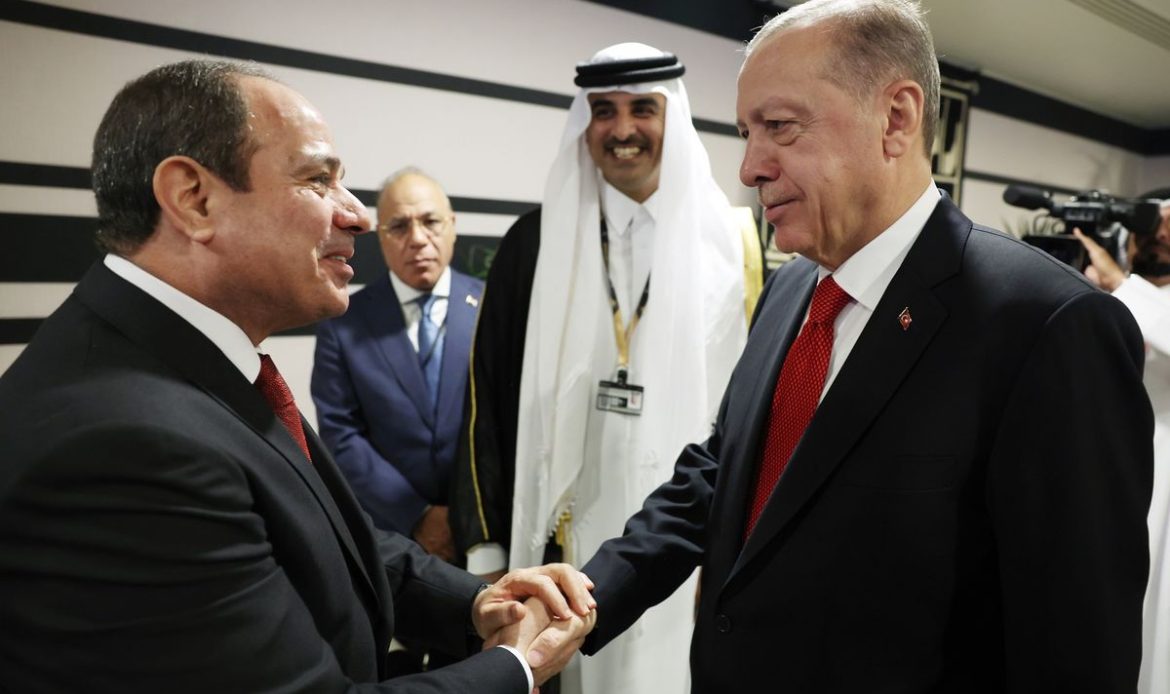 Football diplomacy brought Egyptian President Abdel Fattah al-Sisi and Turkish President Tayyip Erdogan together in Doha for the opening of the World Cup 2022 in Qatar.

Years of tension between the two were broken with a friendly handshake.  The big differences between the two large countries centered on Erdogan’s support of the Muslim Brotherhood, a terrorist organization banned in Egypt, Syria, Russia, Saudi Arabia, and UAE, but not banned in America.

Erdogan said later that the ministers of both countries will meet and begin a process that may develop into talks to build the relationship between the two.  The sideline meeting lasted about 45 minutes at the World Cup.  Sisi released a statement that the meeting was a new start in bilateral relations between them.  Intelligence delegations from the two sides met in Egypt recently.

“We had narrowly focused talks with Mr. Sisi there and said now let’s have ministers coming and going at a low level. After that, let’s broaden and widen these talks,” Erdogan said, also signaling the possibility of improving ties with Syria.

Erdogan had strongly supported Mohamed Mursi of the Muslim Brotherhood as the first elected President of Egypt, following the US-engineered election which saw Lila Jafaar, a US citizen from California, sentenced to five years in prison, in absentia, for election meddling. She was rescued from hiding in the US Embassy in Cairo by Secretary of State Hillary Clinton.

In 2021, Erdogan began a push to repair broken relationships with Egypt, the UAE, Israel, and Saudi Arabia.  Erdogan’s support and personal allegiance to the ideology of the Muslim Brotherhood, which seeks to create a global Islamic State, has been the source of contention between Turkey and other countries.

Turkish Foreign Minister Mevlut Cavusoglu told reporters on November 28 that Ankara and Cairo may restore full diplomatic ties and re-appoint ambassadors “in coming months”.  According to a senior Turkish official, “significant” discussions had begun between them, and Turkey and Egypt are set to start talks on military, political, and commercial issues including energy projects.

Ankara wasted no time in directing Turkey-based media outlets associated with the Muslim Brotherhood and opposed to Egypt’s government, to stop attacking the Egyptian government.

Turkish private hospitals that carry out organ transplants for foreigners are also under scrutiny by Turkish Intelligence for their links to the Muslim Brotherhood which may have supplied the harvested organs from soldiers and civilians killed in Syria.

Turkey has shut down charities that raised funds for people in Yemen and Syria because of their ties to using the funds to support terrorism.

The Muslim Brotherhood and Turkey

Erdogan backed terrorists of all types and nationalities in his effort to overthrow Syrian President Bashar al-Assad to install a US-backed Muslim Brotherhood government.  Once ISIS became a dominant force among the terrorists in Syria, Turkey turned a blind eye and instead focused on attacking the Syrian Kurds who had become military partners with the US occupation forces.

The Justice and Development party (AKP), Erdogan’s ruling party, wanted to dominate regional politics by hosting the headquarters of the Muslim Brotherhood’s international organization. Brotherhood leaders moved to Turkey and created a network of support forming branches into Syria and the oil-rich Arab Gulf monarchies.

Turkey became the designated depot for weapons the US confiscated in their attack on Libya with the shipment arriving in the southern port of Turkey and then trucked into Syria by Turkish intelligence officers. Turkish Intelligence officer Irshad Hoz was arrested in Egypt for supplying weapons to Muslim Brotherhood terrorists there in the uprising to oust Mursi.  Many of the wanted fugitives later were taken in by Turkey.

In 2019, the US Treasury put sanctions on Turkey for support of ISIS networks.

“These jihadists, which include ISIS, have really entrenched networks inside Turkey,” said Merve Tahiroglu, Turkey program coordinator at the Project on Middle East Democracy (POMED).

“It is very unnerving but at the same time quite believable that Turkey hasn’t been really going after these jihadist networks because Turkish law enforcement has been busy hunting down dissidents and government critics,” Tahiroglu told Voice of America.

The Obama administration’s support of the MB

US President Obama supported the rise of the Muslim Brotherhood during the 2011 “Arab Spring” and sought to use the terrorist group as the rulers of a “New Middle East” while aligning with the US and Israel.

“The decision to engage the Muslim Brotherhood marked a historic change in American foreign policy, created a new paradigm in the Middle East, and set into motion a series of events that had catastrophic results: the Muslim Brotherhood’s resurgence, the overthrow of at least two governments, Al-Qaeda in Iraq’s transformation into the ISIS [the Islamic State group] caliphate, failed governments in Syria and Iraq, millions of refugees and displaced individuals, and the resulting destabilizing migration flows,” Rossomando writes.

“The Arab Spring began with rhetoric about freedom and democracy, but we now know it was an Islamist Spring that brought only death, suffering, and oppression. Who knows what might have been had Barack Obama stood against the Brotherhood and its supporters,” concludes Rossomando.

The Muslim Brotherhood has a lengthy criminal and terrorist record, starting from the 1940s in Egypt and then moving to other countries. Long before ISIS and al-Qaeda, Abu Bakr al-Baghdadi, Osama bin Laden, and Ayman al-Zawahiri belonged to a common ideological precursor, the Muslim Brotherhood. Although their strategies may differ, all three groups maintain a shared vision of establishing a global Islamic State.