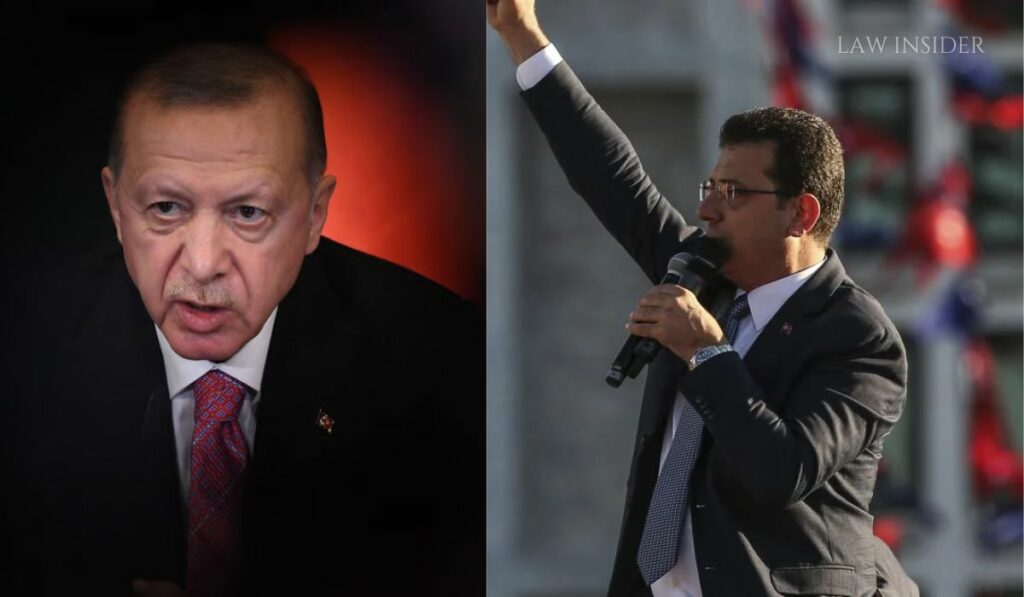 Turkish President Recep Tayyip Erdogan faces a tough re-election vote in six months.  His rival, the Mayor of Istanbul Ekrem Imamoglu, is very popular and far ahead in the polls.

Erdogan went back in time to find an obscure statement made by Imamoglu in 2019 which Erdogan used to order the Turkish courts to try Imamoglu on the charge of ‘insulting electoral officials’.

On December 14, Imamoglu was sentenced to 2 years, 7 months, and 15 days of prison, and was banned from politics.

The US reaction to Erdogan’s move to rig the election

On December 15, Ned Price, US State Department Spokesperson said, “The United States is deeply troubled and disappointed by a Turkish court’s verdict against Istanbul Mayor Ekrem Imamoglu, sentencing him to two years and seven months in prison and banning him from political activity.  His conviction is inconsistent with respect for human rights, fundamental freedoms, and the rule of law.  We remain gravely concerned by the continued judicial harassment of civil society, media, and political and business leaders in Turkey, including through prolonged pretrial detention, overly broad claims of support for terrorism, and criminal insult cases.

We urge the government to cease prosecutions under criminal “insult” laws, and to respect the rights and freedoms of all Turkish citizens, including by ensuring an open environment for public debate.”

The Erdogan-Biden relationship has been weak despite Turkey being an ally, a fellow NATO member, and hosting a US airbase in Incirlik.  Turkey and the US are on opposite sides in northeast Syria, and Turkey is expected to increase their attacks on the US military’s partner there, the Kurdish SDF.

Erdogan’s polling is so low for many reasons.  From 2011 he supported the US-NATO war on Syria for regime change. The Obama plan failed, and Turkey suffered from the effects of the support for the failed US-sponsored project.

His ruling AKP party aligned with the Muslim Brotherhood united Turkey with Qatar but broke its relationship with Egypt, Saudi Arabia, and UAE. He began an Islamist transformation from a secular democracy.

International terrorists were hosted by Erdogan as they transited through airports and set up headquarters in camps on the Syrian border.

In response to the terrorists battling the Syrian government, Syrian refugees who aligned themselves with the Muslim Brotherhood flooded Turkey in the millions as they sought protection under Erdogan and his Muslim Brotherhood-aligned party, AKP.  After 12 years of 3 million Syrian refugees living in Turkey, Turkish citizens have grown to hate and resent the refugees for racial, and economic reasons.

Turkey lost its biggest export market in 2012. Turkish exports to Syria represented 50% of all global Turkish exports, but in 2012 the Syrian government banned imports from Turkey because they participated in the US-NATO attack for regime change.

This huge loss to the Turkish economy began a downturn that saw the currency devalued and hyperinflation. Turkish citizens are suffering the loss of a prosperous lifestyle robbed of them by Erdogan’s failed foreign policy.

Cemil Cicek is a former parliamentary speaker from Erdogan’s ruling AKP, who also has served as deputy prime minister and justice minister, and is now a member of the Turkish Presidency’s High Advisory Board.

“If you decide on a one-sentence defamation claim after such a long time, and at such a critical threshold, neither the legality nor the accuracy of your decision will be convincing,” said Cicek of the Imamoglu sentence, and added “I don’t believe that it is credible either. This both harms the judiciary and a lofty concept such as justice. It will do a lot of damage to the country as well.”

Bulent Arinc, former parliamentary speaker and one of the founding members of the AKP also slammed the court’s decision on Imamoglu. “The court’s verdict is a shame and a despair for the Turkish judiciary,” Arinc said.

The Mayor of Istanbul

Ekrem Imamoglu is a Turkish businessman, building contractor, and center-left politician. First elected as Mayor of Istanbul with 4.1 million votes and won with a margin of 13,000 votes against his AKP opponent in the March 2019 mayoral election as the joint Nation Alliance candidate, but served only from April 17, 2019, until May 6, 2019, when the election was annulled on orders of Erdogan. Imamoglu was then reelected in a renewed election on June 23, 2019, by an even larger margin of 800,000 votes.

Condemning the decision in 2019, Imamoglu said “Those who canceled the election are fools.”

The opposition to Erdogan

The opposition parties are united in their goal to defeat Erdogan

200 thousand Turkish citizens gathered in Sarachane in support of Imamoglu and protested his prison sentence. The setting of the rally was the site of the July 15, 2016 coup attempt to overthrow Erdogan’s government.

The leaders of the six opposition parties gave speeches to the crowd and stressed justice and the ultimate victory awaiting the nation.

IBB President Ekrem Imamoglu spoke to the crowd, “I will tell you: The people who run this country are sick, very sick. These are people who are allergic to the will of the nation.”

Referring to Erdogan and his nepotism and cronyism, “You manage some interest groups, elected associations, close family foundations, and some dark circles. They have established an order of waste in Istanbul and they want it to last forever. This was an order that enriched the wealth of a handful of people and hurt the people of Istanbul,” said Imamoglu.

“If 16 million Istanbulites are not equal in your eyes; If you do not see our 85 million citizens of the Republic of Turkey,” he said and added, “You showed your day to those who want to set a barrier to your will three and a half years ago and twice. You will show it again; I have no doubt. Never lose your hope.”

CHP Chairman Kilicdaroglu said “In Turkey today, no one feels safe. The rule of law is not the rule of the superiors. No one speaks to the one who has an uncle. But when a teenager tweets, there is a knock on his door early in the morning and he is taken into custody. We will finish this scene. Don’t worry. You will never, ever experience these sights again.”

IYI Party Chairman Aksener said forcefully, “Democracy is ours. The ballot box is ours.”

Uysal, Chairman of the Democratic Party said, “May 6, 2019, is the date of a major break for Turkish democracy. It is the date when the main pillar of our democracy collapsed.”

The Chairman of the Future Party, Davutoğlu said “Yesterday, the judiciary became politicized. But our issue is above politics. We are here as six general presidents. We are in different political parties. But we all say ‘Honor’ with the same loud voice. We call it ‘fundamental rights and freedoms’. We call it the ‘democratic state of law’.