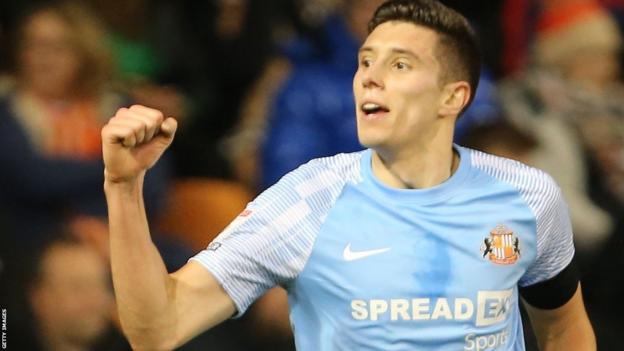 Ross Stewart’s sixth goal in five games helped Sunderland secure a point at struggling Blackpool, who had Callum Connolly sent off late on.Scotland striker Stewart, who now has a goal in each of his four matches since returning from a troublesome thigh injury, glanced in Trai Hume’s header to level at the Stadium of Light.Shayne Lavery opened the scoring for Blackpool in the first half when he galloped onto a pass from CJ Hamilton and fired past Anthony Patterson.Amad Diallo hit the crossbar, as did Stewart before his leveller, and it proved a nervy finish for the 10-man Seasiders once Connolly went off for a second bookable offence in added time.Tony Mowbray’s Sunderland remain in the top six, while Blackpool are now third from bottom.There was already plenty of goalscoring burden on Stewart before Ellis Simms’ recall by Everton this week, but the ‘Loch Ness Drogba’ continued to rise to the challenge.However, the turning point for Mowbray in terms of a promotion bid could be whether the owners can brace themselves for the potential interest in Stewart which may follow in January.Another positive for Sunderland has been their ability to achieve results without chief playmaker Alex Pritchard, as Diallo proved a useful foil and creative outlet in this hard-earned draw.Defeats for fellow strugglers Huddersfield, Rotherham and Cardiff meant a draw was a useful result for Blackpool against a side at the other end of the table.Ian Poveda was a bright spot for Blackpool throughout, drawing a number of fouls from Sunderland, while Lavery showed poise with his finish.Blackpool boss Michael Appleton told BBC Radio Lancashire:”For 60, 65 minutes, we really went toe-to-toe with them. It was a really good game. It felt like a game of basketball really.”We knew that to compete and to get something from the game it had to be like that. That second goal eluded us, we had a couple of opportunities, and when it did and they got their equaliser it became difficult.”But the lads stood up to the pressure excellently, defended excellent at times, because of the way we defended and contributed in the first half I felt we deserved something from the game. Arguably they’re the best side that came here this season.”Sunderland boss Tony Mowbray told BBC Radio Newcastle:”I don’t think they were dominating first half, I just don’t think we were as good as we needed to be and we started pretty slowly.”We changed formation first half to give us more forward targets and once we did that we started to control the game after 20, 25 minutes.”We’re left really frustrated we didn’t go on to win the game, that’s fair, there was only one team going to win in the second half because the chances kept coming and we kept missing them. It’s good that we’re disappointed coming away in the Championship and not taking three points.”

football Scotland
Previous ArticleHow Technology Is Helping Retailers Through the Labor Shortage.
Next Article When will Cristiano Ronaldo play for Al Nassr?