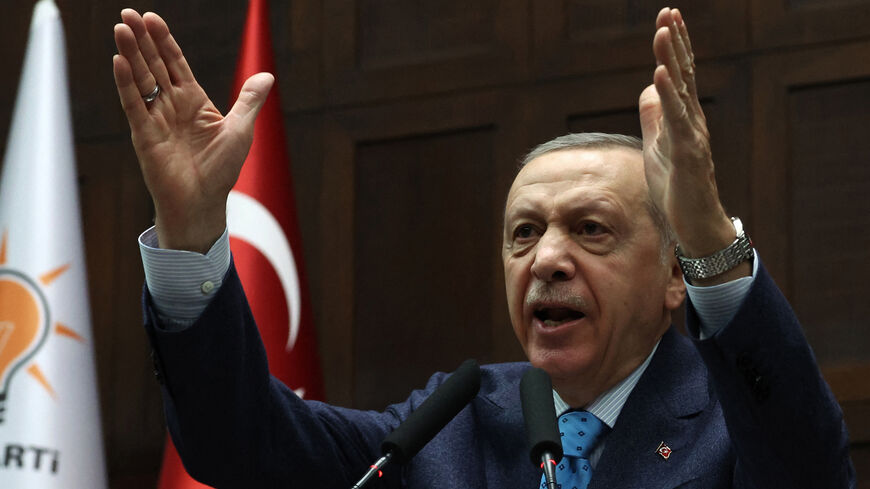 Turkish President and leader of the Justice and Development Party (AKP) Recep Tayyip Erdogan speaks during a group meeting at the Turkish Grand National Assembly in Ankara on January 18, 2023. (Photo by Adem ALTAN / AFP) (Photo by ADEM ALTAN/AFP via Getty Images)

Participation of Turkey’s leader Recep Tayyip Erdogan in the upcoming presidential election does not violate the constitution, which prohibits a person from holding office for more than two consecutive terms, Turkish Justice Minister Bekir Bozdag said on Thursday.

“It is Erdogan’s constitutional right to run for office, there are no legislative obstacles to this. The first president was elected in 2018 in accordance with the transition to the presidential system following the referendum [of 2017]. Therefore, Erdogan will run for the second time,” Bozdag stated.

Under amendments to the Turkish constitution approved by the 2017 referendum, no person may be elected to the presidential office for more than two consecutive terms. Opposition has accused Erdogan of violating the law, saying that he would run for a third term since he had also served as president from 2014-2018 before the constitutional reform.

The Turkish presidential and parliamentary elections are scheduled for June 18, 2023.

Earlier in January, Erdogan said that the general election could be rescheduled to an earlier date “in light of seasonal circumstance,” hinting at holding the vote on May 14, a month earlier than planned.

Turkey’s Nationalist Movement Party (MHP) and the ruling Justice and Development Party have supported Erdogan as their single candidate. Six opposition parties have also agreed to nominate a common candidate but have not announced a name yet.