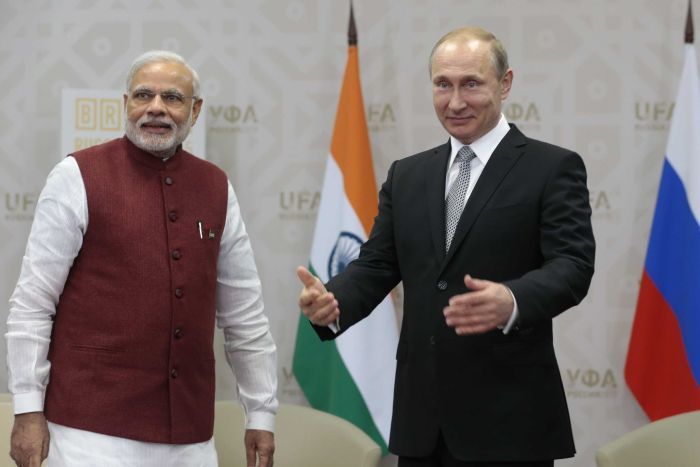 Credible reports have been circulating that this year’s Eastern Economic Forum in Vladivostok will see the formalization of the Vladivostok-Chennai Maritime Corridor between the Russian Far East and India, which would be the key to comprehensively diversifying Russia’s “Pivot to Asia” and “balancing” China.

“Rusi-Hindi Bhai Bhai” (“Russians and Indians are brothers”), the Soviet-era slogan celebrating the Russian-Indian Strategic Partnership, is back with a bang as these two Great Powers take their relations to the global level ahead of Prime Minister Modi’s upcoming visit to the Eastern Economic Forum in Vladivostok later this week as President Putin’s guest of honor. Credible reports have been circulating that they’ll formalize the Vladivostok-Chennai Maritime Corridor (VCMC), which would be the key to comprehensively diversifying Russia’s “Pivot to Asia” away from its current dependence on China if it comes to pass. Russia, just like India, is very sensitive about becoming dependent on any single partner, which is why these two have been rapidly moving to restore their historic relations after the long lull that sent in after the end of the Old Cold War because they believe that their counterpart can help them “balance” (or “multi-align” in Indian strategic parlance) between other Great Powers (namely China in this specific context) in the emerging Multipolar World Order.

The VCMC is the perfect manifestation of this strategy because it’s economically driven and therefore can’t officially be regarded with suspicion by China. The concept is simple enough, and it’s that Russian resources from both the Far East (and also the Arctic) will be exported through the Sea of Japan, the East China Sea, the South China Sea, and the Andaman Sea en route to the Bay of Bengal, with the energy basis of this corridor eventually expanding to include real-sector economic trade as well. With time, it can also naturally evolve to include Japan, which is India’s joint co-founder of the “Asia-Africa Growth Corridor” (AAGC) that’s informally supposed to fill the niches that China’s Belt & Road Initiative (BRI) neglects and therefore partially compete with it in a sense, as well as those three Great Powers’ mutual Vietnamese, Indonesian, and other partners along the way. Not only could it create the pretext for Russia to expand its naval influence in the so-called “Indo-Pacific” through regular patrols along this route, but it could also fulfill the same role for India too.

In fact, there have been reports floating around since the end of last year that Russia and India are interested in signing a LEMOA-like military logistics pact with one another for using some of each other’s military facilities on a case-by-case basis just like India has already clinched with the US and France. From the Russian perspective, this could enable Moscow’s return to the Afro-Asian (“Indian”) Ocean, while India could establish a regular naval presence in the Sea of Japan as a “mirror response” to China doing the same in the aforementioned ocean via what some have described as the so-called “string of pearls” strategy. It’s this second-mentioned element that makes a prospective LEMOA-like pact so strategically enticing for Russian decision maker since it would structurally amount to “balancing” China, albeit indirectly and in a non-aggressive way that could always be “plausibly denied”. That scenario would be a dream come true for India because its political culture places a heavy emphasis on symbolism for both internal and external messaging purposes.

It could even be the case that India’s intense interest in investing in the Russian Far East is partially designed to “sweeten the deal” and make this LEMOA-like pact possible. From the Indian strategic standpoint, the dispatch of regular “freedom of navigation patrols” along the VCMC would strengthen its presence in the South China Sea and also set the precedent of expanding its naval influence along China’s eastern coast as well. This wouldn’t be militarily significant in any substantial sense but it would nevertheless provide symbolic leverage for India to use vis-a-vis its other “balancing”/”multi-aligning” act between the US and China, all facilitated by Russia through the prospective LEMOA-like pact and therefore making Moscow’s partner even more geostrategically indispensable than it already (believes that it) is. So long as the “brotherly” trust between Russia and India can be maintained, then this enhanced international role could work out to both of their long-term benefit, but it shouldn’t be forgotten that these grand plans hinge on the successful creation of the VCMC.