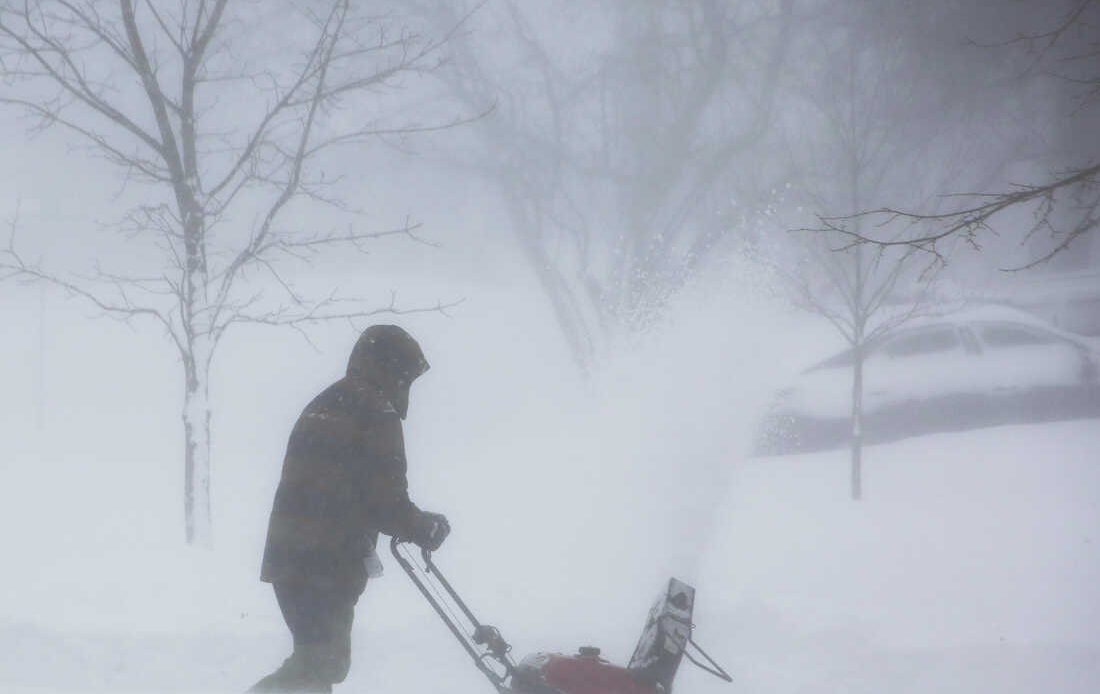 A dangerous storm disrupts travel and knocks out power across the U.S.

The massive, deadly winter storm bringing whiteout blizzards, stinging winds and frigid temps well below average to much of the U.S. continues to cause Christmas weekend travel havoc, power outages to hundreds of thousands and warnings from officials about potentially life-threatening conditions.The National Weather Service Weather Prediction Center said weekend “temperatures will be 25 to 35 degrees below average from east of the Rockies to the Appalachians.” Two-thirds of the eastern portion of the country is expected to experience sub-freezing low temperatures on Saturday evening, while parts of the region will be dealing with anywhere from 5 to 28 inches of snowfall, according to the NWS.The weather forecast agency warned of dangerous wind chills across central and eastern parts of the U.S., and said the severe weather “will create a potentially life-threatening hazard for travelers that become stranded, individuals that work outside,” livestock and pets.The NWS also forecast lake-effect snow downwind from the Great Lakes as well as “heavy mixed precipitation to impact the Pacific Northwest and the Northern High Plains” over the weekend.At least six people were reportedly killed in vehicle crashes, with at least four dead in a massive pileup on the Ohio Turnpike involving about 50 vehicles. In Washington state, several major highways were shut down after freezing rain created “extreme weather conditions including avalanche danger,” according to the National Weather Service.A woman walks along Chicago’s Michigan Avenue as she braves Friday’s frigid weather.Kamil Krzaczynski/AFP via Getty Images”Mother Nature threw the kitchen sink at us this time,” New York Gov. Kathy Hochul said at an emergency center in New York City’s Queens borough on Saturday morning. “I’m fully expecting to see the kitchen sink fall out of the sky because we’ve been hit with everything from wind and flash freeze and unprecedented velocity of wind. As well as the snow, ice and flooding.”More than 8,000 residents in New Jersey and New York were without power after the storm hit on Dec. 22 and 23. Four families from the Queens borough were displaced from their homes, according to Gothamist.Meanwhile, WPLN’s Paige Pfleger reported that plunging temperatures are putting pressure on a power grid not accustomed to this cold, and that the Tennessee Valley Authority has asked local utilities to cut their electricity use. Customers in Nashville will experience 10-minute outages every few hours, until the power load stabilizes.Scott Aaronson, vice president of security and preparedness at the Edison Electric Institute, a trade association for power companies, said that getting the power restored in weather like this is a significant challenge.In New Jersey, heavy rains and high winds downed power lines and sent floodwaters surging as high as 9 feet along the coast. Interior locations along the Hudson River also flooded.New York Gov. Kathy Hochul asked people in the state to wait until Sunday to travel because road conditions would remain dangerous through Saturday.”So that, unfortunately, really affects anyone who’s got a connecting flight, and we’re going to see a lot of people missing connecting flights with these long delay times,” Bangs said.Reporting from Bruce Konviser, WPLN’s Paige Pfleger and Blake Farmer, NPR’s Mary Louise Kelly, Giulia Heyward and David Schaper and the Associated Press was used in this report.

This article was originally published by NPR.

electrical power USA winter
Previous ArticleUS-China chip war: How the technology dispute is playing out.
Next Article how can you travel in style.