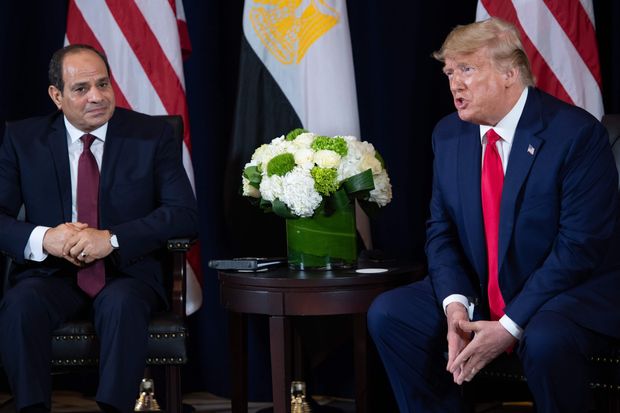 Washington’s latest attempt to dissuade an ally from making arms deals with Russia came in the form of a letter sent on last Wednesday to Egyptian officials warning them that they could face sanctions if they continued with their $2 billion dollar Su-35 fighter jets contract.

Russia has become one of Egypt’s major arms suppliers. This particular arms between Egypt and Russia for ten fighter jets was signed at the end of 2018, with delivery of the Su-35 Flanker-E air superiority fighter aircrafts as well as weapons for the planes starting in 2020-2021.

In order to counter Russia’s expanding military influence in the Middle East and dissuade countries from buying Russian-made arms, the Countering America’s Adversaries Through Sanctions Act (CAATSA) was signed by President Donald Trump in August 2017. Countries that are trading with Russia’s defense or intelligence sectors could face secondary sanctions.

Russia estimates that since 2014 it has lost $760 million dollars in potential weapons sales due to the international sanctions sealing off the U.S. market.

However, the CAATSA is not limited to sanctioning Russia and those who purchase Russian-made weapons, this U.S. Federal law also imposes economic sanctions on Iran and North Korea.

The first case for secondary sanctions under CAATSA took place in September 2018 when sanctions were imposed by the Trump administration on the Chinese military for purchasing 10 Su-35 aircrafts and S-400’s from Russia, also 33 people and entities were blacklisted due to links to Russian military and intelligence.

The second case would be Turkey’s purchase of Russia’s S-400 air defense system with the first delivery of its components having taken place in July of this year. As a result of going through with their purchase and delivery, Turkey was also suspended from participating in the F-35 program and the F-35 air systems it had already purchased are now under U.S. control.

Although requirements have been met for CAATSA to be enforced there is a gray area as to how, and to what extent the sanctions should be applied. A waiver is also in place that the president can use. Also, both the U.S. executive and legislative branches play a role in determining the action that would be taken against Turkey for doing business with Russian personnel targeted by sanctions.

India is paying close attention to how the US is reacting to Turkey’s purchase as they too have purchased Russia’s S-400 SAMS system which would put them in conflict with the CAATSA as well. However, relations between India and the United States are strong and the likelihood that a waiver will be used to avoid making India suffer collateral damage is likely.

For the past decade Russia has been expanding its military influence in the Middle East, much to the dissatisfaction of the United States. Russia and Egypt’s military and technical cooperation has been deepening and expanding for years.  Both nations have repeatedly held joint naval and airborne counterterrorism exercises since 2015. From October 27th till November 7th of this year the Egyptian air force’s tactical training center near Cairo hosted joint Russian/Egyptian military drills dubbed Arrow of Friendship-1.

There’s even been speculation about the prospect of Russia setting up a military base in Egypt, due to the increase of Russian activity on Egyptian grounds. Just two years ago a draft agreement which would “allow each side to use the other’s airspace and air bases” was approved by Moscow and Cairo. Even though it didn’t specify setting up a military base it did set the ground for significant expansion in military cooperation between the two countries.

While the US fumbles around in the Middle East leaving death and destruction in its tracks, Russia has become the main peace broker. While maintaining good relations with all the major players in the region, Russia intervened militarily in Syria at the request of Syrian President Bashar Al Assad to fight terrorism and derail a strong regime-change plan by the Obama administration. Relations and business with Iran and Turkey have also increased.

Moscow knows that security in neighboring countries directly impacts its own and standing by allies will only help grow its influence and positive image in the Middle East and beyond.