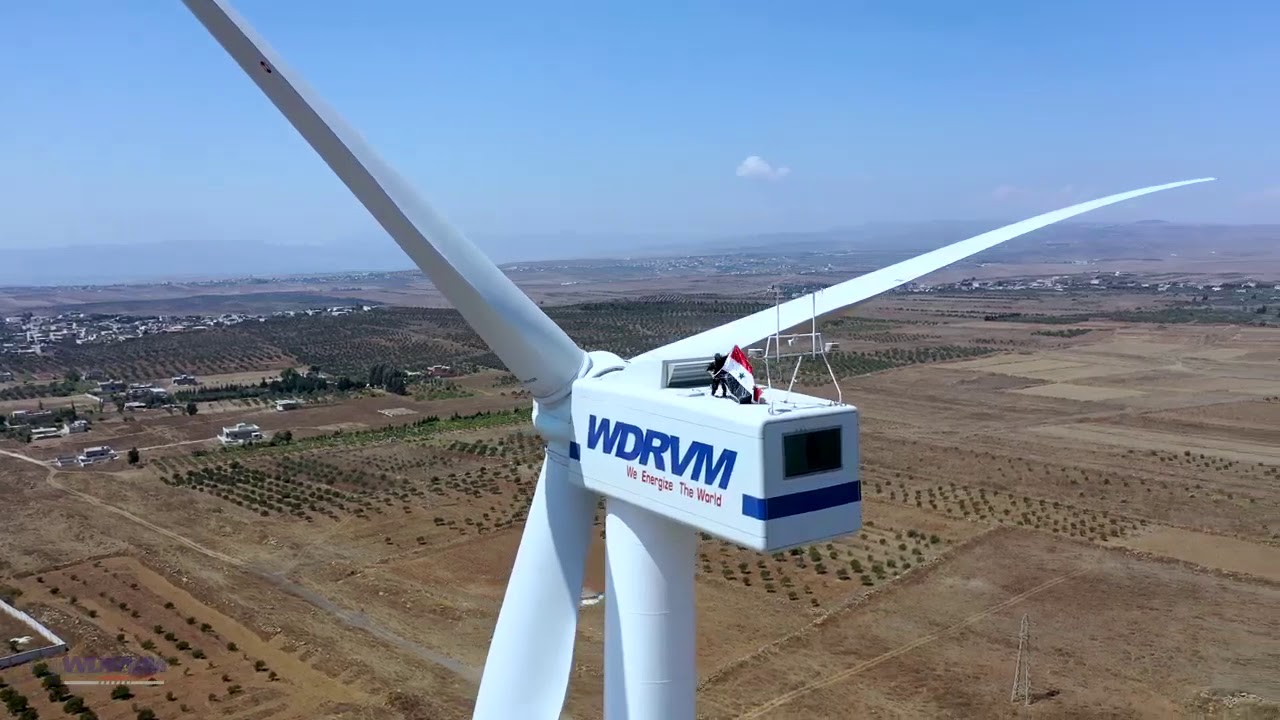 With national expertise and through Syrian cadres, WDRVM company for renewable energy and heavy industries has succeeded in manufacturing, assembling, installing and operating a wind turbine with all of its components for the first time in Syria, the Middle East, the Gulf and North Africa.

Syrian experts of engineers, technicians and workers have overcome all obstacles encountered in the current circumstances, unilateral coercive measures and the economic siege imposed on the Syrian people as they were able to complete the manufacturing of the turbine with all its components from the tower and blades and control devices with high accuracy.

The turbine matches the international specifications and installed in al-Sindyana village in al-Zahabyia area west of Homs on the Homs-Tartous Highway, 20 km from the city of Homs.

Rabi Walid Elias, CEO of the company, told SANA reporters at the wind turbine installation site that the turbine has a capacity of 2.5 MW, and it was manufactured and operated by 100% national cadres and expertise. 300 MW of electricity has also been generated so far a few days after its operation.

Elias pointed out that the first turbine has been installed, and operated under the supervision of Executive Director Valerina Walid Elias.

He added that preparations are underway to move the crane that installed the first turbine to the second site to install the second turbine, which has the same capacity and it has been fully manufactured, indicating that the turbine is eco-friendly and does not make any noise and can illuminate between 3,000 and 5,000 homes and it obtained all the international certificates such as Germanischer Lloyd GL, ISO, and other international certifications.

Elias pointed out that the installation of 1,500 wind turbines saves between 700 and 1,000 billion Syrian pounds spent on fuel and gas annually, and provides electricity to more than 18 million people.

He noted that 11 companies in the world are manufacturing wind turbines and that the company “WDRV” is the number 12, and It is the only company in the Middle East and the Gulf and North Africa, and it is competitive in terms of size, technology and manufacturing.

All wind turbine components are manufactured from the base to the blades in the blade manufacturing plant at the company by Syrian cadres under the supervision of the Executive Director Marquis Walid Elias.

Elias affirmed the company’s ability to compete and export to all countries of the world with the possibility of manufacturing between 80 and 100 turbines per year.

The installation of the turbine requires high skills and special equipment, where the base of the tower weighs 1,800 tons of cement and iron, which is resistant to earthquakes up to 10 degrees on the Richter scale, in addition to the protection of the turbine from lightning. The head of the turbine weighs up to 120 tons and the length of each blade is 50 meters and it weighs 12 tons. The wind turbine also consists of three blades and a rotary head weighing 30 tons, all rotate 24 hours a day for 25 years non-stop.

Elias said “Regarding the selection of the wind turbine site on the Homs-Tartous Highway at the Shin Ben Elias Bridge after coordination and cooperation between the company’s expert cadres and the Energy Research Center at the Ministry of Electricity they agreed upon the site as it is one of the windiest locations in the Middle East.”

Elias referred to the offers made to the company from several neighboring countries to export turbines to it after achieving remarkable success in Syria, pointing out that the company’s management was keen to work in Syria because it deserves this uniqueness and success, hailing the hard efforts made by workers, technicians and engineers who turned the dream into reality through this achievement.

In turn, Eng. Shadi in charge of the Department of Turbine Control said that the turbine operates according to an integrated control system consisting of several systems, each system is different from the other, and it is led by one system which consists of more than 800 parameters of entrances and many exits and deal with times of milliseconds and nanoseconds, and it is the first this technology enters Syria.

Eng. Shadi indicated that the system enjoys great advantages and few errors and conducts instantaneous monitoring of milliseconds and manages and handles them with full national expertise, pointing out that all logistical problems have been successfully overcome and performance and testing tests are carried out in a record time, and currently, the project is ready and successfully completed.

For his part, Engineer Farouk, Design Director who is responsible for the implementation at the company said that the height of the tower on which the turbine was installed is 80 meters and the diameter of its rotor is 103 meters and the capacity of the turbine is 2.5 megawatts, and the tower is made of a metal which matches the global systems, and it has been examined and welded according to the highest international standards which are related to Wind Turbine Manufacturing System.

Farouk explained that the workers have challenged all weather conditions for the success of this project, where the company bought the crane and made it join its vehicles fleet which transport and install wind turbines, adding that the crane is the first of its kind in Syria and the neighboring countries in terms of size, capacity and technology, and it weighs up to 1,300 tons and is able to lift equipment up to 650 tons at altitudes of up to 168 meters.