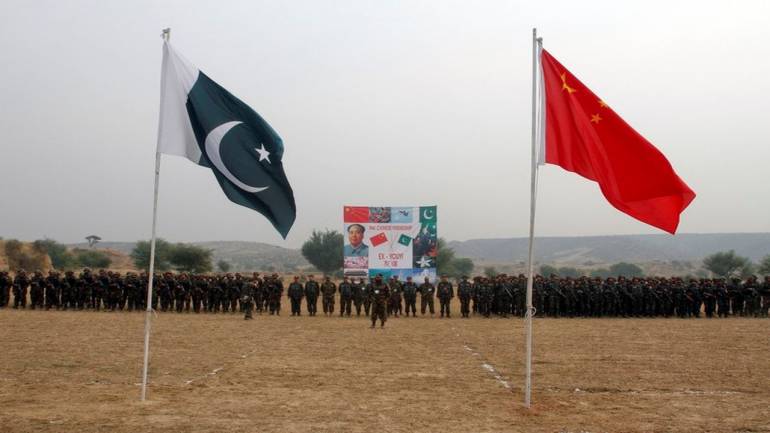 A New Pipeline Could Undo America’s Influence in Asia

From the moment that the U.S. re-imposed sanctions in earnest on Iran late last year, Pakistan has been looking at ways to resuscitate a deal that had been agreed in principle before the U.S. unilaterally withdrew from the Joint Comprehensive Plan of Action (JCPOA) last May. This deal involved moving as much gas as Pakistan needs from Iran’s Asalouyeh into Pakistan’s Gwadar and then on to Nawabshah for further transit if required. At the same time, China has been in long-running discussions with Pakistan over the specific projects that Beijing wanted to place in Pakistan as part of its ‘One Belt, One Road’ (OBOR) programme. All the while, the U.S. has been trying to stymie any such arrangement but OilPrice.com understands that the Iran-China-Pakistan deal is now back on, and with a vengeance.

China’s covert strategic deals are virtually always buried in interminably long anodyne statements that belie the true laser-focused intentions of Beijing and this time is no different. Joint statements just over a week ago from both Pakistan and China sides laid out four projects that are part of a ‘broader co-operation’ between China and Pakistan. They all sound relatively run-of-the-mill affairs, although still major undertakings, and are: the upgrading of the Pakistan Refinery Karachi, the building out of a coal to liquid engineering plant based on Thar coal at Thar Sindh, the utilisation of Thar Block VI for coal gasification and fertiliser projects, and the finalisation of the feasibility study on South-North Gas Pipeline Project that traverses Pakistan.

The fact that they are much more significant to the global geopolitical balance was evidenced by the U.S.’s furious warnings to Pakistan, based on the fact that all of these projects are in reality a key part of Beijing’s planned China-Pakistan Economic Corridor (CPEC), which, in turn, is a cornerstone of the OBOR initiative. Even as it was, U.S. South Asia diplomat, Alice Wells, warned that CPEC – which, vitally, includes heavy financing from Beijing and, therefore, a massive debt obligation to China by the host country over time – will only profit Beijing. As it stands, the cost of just the first round of CPEC projects has risen from an initial costing of US$48 billion to at least US$62 billion right now.

“It’s clear, or it needs to be clear, that CPEC is not about aid,” said Wells. “[The CPEC] corridor is going to take a growing toll on the Pakistan economy, especially when the bulk of payments start to come due in the next four to six years,” she added. “Even if loan payments are deferred, they are going to continue to hang over Pakistan’s economic development potential, hamstringing Prime Minister [Imran] Khan’s reform agenda,” she underlined.

The U.S.’s fury would have been much worse if it knew that, in fact, the ‘finalisation of the feasibility study on South-North Gas Pipeline Project’ whilst true, is just proverbially the tip of the iceberg.

“The actual plan is to resuscitate the Iran-Pakistan oil and gas pipelines over time, beginning with the gas pipeline, moving unlimited amounts of Iranian gas to Pakistan, and then into China and the rest of Asia should it be needed,” a senior source who works closely with Iran’s Petroleum Ministry told OilPrice.com last week. “It is being done in conjunction with Russia, with the twin aims of firstly ensuring that China’s ‘One Belt, one Road’ initiative continues to run smoothly from the East through Pakistan and then Westwards into Iran and onwards into Europe,” he said. “And, secondly, to ensure for Russia that Iran’s gas does not start flowing freely into Europe as and when the U.S. sanctions are lifted, as this would undermine Russia’s power over Europe, which is founded on supplying over a third of Europe’s gas,” he  added.

For China, the new pipeline – integral to its plan of making Iran and Pakistan its client states over time – has the added benefit of putting the U.S. on the backfoot in the ongoing trade war. For Iran, the incentives of closer ties with China and Russia are principally financial but also relate to China being just one of five Permanent Members on the U.N. Security Council (the others being Russia, the U.S., the U.K., and France). For Pakistan as well there is the added incentive that it is tired of being lambasted by the U.S. for its duplicity in dealing with international terrorism. Not that long ago, the U.S. accused Pakistan of supporting the Taliban (correct but it was catalysed by the U.S.’s key Middle Eastern ‘ally’, Saudi Arabia), Al Qaeda (correct but catalysed, funded and logistically supported by the Saudis), the Haqqani network (correct but also funded and logistically supported by the Saudis), and Islamic State (sort of correct but that was also mainly, of course, the Saudis) against U.S. forces, despite taking hundreds of billions of dollars in aid payments.

Islamabad has also been an outspoken critic of renewed U.S. sanctions against Iran. Just after the first wave of the new sanctions were rolled out on 7 August last year, Pakistan’s Foreign Office spokesman Muhammad Faisal said that:

“We are examining the implications of the U.S.’s re-imposed sanctions on Iran, however, Pakistan, being a sovereign state, reserves the right to pursue legitimate economic and commercial interests while respecting the international legal regime.”

Later, in his inaugural speech as Pakistan’s then-new Prime Minister, Imran Khan, called for improving ties with the country’s immediate neighbours, including Iran, from whose President, Hassan Rouhani, he also accepted an invitation for an early state visit to Tehran. Bubbling back at that time to the top of the list of practical initiatives that could be advanced quickly was the Iran-Pakistan gas pipeline (IPP), which, according to the Iran source: “[Imran] Khan personally backs and has made a priority project.”

In practical terms, Pakistan certainly needs all the sustainable energy sources it can get. As it stands, the country has seen domestic natural gas production stagnate at around 4 billion cubic feet per day (Bcf/d) against demand of more than 6 Bcf/d, which has led to repeated load shedding in many major cities of up to 15 hours a day. Moreover, the supply and demand disparity is set to become even worse very soon, as industry estimates project that Pakistan’s domestic gas production is set to fall to nearer 2 Bcf/d by 2020, due to aging infrastructure, whilst demand will rise to around 8 Bcf/d by the same time, driven by rising demand from the power, industry, and domestic sectors as the economy continues to grow by around 5% per year. According to Pakistan’s Ministry of Energy (MoE), the planned 0.75 Bcf/d of gas (for five years, in the first instance) that would flow from Iran’s supergiant South Pars natural gas field would add around 4,000 megawatts (MW) of electricity into the Pakistan grid, via a direct Iran-Pakistan pipeline.

The original agreement for the IPP, signed between Iran and Pakistan in 1995, was predicated on the pipeline running from Iran’s supergiant South Pars non-associated natural gas field into Karachi but the most recent iteration of the route involves the gas running from Iran’s Asalouyeh and into Pakistan’s Gwadar and then on to Nawabshah. The latest projection of the cost of the pipeline is around US$3.5 billion, according to industry sources, although US$2.5 billion of this has already been invested in the 900 kilometre stretch on Iran’s side that has already been completed. Pakistan’s 780 kilometre stretch has yet to be started.

Given the geopolitical importance of both Iran and Pakistan to Russia and China, though, as analysed in greater depth in my new book on the global oil markets, finding the money for the remainder of the project will not be a problem at all For China, there is a threefold motivation. First, its plans to integrate the IPP into the CPEC project means that Gwadar is earmarked to be a key logistical node in China’s ‘One Belt, One Road’ initiative. Second, it wants to keep Iran as one of its key suppliers of oil and gas in the future. And third, it regards supporting those who the U.S. opposes as being a central plank of its foreign policy, even over and above the short-term tactic of wrong-footing the U.S. in the ongoing trade war.

“One immediate reaction [of China to the burgeoning trade war with the US], will be to seek to expand and broaden economic links by offering improved market access to non-U.S. companies, by strengthening supply chain links and by replacing American commodities with imports from emerging market nations,” according to Jonathan Fenby, China research chairman at TS Lombard, in London.

“There is a tectonic shift going on that goes well beyond the tariff war, as China seeks to assert itself regionally and tries to establish a wider global role for itself while the U.S. moves from the ‘constructive engagement’ of the Clinton, Bush and Obama administrations to regarding China as a ‘strategic competitor’,” he added.

The U.S. clearly sees it the same way, not just based on the latest comments by Wells but also on the fact that as long ago as January 2010, the U.S. formally requested that Pakistan abandon the project in return for which it would receive assistance from Washington for the construction of a liquefied natural gas (LNG) terminal and for the importing of electricity from Tajikistan through Afghanistan’s Wakhan Corridor.

The original source of this article is OilPrice.com