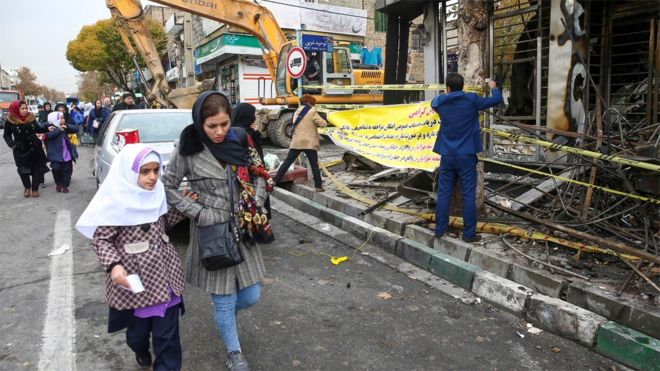 Tehran has said the US should offer compensation to ordinary citizens whose lives have been damaged during the violent protests openly backed by Washington.

Iranians have filed more than 360 lawsuits seeking compensation from the US for the damages caused by the widespread rioting and looting during anti-government protests, as well as for other “crimes committed by the US against our nation,” judiciary spokesperson, Gholam Hossein Esmaeili, told reporters on Tuesday.

Esmaeili accused Washington of inciting and supporting the unrest, stressing that American actions directly hurt ordinary Iranian citizens. The courts have awarded over $130 billion in damages to be paid by the US, he said, adding that the Iranian government must now work towards compelling Washington to pay up.

Interior Minister Abdolreza Rahmani Fazli previously said that between 130,000 and 200,000 people participated in the riots across the country, during which 731 banks, 70 gas stations and more than 300 private vehicles were vandalized or burned. A number of protesters and security personnel were killed in the ensuing clashes.

The protests were initially triggered by the government’s decision to ration fuel and introduce a fuel price hike in a bid to help poor people amid mounting US sanctions on Iran’s energy sector. US Secretary of State Mike Pompeo openly backed the protesters, saying last month: “We support you and we will continue to stand with you in your struggle for a brighter future for your people and for your great nation.”