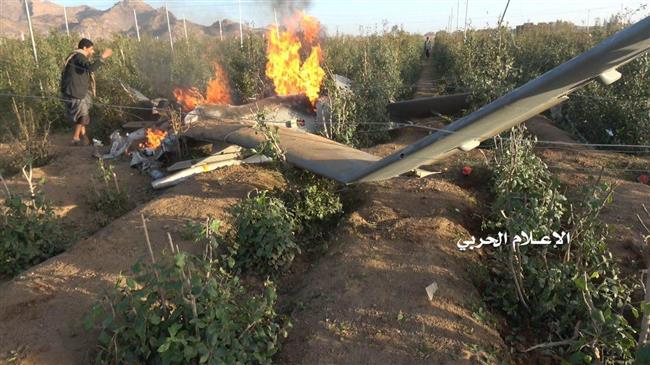 Yemeni forces have intercepted and shot down a third surveillance drone belonging to the Saudi military coalition, flying in the skies over the border of the southwestern Saudi region of Jizan.

The unmanned aerial vehicle was downed with a precision-guided missile over the Jahfan area of the region on Thursday, the Arabic-language al-Masirah television network said.

The spokesman for Yemeni Armed Forces, Brigadier General Yahya Saree, earlier said in a statement that Yemeni forces and their allies shot down Saudi reconnaissance spy drones on Wednesday.

The operations were the latest in Yemen’s retaliatory attacks against Saudi Arabia over its war on the impoverished country. Yemeni forces regularly target positions inside Saudi Arabia in retaliation for the Saudi war.

Yemen, the poorest country on the Arabian Peninsula, has been battered by what the UN describes as the world’s worst humanitarian crisis, which has resulted from the devastating Saudi war.

Saudi Arabia and a number of its regional allies launched the war in March 2015, with the goal of bringing the country’s Riyadh-allied former regime back to power and crushing the Houthi Ansarullah movement.