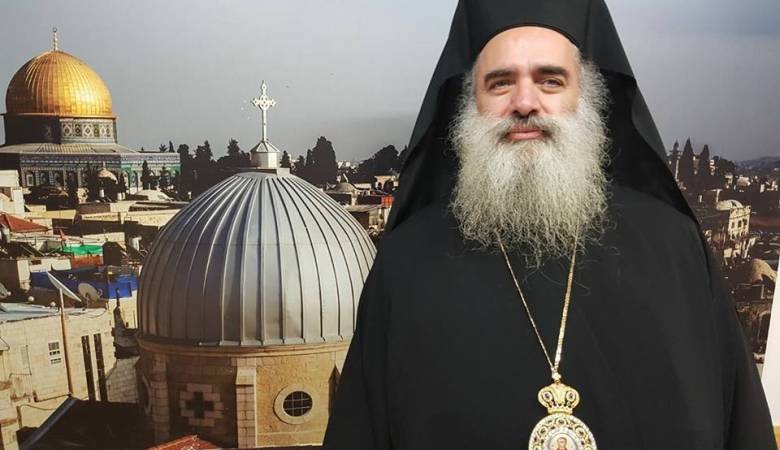 Archbishop Atallah Hanna, of the Greek Orthodox Patriarchate of Jerusalem, was the victim of an Israeli assassination attempt on December 17, just days before Christmas, when an Israeli gas canister was fired into his church in Jerusalem.  He was rushed to the hospital suffering from partial paralysis due to the effects of the poisonous gas.

The Israeli occupation authorities have long held him in disdain because of his outspoken criticism of the occupation of Palestine, and the suffering of its people. Hanna stated last month, “The occupation in Jerusalem is treating us as if we are guests and foreigners in our own city. This is the embodiment of apartheid policies and practices against our people in Jerusalem specifically and in Palestine more generally.”  On December 6 he stated, “We will remain in Jerusalem, defending our religious sites and endowments. We reject the policies of the occupation. We will not surrender. Our motto will always be freedom and dignity for the Palestinian people. Our religious sites will remain ours. Jerusalem will remain ours.”

The ‘First International Conference on Israeli Apartheid’ was held on November 29 in Istanbul.  The occupation of Palestinian land and the treatment of Palestinians as second-class citizens was discussed, and Archbishop Hanna was one of the most outspoken attendees, which was sure to catch the glare of the Israeli officials.

Archbishop Hanna said, “The city of Jerusalem is the city of the three Abrahamic religions…Christian and Muslim Palestinians living in Jerusalem suffer from the occupation, suffer from repression, tyranny, and oppression.”

Comparisons were made to the international outcry which toppled the apartheid government of South Africa, which included boycotts of their products.  The current ‘Boycott, Divest, Sanction’ movement, BDS, was a central theme while calling for principals of equality, justice and dignity for all, and the use of all lawful means to achieve their goal.

Ali Kurk said, “International law is ineffective, as the law of power rules,” referring to the US-EU support for Israel’s apartheid system, and of Israel’s policy of evacuating Palestinian homes in occupied East Jerusalem and either allowing Jewish settlers to inhabit them or destroying them.

The ideology of racial and cultural supremacy is the cause of apartheid.  Rima Khalaf said Israel is “the only nation in the world to confer whole citizenship according to inherited faith.”

Archbishop Hanna cautioned that Israel is conducting a slow ethnic cleansing campaign in Jerusalem, to turn it into a strictly Jewish town. The Christian residents of the city have been disappearing, and now are just 1% of the population. Hanna explained the time has come for both Christians and Muslims to join forces since they are both oppressed from the “Israeli” apartheid, which prevents access to places, jobs, resources, and often health care.

The demographic change instituted by Israel is bent on destroying the two-state solution and utilizes violence and apartheid.  Many have voiced support for the one-state alternative where Palestinians are equal to Israelis and apartheid is abolished.  Palestinians living under occupation have documented violations of individual rights and international law that Israel has committed. The Palestinian struggle involves political and human rights, against settler colonialism, and is not based on religious differences.

“The Holy Land: A Palestinian Christian Perspective”, was the title of a conference held in Johannesburg on October 15. Israel’s strategy to drive all Christians out of their Palestinian homeland is based on immense economic hardships, permanent siege and apartheid, and the severing of communal and spiritual bonds.

The Bethlehem Bible College is a Protestant Evangelical institution headed by Jack Sara, who said, “We are proud of our Palestinian heritage and our national identity.” Archbishop Hanna concurred, “It is important that Palestinian evangelicals communicate with fellow evangelicals around the world and to talk about the Palestinian cause. I disagree that all Christian evangelicals adopt the Zionist narrative.”

70 years ago, Bethlehem, the birthplace of Jesus Christ, was 86% Christian. The city’s mayor reports as of 2016 the Christian population of Bethlehem has dropped to 12 %, just 11,000 people. Israel has built more than 30,000 housing units, and the number of Jewish settlers in Bethlehem today is about 165,000, with 51 miles of the separation wall running through Bethlehem.

Archbishop Hanna had a strong message for Christians throughout the world, “In a few days, Christians will be celebrating Christmas all over the world. The streets and town squares will be decorated with lights, adornments and Christmas trees in Europe and the world. I would like to remind all Christians all around the world: there is no point in celebrating Christmas if you do not pay attention to what is happening in Palestine as it is the birthplace of Christ and where Christianity originated and spread its message throughout the world. The nativity grotto is in Bethlehem. The true light of Christmas emanated from Bethlehem.”

The American and European Christians

“We reject America’s unjust decisions which come in support of Israeli policies and the occupation of Jerusalem.”, said Archbishop Hanna.