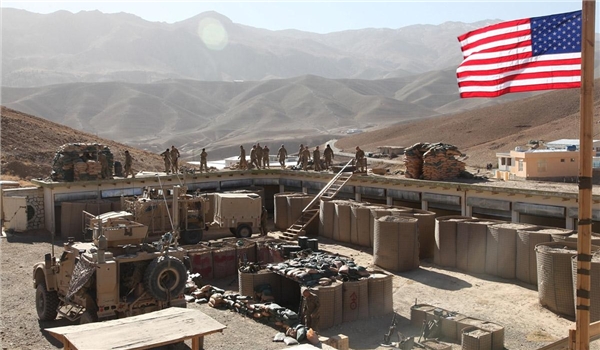 The more than 1,200 US troops illegally occupying eastern Syria are not coming home anytime soon. They are acting as the security guards of the newest American ‘state-owned’ oil company.  The US has always billed itself as a Capitalist nation, and the current US administration has used the word, Socialist as if it was the plague; however, the Trump government is now operating as a Socialist regime, with ‘state-owned’ companies generating revenue, and the US soldiers working as security guards.  The Pentagon lawyers are busy trying to find a legal footing to defend the US position of stealing Syrian oil and selling it to Turkey.  Trump has said multiple times that the US is “keeping the oil”, but has never explained how that could be justified under international law.

“Risking the lives of our troops to guard oil rigs in eastern Syria is not only reckless, it’s not legally authorized,” Senator Tim Kaine, of Virginia, told the AP. “President Trump betrayed our Kurdish allies that have fought alongside American soldiers in the fight to secure a future without ISIS — and instead moved our troops to protect oil rigs.”

The Saudi Arabian Oil Company, ARAMCO, arrived on December 13 in Deir Ez Zor from northern Iraq, with a delegation of petroleum engineers, who arrived by US helicopters, along with Saudi soldiers, who will act as bodyguards for the experts, and accompanied by about 30 trucks carrying essential petroleum extraction equipment.

The Al Omar oilfield, located east of Deir Ez Zor, is one of the main oil and gas fields in Syria. The ARAMCO mission is to repair, increase production, and train production crews while working under contract with the US government.

President Bashar al-Assad recently was interviewed by the Chinese media, Phoenix TV, in which he stated, “Ultimately, the Americans will leave,” but first the fight against all terrorists must continue, and the Syrian residents will unite against all illegal foreign occupiers.  He explained how the US is stealing the Syrian oil and selling it to Turkey, which in the past was done by Jibhat al-Nusra and then ISIS.  He acknowledged that the Kurdish militias were acting under American orders, and added, “The American regime relies significantly in its wars on private firms like Blackwater in Iraq and others. So, even if they had a few hundred American soldiers in Syria, they still also have thousands, maybe tens of thousands of civilians working for such companies and fighting in Syria.” He commented that it doesn’t matter who is in the White House, as it is corporate interests who control America.

The Al Omar oil field is the largest in Syria, and its production reached 270,000 barrels per day in early 2011.  The oilfield was severely damaged as the US coalition bombed it repeatedly once ISIS took control; however, in late 2017 the US-backed Kurdish militia took control of ISIS. Syria produced 350,000 barrels of oil per day before 2011, and exported about half, while today it is down to about 24,000 barrels per day, which doesn’t cover domestic needs. Syria is prevented from importing oil by US and EU sanctions, which has left the civilians suffering from shortages on everything, including medicine.

The US-backed Kurdish militia took control of the northeast of Syria and tried to establish an autonomous administration.  However, once Trump ordered the US troop withdrawal, Turkey invaded the area as they consider the Kurdish militias to be terrorists. In the face of imminent ethnic-cleansing at the hands of the Turks, the Kurds beseeched Damascus to come to their rescue, and a renewed alliance began which saw the Syrian Arab Army and the Russian military police coming into the area to protect Kurdish civilians. Even though the Kurds are depending on the Syrian government for protection, they are still working with the US occupation forces in the oil fields, and on December 3 a delegation of the Kurds traveled to Saudi Arabia to discuss the Al Omar oil field before the Saudi experts’ arrival.

The residents of Deir Ez Zor are not Kurds, and they also don’t like the US occupation there.  President Assad warned the US they may soon face local resistance militias, recalling the US experience in occupying Iraq, which caused heavy loss of American lives.

American armed forces have been digging in and increasing in numbers and equipment, including building 2 new military bases in Deir Ez Zor.  Trump first ordered a withdrawal, and then reversed the order to establish a long-term US occupation in eastern Syria, which is based on stealing the oil, and now he has brought in his Saudi ally to repair and extract the black gold and utilizes the Kurdish militias as facilitators. The US is now in the occupation of 3 major fields in Syria: Al-Omar, Al-Tanf, and Kuniko: the biggest gas facility in Syria, and a crucial power plant.

Defense Secretary Mark Esper said, “That’s our mission, to secure the oil fields”; however, Pentagon spokesperson Jonathan Hoffman and Navy Rear Admiral William D. Byrne Jr. have had a hard time answering press questions concerning the legality of the US stealing Syrian oil. Hoffman offered to deflect criminal blame by claiming the revenue will go to the Kurdish militias, in an apparent ‘Robin Hood’ defense.  The press continued to ask what was the legal basis used for the US military to steal oil from a sovereign nation, but the officials kept saying it came from the commander-in-chief’s authority. They said they would fire upon anyone who tried to take back the oil fields.

“The U.S. is not at war with either Syria or Turkey,” said Stephen Vladeck, professor of law at UT Austin. The basis for war against Syria, a sovereign government, would require approval by Congress.

Xie Xiaoyan, China’s special envoy for Syria, said “Who has given the Americans the right to do this? And, at whose invitation is the US protecting Syria’s oil fields?”, at a press conference in Moscow. He added, “Let’s think the other way around: will the US allow Syria to send troops to US territory to protect oil fields there?”

President Assad has offered China six investment projects as part of its ‘Belt and Road Initiative’ that involves billions of dollars in infrastructure projects. Both China and Russia have been allies of Syria and are all committed to the war of terror.