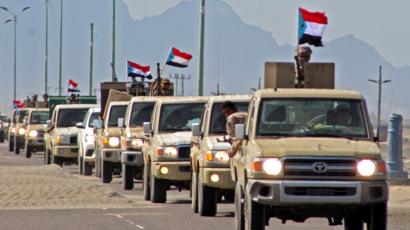 The south Yemeni secessionist movement seeks to undo the Yemeni unification of 1990 and restore a separate independent state of South Yemen.

Separatists from the Southern Transitional Council in southern Yemen took control of 64 billion Yemeni riyals (equivalent to roughly $255.5 million US) on Saturday, with a convoy carrying the cash intended for the central bank in Aden commandeered by militia and redirected to a nearby military base.

In a statement cited by Reuters, the STC, which controls Aden, called the action “part of several measures to end sources of corruption and to prevent the use of public money in supporting terrorism…by some leaders of the Yemeni government.”

In addition, the STC said that the seizure was aimed at preventing the further depreciation of the currency, which it says will now be used to aid governance in areas under its control.

The Saudi-backed Yemeni government denounced the seizure as an act of “piracy.”

The move comes amid escalating tensions between the STC and the Saudi-backed government of Abdrabbuh Mansur Hadi. Both parties had formally agreed to put aside their differences to fight the Houthi militia in November 2019.  However, in May, the STC accused the Hadi government of violating the peace agreement.

The STC seeks to restore the state of South Yemen, formerly the People’s Democratic Republic of Yemen, the Cold War state which ceased to exist in 1990 when the country unified.

Now in its sixth year, the civil war in Yemen has caused the deaths of over 100,000 people, with the UN estimating that 75 of the country’s population is in dire need of humanitarian aid amid the Saudi-led coalition’s blockade of Houthi-controlled population centers.