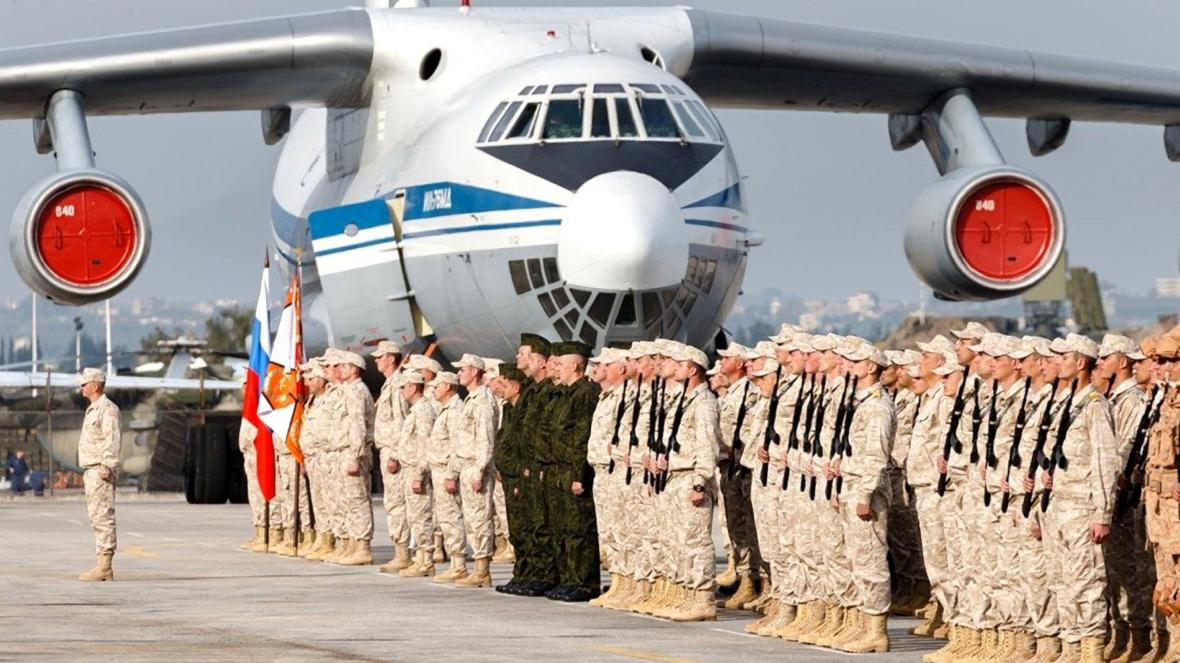 The Russian Reconciliation Center for Syria, also known as the Centre for Reconciliation of Opposing Sides and Refugee Migration Monitoring in the Syrian Arab Republic, was founded on February 23, 2016, and is currently headed by Counter Admiral Oleg Vladimirovich Zhuravlyov.

Russia was requested to enter Syria in late 2015 as international terrorists, such as Jibhat al-Nusra, the Al Qaeda affiliate in Syria, were on the rise and inflicting heavy causalities among the unarmed civilians.

The Center aims to speed the peace negotiations between the Syrian government and the opposition.  The center monitors peace and provides information.

The western media doesn’t write about the Russian Center but instead demonizes the Syrian government and the Russians. The western audience has been convinced by videos that the Syrian government has gassed their people.  Facts are not as important as a chilling video, regardless of the motive of those behind the camera.  Former Defense Secretary, James Mattis, testified that the US did not have any evidence the Assad government had used sarin gas.

The Center is headquartered in Khmeimim Air Base, Latakia, Syria. It is tasked with planning and delivering humanitarian missions and also organizes ceasefire agreements in areas of armed conflict.  One by one, areas of conflict in Syria have been diffused under the work of the center.  Previously, several ceasefires were arranged in which the armed terrorists and their families were allowed to be bussed safely to Idlib. Presently, only Idlib is under the occupation of an armed group, Hayat Tahir al-Sham, which was formerly Jibhat al-Nusra, the Al Qaeda branch in Syria.

The Center for Reconciliation of Conflicting Sides in Syria (CRCSS), is a Russian Ministry of Defense-linked entity and has brokered surrender deals with armed terrorists around Damascus, Homs, and in southern Syria. The CRCSS carried out humanitarian work as well. The CRCSS conducted 735 humanitarian missions in 244 locations around Syria from November 2018 to April 2020.

443 humanitarian missions were focused around Deir Ez Zor City from November 2018 to October 2019, since more than three years of the city being besieged by the Islamic State of Iraq and al-Sham (ISIS) had left the civilians desperate.

A total of 257 missions from November 2018 to April 2019, were concentrated near communities recently liberated from the terrorists by the Syrian Arab Army.

Shuaidila, a village in the Aleppo province had been fending-off repeated attacks by the terrorists. Russian servicemen delivered 250 food packages there on Sunday.

“The population supports the actions of Russia’s Armed Forces. Many people took part in combating illegal armed groups, so it was decided to carry out humanitarian activities in this village,” said Dmitry Zadorin of the Center.

Zadorin explained that residents had to live in demolished houses without water or electricity supply after the terrorists had left the area. Ali Mohammed, a resident, explained the terrorists are still close by, which causes residents, who have left their homes, to be fearful of returning and rebuilding.

“There are 20 villages in our province. Before the war, 45,000 people had lived here, but now there are about 20,000. We want people back, however, the gunmen are too close. And not everyone feels safe here,” he stated.

Residents of the village received humanitarian aid including rice, flour, sugar, tea, and other basic products.

The Center has carried out more than 2,700 humanitarian activities since the beginning of its activities in Syria and has delivered more than 4,700 tons of aid.

Turkey and Iran support vastly different regional agendas but have worked together in Syria alongside their trio partner, Russia.

During a televised video conference between the three, Iran’s Hassan Rouhani pledged his country’s support for the “legal government of Bashar Assad.”

Russian President Vladimir Putin has urged his counterparts in Turkey and Iran to encourage peaceful dialogue between both sides in Syria to end the country’s devastating 9-year war.

Putin said: “An inclusive inter-Syrian dialogue should be actively promoted within the framework of the constitutional committee in Geneva. I propose to support this process, to help the participants to meet and start a direct dialogue.”

Turkey’s Recep Tayyip Erdogan and Rouhani are aligned when it comes to opposing the territorial disintegration of Syria and a larger US role. However, Russia and Iran have been supporters of the Syrian government in Damascus, while Turkey backs the opposition.  Beginning in 2017, the three countries began cooperating to reduce the fighting in Syria as part of a diplomatic process.

Idlib remains in the only area in Syria under the occupation of terrorists, who hold almost two million persons as human shields. Turkey and Russia are present, but so far no progress has been made to free the civilians who are living under Islamic law and suffering human rights abuses.

The various countries involved, including the US, are seemingly wasting time and are not actively trying to solve the conflict.

The Russian Reconciliation Center has reported the terrorists have employed video technicians who have staged filming of fabricated scenes after airstrikes, shelling, and incidents involving chemical weapons.

President Obama gave his famous “Red Line” speech and the terrorists were listening. They saw the threat of military action against the Syrian government as their green light to activate.  They have carried out numerous chemical attacks, which they consistently blame Damascus for.  However, a massive US attack and invasion of Syria never materialized as they had planned for.

Numerous informants are living in Idlib which report back to the Russian’s concerning the plotting of a chemical attack, or a simulation of an attack that would be videoed. In today’s online world, almost everyone believes a video, before examining the facts.

On February 20, a report was made public by the Center concerning terrorists plotting the use of toxic agents in the northeast section of the Idlib de-escalation zone.   Vyacheslav Sytnik, deputy chief of the Russian Center for Reconciliation of the Opposing Parties in Syria, said the plan was to accuse the Syrian authorities of the use of chemical weapons against civilians.  This type of media story in the west gets coverage.

According to Sytnik, the Center has received information that Hayat Tahrir al-Sham terrorists are plotting a provocation with the use of toxic agents.

“Terrorists have delivered by trucks containers with toxic agents, presumably choline, to the settlement of Tarmanin. According to our information, militants plan to simulate a chemical attack entailing casualties among residents to accuse the Syrian government forces of the use of chemical weapons against civilians,” he said.

37 shelling attacks from the positions of the Jabhat al-Nusra terrorists) were reported in the Idlib de-escalation zone.

“The Russian reconciliation center calls on commanders of illegal armed groups to stop armed provocations and embark on a path of peaceful settlement of the situation on territories they control,” he stressed.

The Russian reconciliation center continues to fulfill assigned tasks after the completion of the military campaign in Syria. The center’s officers regularly travel around the country’s liberated areas to assess the humanitarian situation. The main efforts of the Russian military are now focused on assistance to the refugees returning to their homes and evacuation of civilians from de-escalation zones.

“Thirty-two shelling attacks from the positions of the Jabhat al-Nusra terrorist group were registered in the Idlib de-escalation zone in the provinces of Idlib (15 attacks), Latakia (10), Hama (4) and Aleppo (3),” Rear Adm. Sytnik said on February 18.

21 were killed in at least 130 airstrikes carried out by the Russian air force targeting the ISIS group in an area on the edge of the provinces of Aleppo, Hama, and Raqqa.

Russia and Turkey both operate in the northeast of Syria, as does the US and their Kurdish allies, the SDF and YPG. Interspersed among the three foreign countries inside Syria, is the Syrian Arab Army, the only national force. Too many cooks spoil the broth, as the old saying goes. The northeast is crowded with armed groups who at the time are allied, and other times are in opposition.

Only Russia is in Syria legally, with the US and Turkey in occupation and against international law.

Turkey views the US allies, the SDF and YPG as terrorists, allied with the internationally outlawed group, PKK, who have killed thousands in Turkey over three decades. The US-allied with the group to fight against ISIS; however, the Syrian Arab Army and the Russians were already sizable and competent ground forces, and whereas the US forces were invited to Iraq to fight ISIS, they were not invited to Syria and have been a negative factor in the peacemaking process.

Recently, SDF officials said they will consider joining forces with the Syrian Arab Army after a political settlement is reached in Damascus. Russia is concentrating its diplomatic efforts to this end.

“Moscow is trying to return to the idea of a transitional government. The main focus of the negotiations between Turkey and Russia seems to be about the eastern part of Syria. Moscow is likely to approve Ankara’s operations to put pressure on the Kurds again,” said Anton Mardasov.

The political process is moving very slowly in Syria, while the civilians suffer from the US-EU sanctions, made even worse by the COVID-19 pandemic.