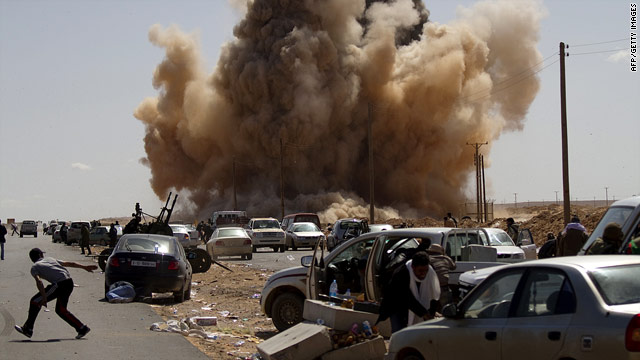 By: Manlio Dinucci, journalist and Researcher

Ten years ago, on March 19, 2011, US/NATO forces began their bombardment of Libya by air and by sea. The war was initiated directly by the United States, first through Africa Command (AFRICOM), and then through NATO under US command. Over the course of seven months, US/NATO airplanes carried out 30,000 missions, including 10,000 strikes involving over 40,000 bombs and missiles. Italy – with the consensus of its multi-party Parliament (with the Democratic Party-Pd in the front row) – played a part in the war, providing seven air bases (Trapani, Gioia del Colle, Sigonella, Decimomannu, Aviano, Amendola and Pantelleria), fighter-bombers Tornado, Eurofighter and other warplanes, and the Garibaldi aircraft carrier and other warships. Even before the air-naval offensive, tribal and Islamist groups hostile to the government had already been financed and armed, and special forces were infiltrated, especially by Qatar, in order to spread armed conflict within the country.

And that’s how an African country which, as documented by the World Bank in 2010, maintained “high levels of economic growth”, where GDP rose 7.5% a year, which demonstrated “high human development indicators” such as universal access to primary and secondary education and a 40% university attendance rate, came to be destroyed.

Taking disparities into account, the average standard of living in Libya was higher than in other African countries. About two million immigrants, mostly African, found work there. The Libyan state, which possessed the largest oil reserves in Africa, in addition to natural gas, ceded limited profit margins to foreign companies.

Thanks to energy exports, the Libyan balance of trade was in the black to the tune of $27 billion USD per year.

It’s no coincidence that the NATO war to destroy the Libyan state was initiated barely two months after the rise of the African Union, which, on January 31, 2011, led to the creation that year of the African Monetary Fund. This is proven by emails written by the Obama Administration’s Secretary of State, Hillary Clinton, later released by WikiLeaks, showing how the United States and France wanted to eliminate Qaddafi before he used Libya’s gold reserves to create a pan-African currency as a an alternative to the dollar and the CFA franc, the currency France imposed on 14 former colonies.

It’s also proven by the fact that the banks were released even before the bombers in 2011, ceasing $150 million USD of Libya’s foreign investments, most of which have disappeared. Goldman Sachs, the most powerful investment bank in the United States, whose vice president was Mario Draghi, played a leading role in the looting.

In Libya today, energy export revenues are hoarded by power groups and multinationals amidst the chaos of armed conflicts. The standard of living for most of the population has been decimated. African immigrants, accused of being “Qaddafi’s mercenaries,” have been imprisoned in zoo cages, tortured and killed. Libya has become the main transit route for human traffickers in a chaotic wave of migration towards Europe that has taken the lives of more victims that the 2011 war. In Tawergha, the NATO-supported Islamist militias of Misurata, who assassinated Qaddafi in October 2011, have truly carried out an ethnic cleansing, forcing around 50,000 Libyan citizens to flee with no hope of returning.

Also responsible for all of this is the Italian parliament, which on March 18, 2011 committed the Italian government to “adopt any and all initiatives (including the entrance of Italy into the war against Libya) to ensure the protection of the region’s populations.

Manlio Dinucci is a Research Associate of the Centre for Research on Globalization.