Home Politics Middle East US, ‘promoter of peace’, drops an average of 46 bombs a day 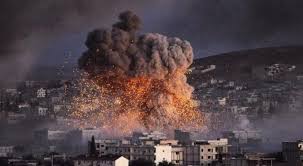 The Pentagon has published its first Airpower Summary since US President Joe Biden took office about a year ago.

According to a commentary article by Medea Benjamin and Nicolas Davies published in the Salon, the Airpower Summary is a report that has been published since 2007, which documents the number of bombs and missiles dropped by the US forces in Afghanistan, Iraq, Syria, Yemen, and other countries since 2004.

Former US President Donald Trump stopped publishing the documenting report after February 2020, covering up on the 3,246 bombs and missiles on Afghanistan, Iraq, Syria, Yemen, and other countries (2,068 under Trump and 1,178 under Biden), the writers noted.

The document reveals that over the past 20 years, the US and its allies have dropped more than 337,000 bombs and missiles — “an average of 46 strikes per day for 20 years,” the writers estimated.

Benjamin and Davies accused the US government of “keeping the American public in the dark about the horrific consequences of these long-term campaigns of mass destruction.”

This allowed the public to “maintain the illusion of US militarism as a force for good in the world in their domestic political rhetoric,” they added.

“There has been no accountability for these 20 years of senseless destruction. Even with the publication of Airpower Summaries, the ugly reality of US bombing wars and the mass casualties they inflict remain largely hidden from the American people,” the writers underlined.