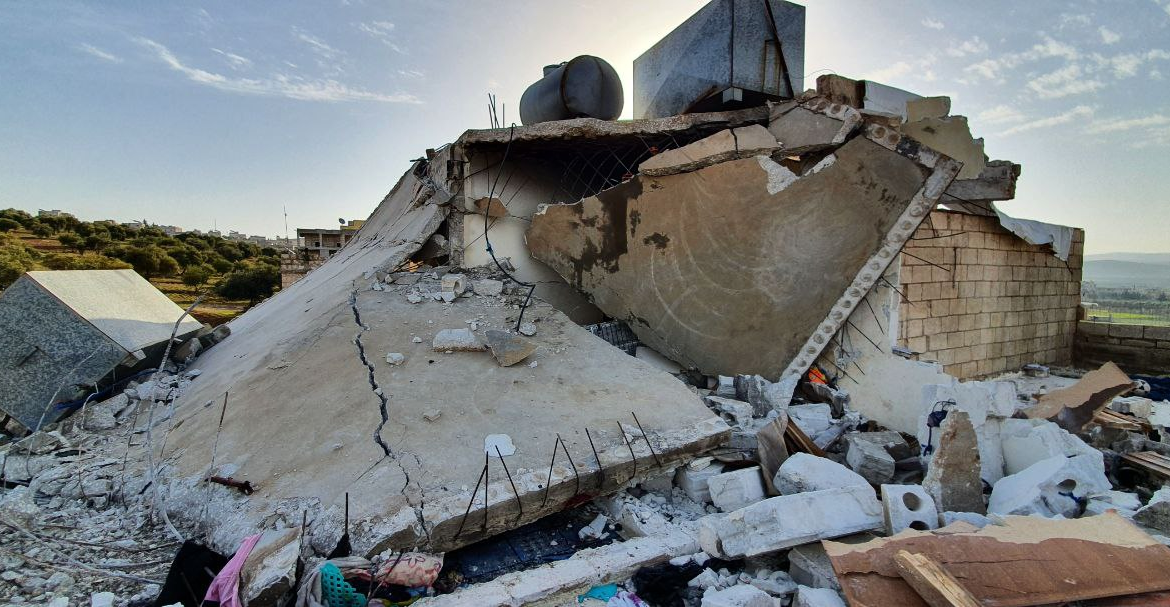 Biden’s strike in Idlib proves it is an ISIS headquarters

President Biden said that the operation to kill Abu Ibrahim al-Hashimi al-Qurayshi in Idlib “took a major terrorist leader off the battlefield.” He added, “Operating on my orders, the United States’ military forces successfully removed a major terrorist threat to the world, the global leader of ISIS, known as Hajji Abdullah. This operation is testament to America’s reach and capability to take out terrorist threats no matter where they try to hide anywhere in the world,” he said.

Idlib wasn’t much of a hiding place, as it is the most obvious place on earth for ISIS commanders, followers, and their Al Qaeda brothers in arms. Intelligence found that al-Qurayshi was living in Atmeh, Idlib province, within walking distance of Turkey, and identified his house and his neighbors.  He had succeeded al-Baghdadi as the head of ISIS; however, not much is known about him or his inner circle, but he had ordered a series of atrocities, including against the Yazidi people.

“U.S. Special Operations forces under the control of US Central Command conducted a counter-terrorism mission this evening in northwest Syria,” Pentagon Press Secretary John Kirby said in a news conference on Thursday afternoon. “To the degree, there’s loss of innocent lives, it’s caused by Abdullah and his lieutenants,” he said.

No sooner had the statement by Biden and Kirby hit the airwaves, reports coming in from the US-backed “White Helmets” and the UN said six children and four women were among 13 people killed as a result of the US special ops raid. The Whitehouse and Pentagon attributed the civilian loss of life to the terrorist killed, as he had detonated a suicide bomb during the raid.  However, witnesses and activist groups did not agree with the sanitized version.

In December, an investigation by the New York Times based on confidential Pentagon documents, that US air wars in the Middle East have been marked by “deeply flawed intelligence” and “faulty targeting” that has resulted in the deaths of more than 1,000 civilians over the last decade.

Idlib is identified by western media as “the last rebel stronghold in Syria”.  In reality, it is a conclave of armed militias who are all following Radical Islam, which is not a religion, or a sect, but a political ideology.  Whether it is the Muslim Brotherhood, Al Qaeda, or ISIS they all share the same goal: to remove governments and establish an Islamic State globally.

“Idlib is essentially the largest collection of Al Qaeda affiliates in the world right now,” Michael Mulroy, Deputy Assistant Secretary of Defense for the Middle East, said at the Center for a New American Security in Washington.  US officials also have voiced concerns about the presence of tens of thousands of foreign terrorists in Idlib, but no US policy was ever formed to address the issue.  The US policy was to protect Idlib from attack by either Russia or the Syrian government in Damascus and allow Turkey, a US ally and NATO member to continue supporting and protecting the terrorists there.

Whenever there were Russian or Syrian airstrikes on Idlib, the western allies of the US would call for a UN security council meeting to condemn any action against Al Qaeda or ISIS in Idlib.  However, there have been several cases in which the US made attacks on Idlib, in a display of double standards.

Idlib province is mostly controlled by Hayat Tahrir al-Sham, who used to be called Jibhat al-Nusra, who was designated a terrorist group by the US and the UN. With a name change, the US was able to justify continued support of the bloodthirsty terrorist who is well known for beheading, rape, kidnapping, and murder.

The civilian population is about 2 million and they are kept as human shields.  They are not welcome in Turkey, and they live in tents without warm clothes and heating.  Recently, Syria and Lebanon have been hit with unusual amounts of rain and snow. Two babies have died from the cold after heavy snow and freezing temperatures hit camps in Idlib. A UN official reported that the seven-day-old and two-month-old girls had died there.

The UN has warned that the situation is getting worse due to a severe economic downturn in Syria that has seen food prices double in a year, as well as a shortage of funding to provide winter aid and increased needs.

Save the Children’s Syria response director, Sonia Khush said it was “incomprehensible that any child should face the winter scared for their life”. “Almost 11 years after the crisis in Syria started, it feels like the world has forgotten about children in northwest Syria,” she added.

The US killed Baghdadi in Idlib

The former leader of ISIS, Abu Bakr al-Baghdadi, was also killed in Idlib by an American special ops raid in October 2019, similar to the recent raid.  He also detonated a suicide vest when cornered.  The two operations were similar: the same place, helicopters used, and the suicide vest.

One key common component shared by both raids is the location directly on the Turkish border.  Whether it was the US-sponsored Free Syrian Army, Al Qaeda, or ISIS the key component in the puzzle is Turkey.  President Erdogan of Turkey heads a party which is Muslim Brotherhood supporters. During the Trump administration, the Whitehouse made it clear that Turkey was more involved with helping terrorists in Syria, than fighting ISIS.  In 2017, Trump had pulled the plug on the CIA program headquartered in Turkey, “Timber Sycamore”, which trained and supported armed terrorists in Syria, in hopes of ‘regime change’.

Sadradeen Kinno, a Syrian researcher who closely follows Islamic militant groups in Syria, told VOA that following the defeat of ISIS in its last pocket of control in eastern Syria in March 2019, a significant number of its fighters fled to Idlib.

“ISIS and Al Qaeda affiliated groups in Syria disagree ideologically, but now they face a common existential threat from the U.S. and Russia. So I believe al-Baghdadi ended up in Idlib by striking a deal with Huras al-Din and other groups that are active there,” he said.

The Syrian Civil Defense is a group purporting to be rescuers in areas under the occupation of terrorist groups, such as Idlib.  The group stole the name from the real group of the same name, which is a working fire department and paramedics group in locations across Syria.  While Biden and Kirby were explaining the attack in Idlib, the “White Helmets” were issuing details on the ground, that at least 13 people were killed, including four women. Our teams rushed an injured child to the hospital. The child’s entire family was killed in the operation. The teams also rushed another person to the hospital who was injured in the clashes when he approached the scene to witness what was happening.”

The White Helmets won the Alternative Nobel Prize in 2016, and a Netflix documentary about the group won an Oscar in 2017. They have been accused of working with Al Qaeda and ISIS, and of having staged videos of rescues.

Videos and photos online show that the “White Helmets” have supported terrorists and ISIS, and in one case they are seen removing the dead bodies after a terrorist massacre. It would be difficult to work alongside, and in a supporting role, with armed terrorists in Syria without having formed a personal affiliation with the fighters.

“There’s no way to deny it,” says Nur (not his real name) who helps manage the White Helmets’ media online. “Former volunteers were in pictures waving flags.” This is about the black ISIS flag. Some men joined the “White Helmets” having left terrorist groups, he says.

“The White Helmets cannot be considered a humanitarian organization when they are embedded with a designated terrorist organization al-Qaeda, and of course, ISIS and various other armed groups… They do not behave in any way like a humanitarian organization inside Syria, and therefore… they are a legitimate target in a war situation,” Vanessa Beeley said in an interview in2020. The British activist has become the foremost expert on the “White Helmets” after spending almost 10 years in Syria during the conflict.

James Le Mesurier, a former British officer once honored by the queen, married Emma Winberg, a former diplomat, and fellow activist. They were married in Istanbul, Turkey where Mayday was headquartered. However, he committed suicide thereafter it was revealed he had used the humanitarian group’s money inappropriately.

Le Mesurier founded Mayday in 2014 after having spent some time organizing aid and arranging initial training sessions for Syrian emergency responders in Turkey.  Between 2014 and 2019, Western governments would provide around 120 million euros in support to Mayday, about 20 million of it coming from Germany. Mayday has since been dissolved, though the White Helmets are continuing their operations in Idlib with backing from the US and Europeans.

The Russian-Turkish deal on Idlib

Idlib has been a divisive point between Russia and Turkey, who share energy interests. Russia back the central government in Damascus, which Turkey backs the terrorists.  In September 2018, Moscow and Ankara reached an agreement that postponed a planned Syrian offensive on Idlib and other areas near the Turkish border. As part of that agreement, Turkey was required to remove all extremist groups from the province, some of which are allied with Al Qaeda.

3 and one-half years later, Turkey has failed to implement its commitment with Russia, leaving most of Idlib under the control of Al Qaeda, and some pockets of ISIS. Turkey has maintained several military outposts while illegally occupying sections of Syria, and Russia has chosen not to open an armed conflict with the NATO member.