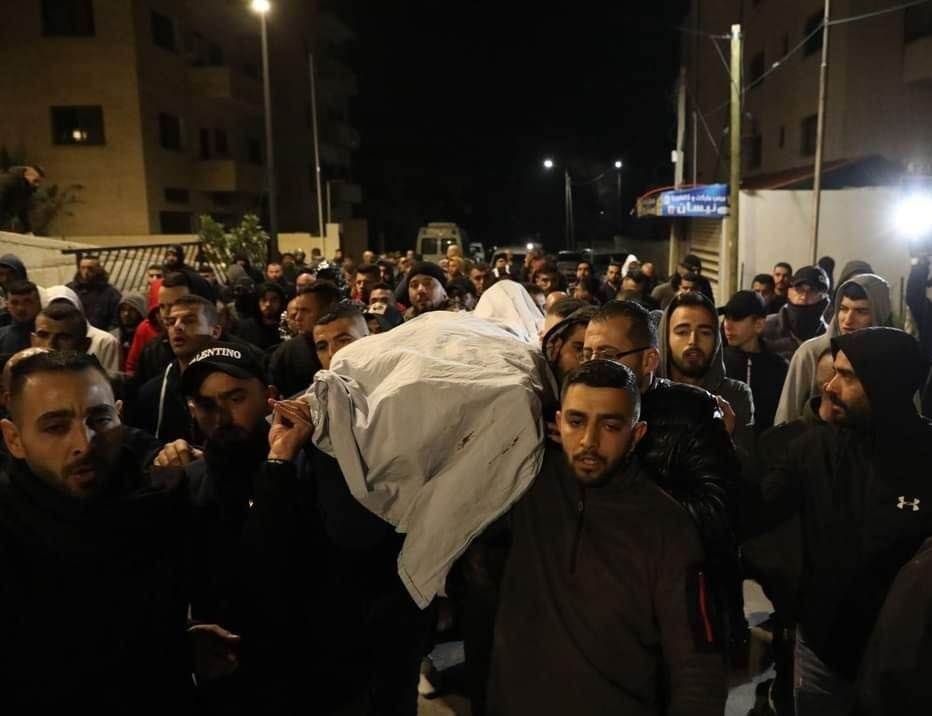 Jenin mourns the Palestinian youth Mohammad Akram Abu Salah, who was shot dead by the Israeli occupation forces in a massive march against the occupation’s arbitrary measures.

A Palestinian teen was killed and ten others were wounded, at dawn today, Monday, by the Israeli occupation forces’ bullets as they stormed  Silat Al-Harithiya town, west of Jenin, accompanied by dozens of military vehicles with the aim of demolishing houses. The Israeli forces opened fire on Palestinian citizens who gathered to confront them defending their town.

Hundreds of people took part in the funeral procession of the Palestinian martyr Mohammad Akram Abu Salah, 17, in Jenin, during which the participants affirmed that they will continue to defend their hometown against the oppression of the Israeli occupation.

Confrontations broke out between dozens of young Palestinians and the occupation forces, who fired massive sound bombs and tear gas, causing a number of civilians to suffocate.

In its turn, the Red Crescent confirmed that its crews dealt with 3 serious injuries, one of which was in the head and in a very critical condition.

The director of the emergency care in Jenin, Mahmoud Al-Saadi, said the occupation forces even prevented ambulances from entering the town to treat and transport the injured.

IOF blow up the house of prisoner Mahmoud Jaradat in Jenin

The occupation forces blew up the house of prisoner Mahmoud Jaradat in the town, and two Israeli occupation soldiers were injured as the walls they themselves demolished fell on them during the demolition process.

The daughter of prisoner Jradat, Mayar, said in a message after the demolition of her house that this will not affect the resolve to confront the occupation, adding: “We will not kneel, and whenever they demolish [our houses], we will build them again.”

Hamas Spokesperson Hazem Qassem commented on the demolition of Jaradat’s home, describing it as “a racist crime, terrorist behavior, and flagrant violation of all humanitarian laws.”

Qassem explained in a tweet that “the repetition of this crime confirms the impotence of the occupation in the face of our people’s rising resistance in the West Bank,” noting that “all experiences have proven the catastrophic failure of this policy, and our people’s ability to sacrifice will not be broken by these crimes.”

For its part, the Ahrar Movement declared that “the occupation’s demolition of citizens’ homes is a failed policy that reflects its inability to undermine the will of our people and its revolutionaries who are rising up with their heroic operations to curb the aggression of the occupation.”

In response to the targeting of civilians in the town, the Jenin Brigade announced that it had managed to target and directly hit a concentration of Israeli occupation soldiers in an operation it called “The Mighty Jenin.”

Our correspondent from Sheikh Jarrah Neighborhood added that “the occupation forces are firing stun grenades at those standing in solidarity with the Salem family,” stressing that they are “trying to isolate the home of the Salem family, which is threatened with forced expulsion.”

She also pointed out that the occupation forces “set up iron barriers to isolate the home of the Salem family,” noting that “they prevent journalists from moving freely in that area.”

The Palestinian Resistance factions all mourned the Palestinian martyr Abu Salah and affirmed that the Palestinian people will continue to confront the Israeli occupation forces against the demolition of homes, expulsions, and killings.

PFLP: The massive uprising of our prisoners constitutes a shield for the Resistance

The Popular Front for the Liberation of Palestine considered that the escalation of the resistance of the Palestinian people throughout the West Bank and occupied Al-Quds and the response of the populace only “reflects once again that our people enjoy such huge resistance and steadfastness that no force can defeat or derail from the ability to withstand and heroically confront the Zionist aggression.”

On their part, the Resistance committees affirmed that “the blood of the martyrs will remain the usher of all the free people that leads them toward the liberation of occupied Al-Quds and Al-Aqsa Mosque.”

The Committees said that “the policy of demolishing homes is a racist fascist policy that expresses a vengeful, vindictive occupation mentality that will never succeed in breaking the will of our resistance and will constitute a motive and fuel for enflaming the resistance until the end of the usurper occupation.”

Islamic Jihad Movement: The blood of Martyr Mohammad Abu Salah will illuminate the path of the freedom fighters

For its part, the Islamic Jihad Movement said that “the escalating crimes of the occupation against our people and the rise of the heroic martyr right when the occupation forces demolished the house of the captive leader Mahmoud Ragheb Jaradat demonstrates the extent of Zionist terrorism.”

The Movement also stressed that the Palestinian people “will continue to confront the occupation forces,” maintaining that the acts of killing and destruction of the occupation in every part of our land will not affect the will and determination of our people and our resistance.

Hamas: The losses inflicted on the Israeli occupation in the battle of Seif Al-Quds could be repeated twofold

Hamas Political Bureau member, Harun Nasser Al-Din confirmed that the Movement’s leadership sent messages to mediators about the latest situation in occupied Al-Quds and Sheikh Jarrah and informed them that what the Israeli occupation is doing is playing with fire.

Nasser Al-Din also said that the losses inflicted on the Israeli occupation in the battle of Seif Al-Quds could be repeated twofold if these attacks continued, indicating that the settlers’ setting up a tent in Sheikh Jarrah and storming the land of the Salem family is a trigger to the outbreak of confrontations that will continue endlessly unless our rights are restored.