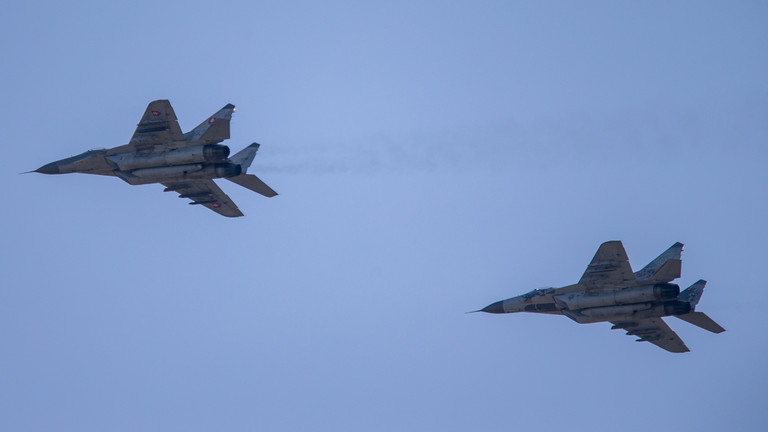 Bulgaria, Poland, and Slovakia are said to be delivering 70+ airplanes for the Ukrainian military

Three NATO countries will deliver more than 70 warplanes for the use of Ukraine, military representatives in Kiev announced on Tuesday morning.

According to a statement published on Facebook, Poland, Bulgaria, and Slovakia will provide over 70 Soviet-era MiG-29 and SU-25 aircraft that can be based at Polish airfields.

Sixteen MiG-29 fighters and 14 SU-25s will be provided by Bulgaria. Poland will send 28 MiG-29 warplanes, and Slovakia can deliver 12 MiG-29 jets, the officials stated.

“Our partners gave us MiG-29 and SU-25! If needed, they can be based on Polish airfields from which Ukrainian pilots can carry out combat missions,” the statement read, also suggesting that there will be more “Ghosts of Kiev” soon.

The ‘Ghost of Kiev’ became a media legend following reports that a Ukrainian pilot “managed to single-handedly take down 6 Russian fighter jets.” However, the footage showing the ‘Ghost’ was soon revealed to be a clip from the computer game ‘Digital Combat Simulator’.

Russia invaded Ukraine last Thursday, stating it was necessary to “demilitarize” the country to protect the Donetsk and Lugansk People’s Republics, and Moscow’s own security interests. The majority of Western countries condemned the attack and imposed tough sanctions on Russian officials, and the country at large.