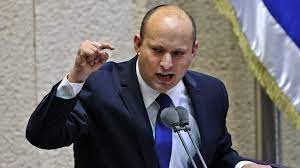 Hassan Sayad Khodai, a member of the Islamic Revolutionary Guard Corps (IRGC), was killed on a street of Tehran earlier this month in a brazen attack in the middle of the day. Tehran claims Israel was behind his death, while Tel Aviv declined to comment on the allegation.

Israeli Prime Minister Naftali Bennett has declared that Iran’s “immunity”, which it allegedly enjoyed, was “over” as he addressed his Cabinet.

“For decades, the Iranian regime has practised terrorism against Israel and the region by means of proxies, emissaries, but the head of the octopus, Iran itself, has enjoyed immunity.”

Bennett claimed that from now on Tehran will be punished for allegedly carrying out attacks against the Israeli state using its proxies. He further vowed that those who finance “terrorists” and send them to hit Israel, would “pay the full price“.

The prime minister did not elaborate on how Tel Aviv plans to act against Iran over its alleged actions. However, his statement comes in the wake of the daring assassination of a member of the Islamic Revolutionary Guard Corps (IRGC), Hassan Sayad Khodai.

Khodai, whom Israel accused of being involved in plotting the attacks against the country and its citizens, was shot dead in the middle of the day in Tehran by two assailants on motorcycles. The Islamic Republic accused Tel Aviv of plotting the assassination, while Iranian state media reported that members of an Israeli intelligence service were uncovered and arrested by the IRGC following Khodai’s killing.

Israel declined to comment on Tehran’s accusations, as Iran vowed to retaliate for the death of the IRGC member.