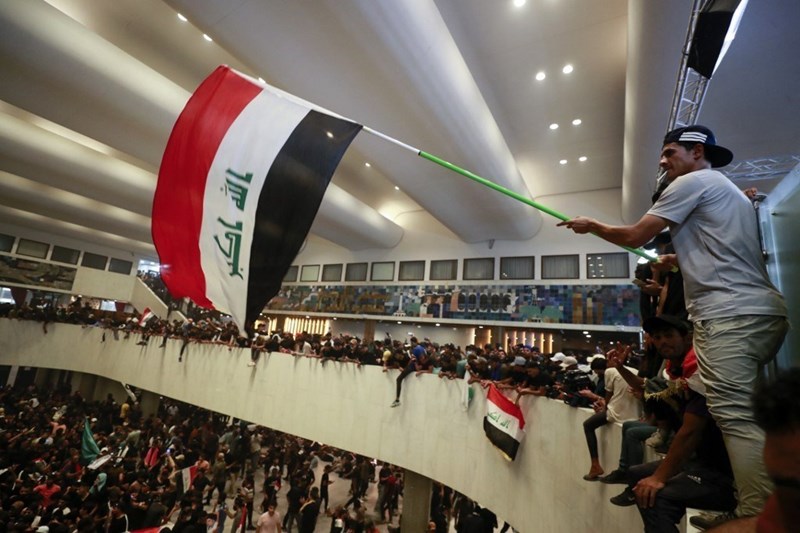 The Sadrist Movement is coordinating and organizing the entry of demonstrators into the Green Zone in Baghdad, Iraq, as well as Parliament.

Demonstrators are still storming parliament for the second time this week to protest the Coordination Framework’s nomination for Prime Minister.

The demonstrators also renewed their rejection of the proposed PM Mohammad Shiya Al-Sudani, who was nominated for this position by the Coordination Framework.

On Wednesday, thousands of Sadrist supporters stormed the parliament, denouncing the candidacy of the 52-year-old former minister and governor.

They once again on Saturday renewed their rejection of proposed candidate Mohammad Shiya Al-Sudani, who was nominated for the premiership on Monday.

A few days ago, the Secretariat of the Coordination Framework in Iraq announced the nomination of Mohammad Al-Shiya Al-Sudani to take over the government.

Muqtada Al-Sadr’s parliamentary bloc emerged from the October elections as the biggest in Parliament. However, it still did not hold a majority.

The bloc submitted its resignation on June 12, in a move that Muqtada Al-Sadr considered “a sacrifice for the sake of the country and the people to rid them of an unknown fate.”

Demonstrators waved Iraqi flags and pictures of the cleric inside the legislature, footage from Al Mayadeen showed earlier. They managed to enter after thousands amassed at the end of a bridge leading to the Green Zone before dozens tore down concrete barriers protecting the zone and ran inside.

Security forces had fired tear gas near an entrance to the district, home to foreign embassies and other government buildings as well as parliament.

The previous demonstrations saw the protestors occupying the parliament building, singing, dancing, and taking selfies before leaving two hours later at the orders of Al-Sadr.

Prime Minister Mustafa Al-Kadhimi called on the demonstrators to remain peaceful while ordering the security forces to provide them with protection.