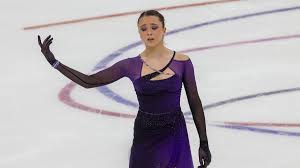 The Russian Olympic Committee (ROC) has pledged to defend the interests of its figure skaters after the World Anti-Doping Agency (WADA) increased its pressure in the case involving teenage star Kamila Valieva.

The Court of Arbitration for Sport (CAS) confirmed this week that it had registered an appeal from WADA against the Russian Anti-Doping Agency (RUSADA) and its handling of the investigation into Valieva’s positive test for the banned heart medication trimetazidine.

WADA is seeking a four-year ban for Valieva and the annulment of her results from December 25, 2021 – the date when her positive sample was collected.

That would mean that Valieva and the ROC would be stripped of the gold medal they won in the figure skating team event at the Beijing Winter Olympics in February.

“At the moment we have a WADA appeal against RUSADA’s decision, there is nothing to comment on this from a legal point of view,” said ROC president Stanislav Pozdnyakov in comments shared by the TASS news agency on Tuesday.

“There will be trial, certain decisions will be made. If these decisions call into question the results of our skaters in Beijing, then we will certainly be active participants in the process.”

WADA has accused Russian anti-doping officials of stalling in their investigation into the circumstances surrounding Valieva’s positive probe, which was collected during the Russian championships.

RUSADA general director Veronika Loginova suggested that a disciplinary hearing would be held in October, but the organization later announced that any decision would remain confidential due to Valieva’s status as a “protected person.”

Valieva was aged 15 when the news of her positive test emerged at the Beijing Winter Olympics in February, after she had already won gold in the figure skating team event.

Valieva was cleared by an emergency CAS panel in Beijing to compete in the individual event, but finished a disappointing fourth despite being the strong favorite for gold.

Should Valieva be banned, she and her teammates would face being stripped of the gold medal they won in the team event in Beijing.

The American team which finished second would be elevated to first place, with Japan taking silver and Canada rising to bronze.

Valieva’s team have vehemently maintained her innocence, arguing that contamination from heart medication her grandfather was taking may have been behind the positive test result.

Russian Olympic officials have also argued that the skater passed numerous other doping tests, while questions have been asked surrounding the delay in reporting the positive result by the WADA-accredited laboratory in Stockholm.

The CAS proceedings are expected to take several months to play out, if not longer.

A three-member panel of arbiters will issue a final decision, with one member nominated by WADA, another by RUSADA and Valieva jointly, and the final panel member being appointed by the head of the CAS Appeals Division.