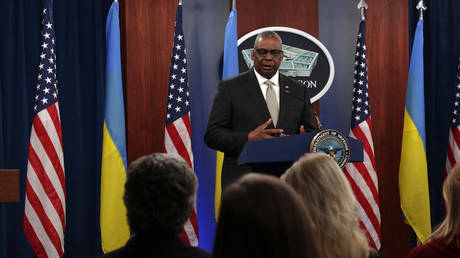 US Defense Secretary Lloyd Austin has lauded Russia’s armed forces and weaponry on Saturday – but added, however, that such military might has not enabled Moscow to achieve victory in the Ukraine conflict.

“You know, the Russians have a massive military and impressive weapons,” but this “hasn’t helped them prevail in a campaign of conquest and cruelty,” Austin claimed, speaking at the Halifax International Security Forum in Canada on Saturday.

According to the official, “it’s about the cause,” as well as “those who fight for it.”

The secretary of defense went on to praise President Joe Biden for rallying “nations of goodwill” against Russia’s attempts to “redraw borders by force.”

Austin also said the US will stand by Ukraine as long as the conflict lasts, insisting that the outcome will “determine the course of global security in this young century.”

He added, however, that NATO will not be dragged into what he described as the “worst crisis in [European] security since the end of the Second World War,” unless Moscow attacks one of its member states.

The defense secretary claimed that the military alliance is defensive in nature, while noting that Washington has brought the number of US troops stationed in Europe to more than 100,000.

Some of these forces have been deployed to Poland, representing the “first permanent US forces on NATO’s Eastern Flank,” Austin noted.

He concluded by saying that the “basic principles of democracy are under siege around the world,” and it was “US leadership” that helped shape the post-World War II rules-based international order, and Washington’s role remains “vital to sustain it.”

A number of senior Russian officials, including the former president and current deputy head of the nation’s Security Council, Dmitry Medvedev, have claimed in recent months that Russian forces in Ukraine are being confronted not only by Kiev’s military, but also the whole of “NATO and the Western world.”

Moscow has repeatedly argued that the West is only prolonging the conflict by providing Ukraine with weapons.

Before hostilities broke out in the eastern European country in late February, Russia presented NATO with a number of proposals intended to define a new European security architecture. The Western military alliance, however, rejected the measures out of hand.