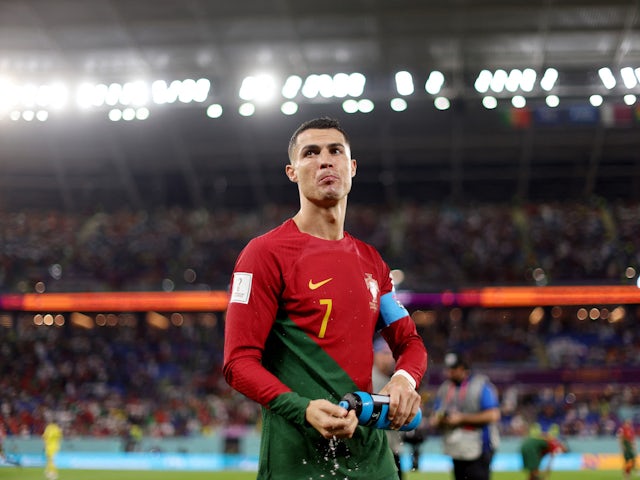 Cristiano Ronaldo carved out another piece of history for himself when he opened the scoring in Portugal’s 3-2 Group H win against Ghana at the FIFA World Cup in Qatar. The former Manchester United star scored the 118th goal of a remarkable career in international football with a second-half penalty to break the deadlock, and Ghanian hearts, just after the hour mark. Already the top goalscorer in international football history, Ronaldo’s successful spot kick meant that he became the first male player to score at five different World Cups, and also the second-oldest goalscorer in World Cup finals.

The 37-year-old star, who has endured a strange few weeks after conducting an interview with UK television host Piers Morgan which ultimately culminated this week in his parting ways with Manchester United, missed two opportunities in what was a pedestrian first 45 minutes from both sides.

The game exploded into life, however, just after the hour mark when Ronaldo was dragged down in the box by Mohammed Salisu and he duly dispatched the penalty past Lawrence Ati-Zigi. What followed was perhaps the most dramatic 35 minutes (including the extensive injury time) of the World Cup so far. Just seven minutes later Ghana skipper Andre Ayew took advantage of some calamitous defending to level the scores at one apiece, before Joao Felix restored Portugal’s advantage two minutes later.Milan star Rafael Leao looked to have killed off the game two minutes after that, picking a vital moment to score his first-ever goal for Portugal.But the drama was far from over.As the clock continued to tick, Ghanaian substitute Osman Bukari was the beneficiary of more terrible defending from Portugal as he nodded home at the far post – and remarkably performed Ronaldo’s trademark celebration immediately afterwards as the clock entered stoppage time – to make the score 3-2.

The nine minutes injury time signalled by the referee’s assistant gave Ghana the platform for what would have been an unlikely equalizer on the balance of play – and they nearly found one in the dying seconds after Portugal goalkeeper Meireles da Costa came close to handing Ghana a point.Da Costa, killing time before he cleared a ball upfield, failed to notice Ghana’s Inaki Williams loitering behind him as he placed the ball on the turk before attempting to kick upfield, with only an unfortunate slip from the Athletic Bilbao man denying him an opportunity to roll the ball into an empty net in the 100th minute of the match.

In the end, though, the script had been written for Cristiano Ronaldo to be the difference – and the striker duly delivered, just as he has done in the previous four World Cups.