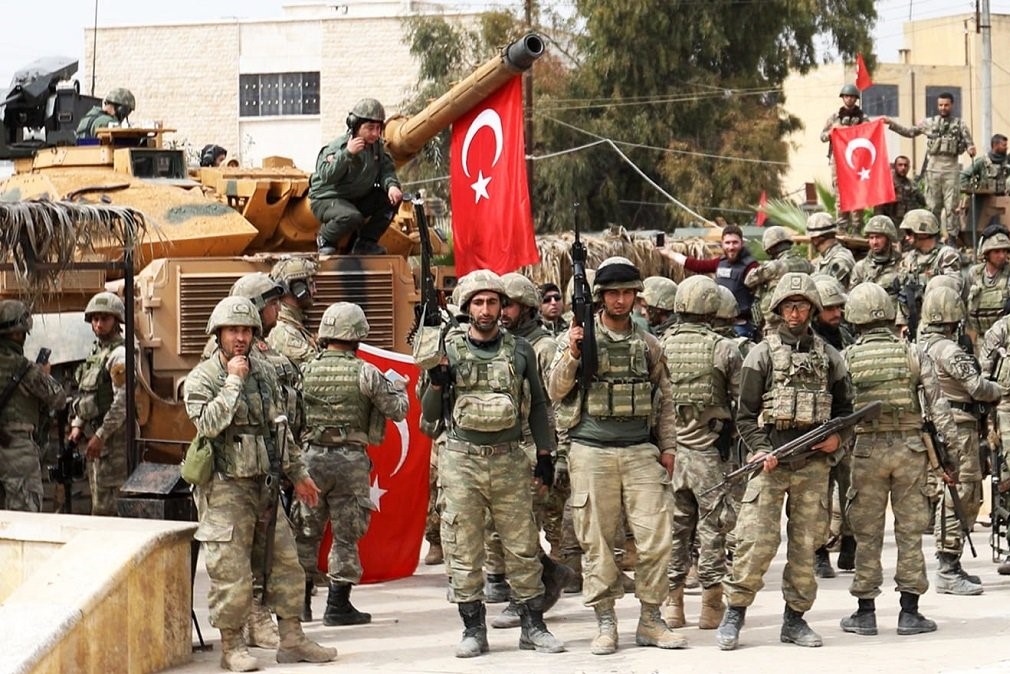 The Kurds in northeastern Syria have established their semi-autonomous administration which they call “Rojava”. They are now under threat of an increased invasion and occupation by Turkish ground troops, which could end in ethnic cleansing and mass casualties.

Turkish President Erdogan has demanded for years that the US must stop supporting the Syrian Defense Forces (SDF) and their armed wing the Peoples Protection Units (YPG) which serve as the army of “Rojava”.

Although Turkey and the US are partners in NATO, and long-term allies, with a US military base in Turkey, the two sides have diverged sharply over the issue of the Kurds establishing an administration independent of Damascus in northeast Syria.

The Turkish view the YPG as an offshoot of the PKK, which is an internationally outlawed terrorist group, responsible for about 40,000 deaths in Turkey over three decades.  Yet, the US partnered with the SDF and YPG in their joint attack to eradicate ISIS from Syria.

The Kurds have never been the majority of the population in northeastern Syria; however, they have a very sizeable community there, and in recent years they have carried out ethnic cleansing in the region with Syrian Arabs and Syrian Christian populations having been displaced.

The administration of “Rojava” is carried out by officials, such as Ilham Ahmed and General Mazloom Kobane, who follow the communist political ideology of the founder of the PKK, Abdullah Ocalan.  Despite the American hatred of communism, the 30 years of US combat in Vietnam to eradicate communism there, and the current US antagonism with communist China, Washington, and the Pentagon put their hands firmly with the communist leadership of “Rojava”.

Syria is 10,000 years old and is home to multiple religions, and ethnicities. The Kurds are only one of many ethnicities, and before the outbreak of the conflict in Syria in 2011, the Kurds were full Syrian citizens with legal rights under the secular and socialist government in Damascus.  The current narrative, used to defend their separatist aims, is that the Kurds were oppressed by the Damascus central government.

The US-NATO attack on Syria for ‘regime change’ beginning in 2011 presented an opportunity for the Kurds to use the chaos and destruction carried out by the terrorists following Radical Islam, to establish an Islamic government in Damascus.  The terrorists attacking Syria were funded by oil-rich Arab Gulf countries, but the weapons, training, and logistics were supported by Washington through offices of the CIA in Turkey, which were finally shut down in 2017 by President Trump.  With the US military and intelligence services already on the ground in Syria, the Kurds presented themselves as a military partner and fulfilled the long-term goal of the US to split Syria into smaller units, following the age-old military rule of “divide and conquer”.   Idlib was divided from Damascus by the Al Qaeda branch in Syria, Jibhat al-Nusra, now branded as Hayat Tahrir al-Sham (HTS).  HTS is supported by Turkey and the UN and other charities feed the terrorists, their families, and other civilians living there.  The northeastern region was divided from Damascus by the Kurdish administration of “Rojava”, which is supported by the US.

The US partnered with the Kurds in ‘Rojava’, but never promised them support in their ultimate goal of a homeland for the Kurds.  The US has consistently told the Kurds they need to seek to repair their relationship with Damascus to protect themselves from the threat of extermination at the hands of the Turkish government, and the HTS which are mercenaries for Turkey in Syria.  The US has not had any plan to solve the suffering of the Syrian people and allow them to repair homes and lives. Instead, over the past years, the US has supported a status quo in Syria with the US, Turkey, Russia, and Iran all acting in various regions, but without a unified plan for recovery from a decade of war.  The current US policy is to keep US-EU sanctions in place which prevent Syrian civilians from recovering.

Syria was self-sufficient in oil resources and wheat production. The Kurds in ‘Rojava’ stopped that by seizing control militarily and occupying those areas in cooperation with the US military occupation forces. Now, the main oil field of Al Omar and Conoco are producing oil which is shipped in tankers by the US Army to Iraq and processed in Erbil, in the Kurdistan Region (KRI), an autonomous region in Iraq comprising the four Kurdish-majority governorates.

The Baghdad government of Iraq has asked the US military to leave, but the US refused to end their occupation of Iraq and Syria.  The US is directly connected to the Kurds in both countries. In Syria, the US objective is to prevent the Damascus government from benefitting from its oil resources, which has kept the Syrian people without electricity, home heating fuel, and gasoline. Some homes are without electricity, and others across Syria receive from one to four hours per day.

The largest wheat fields in Syria are under the occupation of the Kurds and the wheat is used for local consumption in “Rojava” and the rest is sold to the European Union or other buyers.  Damascus has said it is running low on wheat supplies and cannot import. During the conflict years, the terrorists stole huge wheat supplies in Syria. They trucked them to Turkey, where Erdogan’s government re-sold the stolen wheat to the EU to produce French croissants and Italian pasta.

With the suffering of the civilians in Iraq and Syria, it is no wonder the people hold intense hatred towards the US.  This hatred of Washington is not considered by the White House and Capitol Hill as American lawmakers are insulated in the hubris of a super-power, with no thought of generations to come, or the crumbling demise of the American Empire.

The world is watching violence and deaths in Iran in what appears to be an increasingly popular uprising against the Islamic government.  The young woman who died was Kurdish and her death has sparked unrest in the western Kurdish region of Iran, which shares a border with the Kurdish region in Iraq, which in turn shares its border with “Rojava” in Syria.  Looking at a map, we can see a straight line through northeast Syria, to northern Iraq and culminating in the west of Iran.  The Kurds in Iran now have weapons, which were smuggled into Iran from the Kurds in Iraq, and the US military partners in “Rojava” in Syria.  The increasing armed uprising in Iran will need more weapons and they will be supported by the US which has long sought a ‘regime change’ in Iran.

Israel has offices in Erbil and has conducted business openly with the Kurdish administration there. The Israeli offices there have come under attack presumably by Iranian forces. Iran has long been viewed by Israel as a prime threat. The recent change of government in Israel to an extremist right-wing alliance may produce increasing support for weapons smuggled from Erbil to Iran to fuel the revolution.

Turkey and Syria have a common enemy, the Kurds.  Both countries are opposed to Kurdish independence, and both want to see the US break their alliance with the Kurds in Syria. With the new opportunity for ‘regime change’ in Iran, both Israel and their ally the US will want to stay on the ground to support the transfer of weapons into Iran through Iraq.  Turkey may invade northeast Syria massively to upset the US-imposed status quo. Turkey may find old friends in Damascus to shore up their southern flank once the bombs start falling.  The negotiations to save the Kurds in “Rojava” may see General Mazloom Abdi in Damascus asking for salvation at the same table as Turkey.