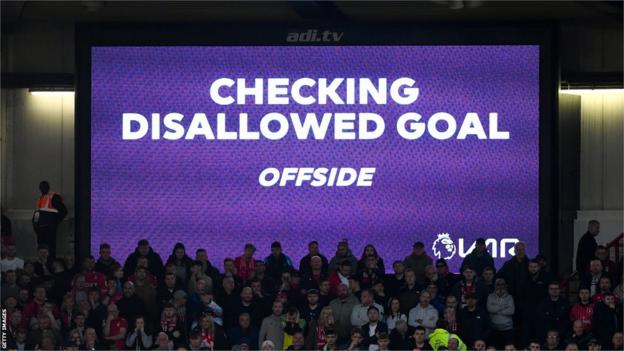 Premier League: VAR has made six incorrect interventions this season.

Premier League video assistant referees have made six incorrect interventions this season – and also missed another six incidents when they should have stepped in.A five-person independent panel was introduced this season to conduct a weekly review of Key Match Incidents (KMI) for all top-flight games.BBC Sport understands the panel has gone through hundreds of incidents and identified 48 situations when VAR needed to get involved, with 42 correct decisions made.However, it found six incidents were missed completely and on another six occasions, VAR overturned on-field decisions that had initially been right.It is not known what the individual decisions were but the Premier League’s newly appointed chief refereeing officer, Howard Webb, is determined to improve standards.Given the time he spent in Major League Soccer (MLS), where VAR has been in use since 2017, it is no surprise Webb, who refereed the 2010 World Cup final, is an advocate of the system.However, he does realise its implementation in the English game has not gone smoothly.It is understood a new VAR coach, Phil Bentham, whose background is in rugby league, has now been appointed and that Webb intends to visit all top-flight clubs and some in the Football League early in the new year to discuss officiating within the game as a whole.Premier League wants to be part of temporary concussion subs trialThe use of concussion substitutes also continues to be a controversial subject in the Premier League.The Professional Footballers Association renewed its call for temporary substitutes to be allowed at the end of October when Aston Villa goalkeeper Emi Martinez stayed on the field after taking a blow to the head against Newcastle but was then replaced minutes later.Premier League doctors feel the use of temporary substitutes would bring positive benefits and, together with France’s Ligue 1 and North America’s MLS, the league has written to the game’s rule-making body, Ifab, through the World Leagues Forum, to say they are willing to be part of a trial next season.The World Leagues Forum and Fifpro have also written a letter, seen by BBC Sport, asking Ifab to allow the introduction of trials of temporary concussion substitutes.The Premier League does not expect a response until March and realises the request may be rejected as there has been no change in Ifab’s belief, supported by at least one major European league, that temporary substitutions could cause more problems by rushing concussion assessments.Ifab remains of the view that any player suspected of concussion should be replaced completely.Cunha could play for Wolves on 4 JanuaryBBC Sport understands the Premier League has decided to treat 1 and 2 January, which fall on Saturday and Sunday, as working days for player registration purposes.This means clubs signing players can get them registered as soon as the January transfer window opens, in time for match round 19, which starts with Liverpool’s trip to Brentford on 2 January.For Wolves it is significant as it potentially allows Matheus Cunha to feature in the Midlands derby at Aston Villa on 4 January, providing the Brazilian’s loan move from Atletico Madrid is completed on time.It has also been discovered the average length of Premier League games has increased by 38 seconds this season as referees have become more proactive in dealing with time-wasting.However, while that initiative will continue, league officials are not expecting to see matches get extended to the same levels as some games did at the World Cup in Qatar, when matches lasting more than 100 minutes became the norm.

this article was originally published by BBC Sport.