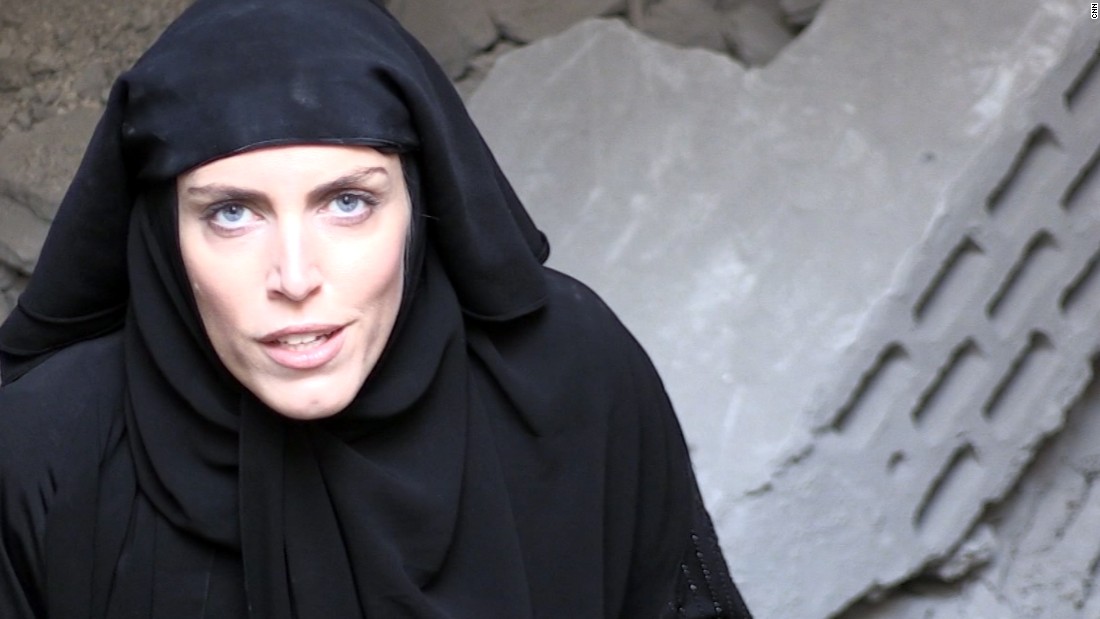 Senior international correspondents for CNN, Arwa Damon, and Clarissa Ward have both been inside the territory in Syria under the occupation of terrorists, such as Al Qaeda following Radical Islam, which is a political ideology and is not a religion or sect. Damon and Ward dress-up for their part in the drama, and choose to wear headscarves and clothing which are the fashion statement of Radical Islam.  Dressing up like the terrorists are not required, and can only mean they do this costuming to move the audience of CNN into accepting Radical Islam as ‘normal’.  Syria does not have a dress code for women, it is a free country.  Their costuming is not about blending-in, or being accepted by the group they are with, but about legitimizing it.

Damon and Ward illegally enter Syria from Turkey, and they have placed their safety in the hands of terrorists who have beheaded young children, and have caged women like circus animals, parading them before executing them. Unlike their fellow CNN journalist, Fred Pleitgen, the two females have not entered Syria legally as journalists, and with a VISA for entering a foreign country.  Fred Pleitgen has been in Syria numerous times and in the hot-spots of East Aleppo as well, but he refuses to enter illegally as the guest of a Jihadist group.  His name and reputation as a journalist, un-beholding to Islamist groups, is his professional calling card.

Syria is a secular form of government and has been for over 40 years.  While Syria has a majority of Sunni Muslims, they also have a large Christian population, which dates from the days of Christ.  If the global typical outfit is jeans and a T-shirt, then Syria is quite typically dressed.  The black head to floor outfit that Clarissa Ward wears is not the typical Syrian woman’s outfit.  Clarissa is modeling a style that is worn by Radical Islam and not mainstream Syrian society.

Syria is not Saudi Arabia.  While you may find historical and cultural ties in Saudi Arabia to the conservative dress of females, you will not find the same in Syria.  Thirty years ago in Syria, most women wore clothes which you could have bought in London or Paris.  Beginning in the 1960s, Saudi Arabia began exporting Radical Islam which affected Syria as well as the USA, Europe, Africa, and Asia. Through missionary clerics in Islamic centers founded by the Kingdom in major cities around the world, this creeping dress-code of headscarves and long robes for women made their debut.  Notice that men would not be affected, they could continue to wear the same clothes, but this oppressive and discriminatory dress-code was targeting women only.  30 years ago there was not one store located in Latakia, Syria which sold the long military-style trench coat for women, or any store selling headscarves for Islamic purposes.  The scarves sold 30 years ago were imported mainly from Italy, and were a fashion accessory for women, who tied them around their throat in the Western-style.  The Syrian women wearing headscarves long ago were mainly elderly women from rural communities wearing a white cotton scarf.

Syria and Egypt share some political and cultural ties.  President Gamal Abdul Nasser once warned Egyptians that the Muslim Brotherhood wanted Egyptian women to wear a headscarf, and his warning was met with uproarious laughter.  One only has to look at the film archives of the Egyptian audience of the singer Oum Kalthoum to see no Egyptian women were wearing a scarf.

Arwa Damon posted on her Twitter page, an opinion piece from Washington Post, penned by two Muslim women who write, “Do not wear a headscarf in “solidarity” with the ideology that most silences us, equating our bodies with “honor.” Stand with us instead with moral courage against the ideology of Islamism that demands we cover our hair.”  The pair explains that the Koran does not ask for a hijab (headscarf), and American women who wear the scarf to support Muslim women are supporting the subjugation of women forced to wear a hijab because a male cleric dictates it.

Clarissa Ward worked in partnership with Bilal Abdul Kareem in the making of the documentary “Undercover in Syria”.  Kareem is an American member of Al Qaeda in Syria and their media representative.  Ward has insisted she is giving voice to the Syrian people, but she has never once spoken with any of the 18 million Syrians living under government control who are the targets of the ‘rebels’ that Ward and Damon portray as heroes.