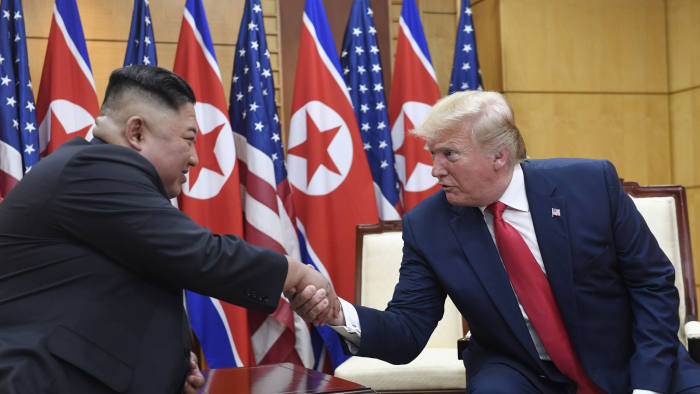 After Seven-Month Hiatus, US-DPRK Denuclearization Talks to Resume This Weekend

After a seven-month hiatus, negotiations between the United States and Democratic People’s Republic of Korea to rid the Korean Peninsula of nuclear weapons and achieve peace are set to resume this weekend.

Officials in both Washington and Pyongyang have confirmed the meetings are set to resume at the end of the week, signaling a return to diplomacy after seven tense months of posturing.

“The DPRK and the US agreed to have preliminary contact on Oct. 4 and hold working-level negotiations on Oct. 5,” North Korean First Vice-Minister of Foreign Affairs Choe Son Hui said in a Tuesday statement, the Korean Central News Agency reported.

US State Department spokeswoman Morgan Ortagus confirmed to Reuters in a Tuesday statement that the two sides “plan to meet within the next week,” but noted she did not have further details to share.

It’s unclear where the talks will take place.

In early September, Choe urged the US to “quit its current calculation method” and return to the negotiating table before the end of the month, possibly during the UN General Assembly meeting. The day before, US Secretary of State Mike Pompeo had given similar overtures, a change in tone from months previous, in which Pompeo and other US foreign policy leaders, such as then-national security adviser John Bolton, took a dimmer view of talks with Pyongyang.

Two weeks before, DPRK Foreign Minister Ri Yong Ho called Pompeo the “diehard toxin of US diplomacy” who employs “hackneyed sanctions rhetoric,” and the foreign ministry demanded the US send a more “mature” negotiator than Pompeo, who has headed some past talks with Pyongyang, both as state secretary and CIA director.

Negotiations first began in June 2018, when US President Donald Trump and Kim Jong Un, chairman of the State Affairs Commission and supreme leader of the DPRK, met in Singapore and hashed out a basic path to peace and denuclearization on the Korean Peninsula. A subsequent summit in Hanoi, Vietnam, the following February ended without progress, however, as both sides proved unwilling to yield without further concessions from the other side.

After the Singapore summit, Kim set about a series of unilateral moves that greatly impaired the DPRK’s ballistic missile and nuclear weapons programs, dismantling key test sites that had previously provoked international alarm. While the DPRK has both nuclear weapons and intercontinental ballistic missiles, intelligence conclusions among adversarial powers do not agree as to whether or not Pyongyang has successfully miniaturized a nuclear warhead, enabling it to be placed on top of an ICBM and giving it the capacity to strike as far away as the US West Coast.

However at the Hanoi summit and in the months leading up to it, Washington negotiators refused any kind of concession to Pyongyang, especially in the area of economic sanctions, until “verifiable” denuclearization had been fully achieved. That trend continued after, despite warnings from the United Nations that bad weather and a poor harvest threatened the socialist country with famine in 2019 if trade barriers were not lowered.

In the months that followed, report after report flowed in from hawkish policy think tanks like the Center for Strategic and International Studies, which the mainstream media willfully amplified, concluding Trump had been duped by Kim and that the latter was secretly restarting the weapons programs he had only pretended to dismantle.

When the DPRK began testing new short-range missiles in May and again, more intensively, in July and August, it seemed to fulfill critics’ most dire predictions. However, after analysts concluded the missiles were most likely a form of mobile rocket artillery, Trump shrugged off the concerns, noting their agreement only banned the use of medium and long-range ballistic missiles.

The DPRK tested its first nuclear weapon in 2006, the culmination of a decades-long effort begun by Kim Jong Un’s grandfather, DPRK founder Kim Il Sung, to secure the country’s safety from enemy attack. Once a Japanese colony, Korea was split at the end of World War, with the northern half being liberated by the Soviet Union before the Japanese surrender and the southern half being surrendered to US forces, with each half being formed into a separate country allied with the power that liberated it. Since 1950, the DPRK has technically been at war with the United States and South Korea, since no permanent peace treaty was ever signed at the conclusion of the shooting war in 1953. Instead, a ceasefire established a heavily fortified demilitarized zone separating the two Koreas.

The US has long warned that a nuclear-capable DPRK was a threat to the region, but Pyongyang maintains a no-first-use policy and claims the weapons exist purely as a deterrent. Pyongyang’s message has gone effectively unchanged since before negotiations began, claiming before and since the June 2018 summit that it was willing to give up its nuclear program and nuclear weapons as part of a larger denuclearization of the region and in conjunction with the signing of a permanent peace treaty with the US.

De-escalation has made much better progress between the two Koreas, which saw unprecedented warming of relations last year. In September 2018, Kim and South Korean President Moon Jae In signed an end-of-war declaration and significantly lowered barriers to cross-DMZ travel and trade. South Koreans also stepped in to provide food and medical aid to the North this past Spring, when the US refused to yield to DPRK aid calls. However, those relations have somewhat cooled in recent months as Seoul began a new weapons buildup and participated in war games with the United States, which Kim claimed violated a previous agreement to refrain from provocative exercises, which rehearse strikes on the DPRK.