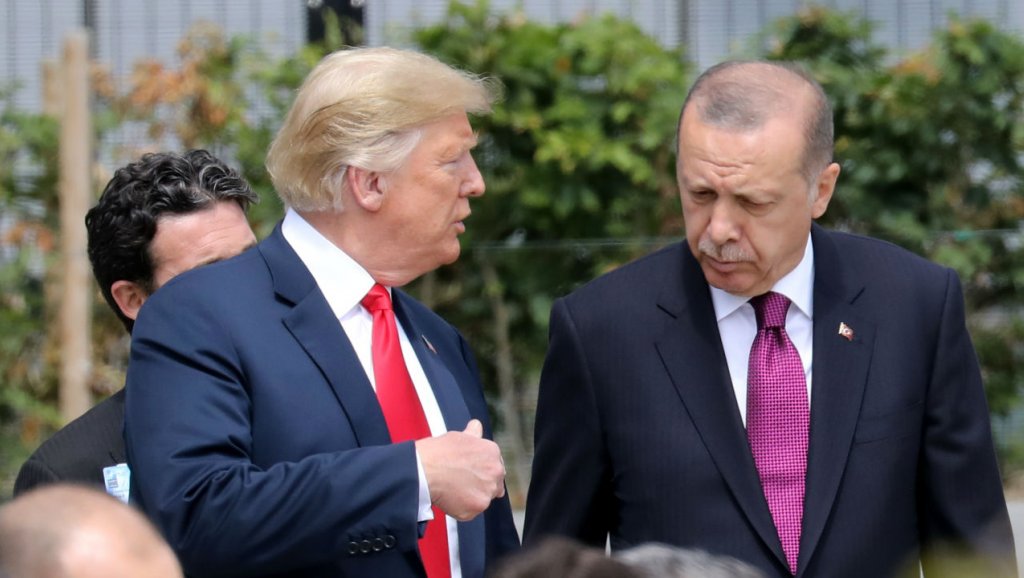 Is “Operation Peace Spring” a Trap Sprung by Trump on Turkey?

It’s worthwhile to wonder whether “Operation Peace Spring” is a trap sprung by Trump on Turkey after the US created the conditions for Ankara’s invasion but then proceeded to threaten punitive measures against the country after its nominal NATO “ally” bit the bait and conventionally invaded Syria for the third time.

Turkey formally launched its third conventional invasion of Syria earlier this week under the name “Operation Peace Spring” after the so-called “peace corridor” that it earlier tried to jointly establish with the US failed to remove the YPG (who Ankara regards as terrorists) from the borderland region. This was by no fault of Turkey’s own but was entirely the result of the US not fulfilling the promise that it made to its nominal NATO “ally”, which in turn triggered the ongoing operation. Many observers have interpreted Trump’s decision to withdraw American troops from the conflict zone (but not all of Syria) as signaling his approval of Turkey’s military advance, though that’s not necessarily the case since his administration quickly responded by threatening punitive measures against Ankara immediately afterwards. In fact, it appears as though Trump sprung a trap on Turkey by provoking it to launch another conventional invasion of Syria in order to then have the pretext for imposing multilateral pressure upon it as punishment for what’s really America’s anger at its S-400 purchase.

It’s admittedly a complex theory to immediately comprehend so it’ll now be explained more at length. The US certainly had the military capability to have removed the YPG from the borderland region, but instead it armed them with “sophisticated weaponry” and thus tempted its “partner” to conventionally intervene in the Arab Republic for the third time. This immediately drew the condemnation of the EU, as well as Saudi Arabia and interestingly also Turkey’s fellow Astana member Iran. The first-mentioned is extremely important because it’s Turkey’s top trade partner, so its possible compliance with prospective American sanctions against the country could have devastating economic consequences. It’s most likely because of this very probable scenario that Turkey has resorted to threatening the EU with “Weapons of Mass Migration” by warning that it’ll unleash millions of “refugees” against it if Brussels continues to condemn Ankara’s invasion. This threat might therefore get the EU to think twice about the wisdom of opposing Turkey’s operation.

As for the Iranian angle, Tehran’s opposition to Turkey’s latest military campaign might drive a wedge between these two Astana members if the Islamic Republic is truly sincere with what it said and isn’t just virtue signaling support to its Syrian Resistance bloc ally. After all, Iran is in such a desperate international situation nowadays following the US’ unilateral reimposition of sanctions against it and the pressure its adversary has put upon others to follow suit on pain of secondary sanctions that it literally can’t afford to cut off contact with one of its only reliable regional trade partners. Therefore, the US’ supplementary plan of splitting the Astana peace process’ members up probably won’t succeed, especially since Iran’s other sanctions pressure valve — Russia — has endorsed Turkey’s actions as “absolutely legal” so long as it doesn’t endanger Syria’s territorial integrity. Moscow is maintaining military contact with Ankara all throughout the operation, and it also reportedly plans to organize “reconciliation” talks between Turkey & Syria and Syria & the Kurds (though the latter is doubtful).

Iran is therefore becoming irrelevant in terms of the larger dynamics of this peace process, exactly as the US, Russia, and their shared “Israeli” ally want, and a political solution to the long-running conflict finally appears to be on the horizon. Provided that Turkey isn’t baited into going beyond its promised 30-kilometer-deep “buffer zone” and thus getting bogged down in a quagmire (like Syria might want), it’s possible that a major Moscow-mediated quid pro quo could be reached between all warring parties whereby the Damascus affords the Kurds with limited autonomy (possibly including the right to maintain their “militia” and a large percentage of natural resource proceeds) in exchange for them allowing the Syrian Arab Army to patrol either the “buffer zone” or the actual international border in the event that Turkey withdraws. Ankara, for its part, would probably request that its occupied regions be granted autonomy as well so that the majority-Islamist population there won’t be forced to live under the secular standards of the democratically elected and legitimate Syrian government.

That said, none of this might preclude the US (and possibly also the EU) from imposing sanctions against Turkey, in which event the country would probably become more economically dependent on Russia, so much so that it might also seek to “balance” this out by enhancing relations with China as well. All told, that scenario would result in Turkey becoming more multipolar and possibly also strengthening its trade ties with Iran if the Islamic Republic proves that its condemnation of the invasion was meaningless rhetoric not backed up by punitive actions, which would altogether change the geostrategic dynamics of the Mideast. Turkey might have been tempted to walk into the trap that Trump set for it, but that doesn’t mean that it nevertheless can’t find a silver lining in the situation, though it should also bear in mind that the US will likely react to the aforementioned developments by doubling down on its recently reinvigorated military alliance with Greece and begin planning how to put more pressure upon Ankara from the Eastern Mediterranean vector in the coming future.