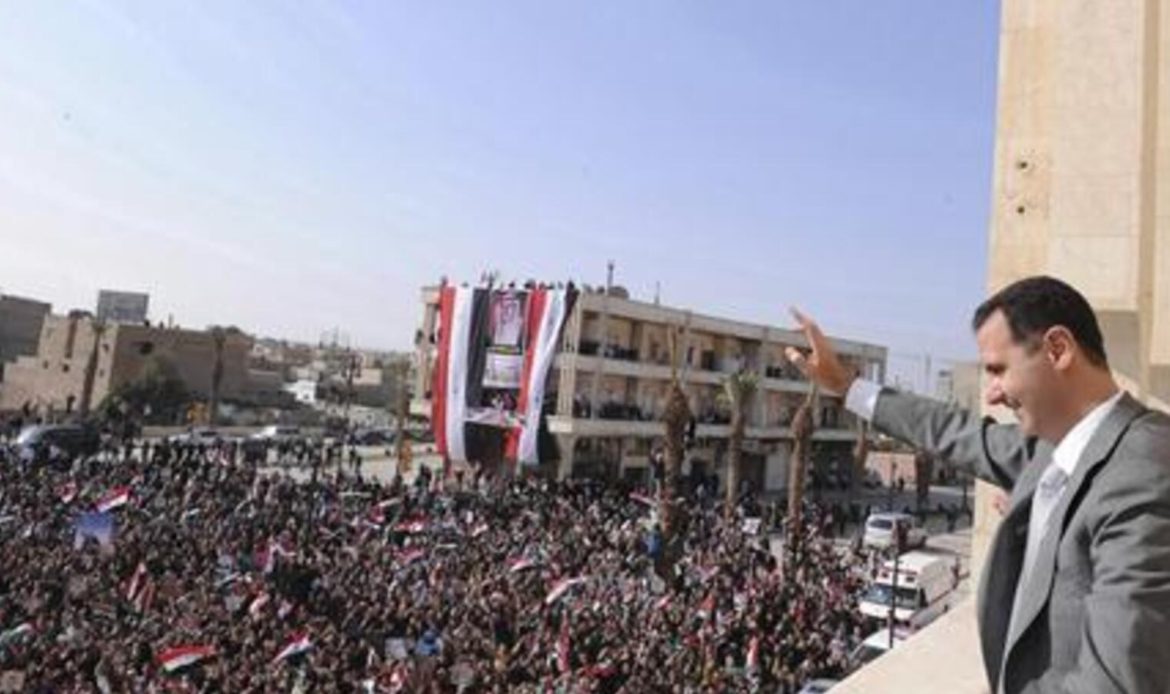 “Our proposal is for the terrorists to lay down their arms, leave their equipment, destroy the traps they have created, and leave the safe zone we designated, as of tonight,” Turkish President Erdogan said. “If this is done, our Operation Peace Spring will end by itself.”

Erdogan of Turkey has stated he will not order a ceasefire in Syria, even though his NATO partners have asked for it.  Pres. Trump has sent VP Pence to Ankara today to ask for a ceasefire, and to explain the consequences should Erdogan refuse.

Turkey began ‘Operation Spring Peace’ one week ago with the stated goal to eliminate Kurdish terrorists from the border region and to create a ‘safe-zone’ in northeast Syria for Syrian refugees currently in Turkey to return to.  Trump inadvertently gave the green-light to Erdogan in a phone call, after which Trump ordered the US troops in the area to withdraw.  Trump has explained his withdraw order was not a stamp of approval on Turkey’s military incursion into Syria but instead was done to keep the US troops safe.

Once Turkey began the military attack, first by airstrikes and then using ground troops, the international community, including American critics of Trump, began an outcry based on humanitarian concerns of a possible bloodbath of the Kurdish population.  Additionally, the US military and legislators have expressed dismay and regret at having left behind a valuable ally in the fight against ISIS: the Kurdish militia Syrian Democratic Forces (SDF), who were to be the target of the Turkish invasion into Syria.

The Kurds are a minority in Syria, and while they do have towns and villages in the northeastern corner of Syria, they are still a minority there. During the Syrian conflict which began in 2011, the Kurds of Afrin saw an opportunity to benefit from aligning themselves with the Obama backed ‘Free Syrian Army’ (FSA), who were Syrian mercenaries supported by Obama and the US Congress.  The FSA was openly Jihadist, following the political ideology of Radical Islam, with the final goal of ‘regime change’ to pave the way for an Islamic government in Syria.  Obama and his right hand in Syria, Republican Senator John McCain, were not themselves adherents of Radical Islam, but used the assets on hand for ‘boots-on-the-ground’, knowing that the US Congress would never approve of a ‘regime change’ project in Syria.  Getting US troops to invade Syria was too complicated, and the Jihadists were local assets that only required funding and weapons, which was done covertly through a CIA program, and then later McCain lobbied the US Congress for funding.  Trump pulled the plug on the CIA funding of the FSA, which had by then become Al Qaeda after the FSA failed to find support among the Syrian population, and was forced to recruit Jihadists from around the world, who came pouring in through Turkey.

The Kurds were fighting the Syrian government to establish a Kurdish ‘state’.  The FSA was fighting to establish an Islamic ‘state’ in Damascus, while the Kurds took advantage of the chaos throughout the country to take their piece of the pie: the northeastern section, which they began to call ‘Rojava’, and later they termed the Autonomous Administration of North East Syria (NES).   Their political ideology was extreme socialism and secular.  The majority of Kurds are Sunni Muslims, as were the FSA; however, we have seen in the Kurdish city of Kobani hundreds of the Sunni have changed their religion to American Evangelical Christianity, which is linked to the support of Israel.  A female, former Muslim, convert to the church in Kobani commented, “I don’t mind leaving Islam, but I want to continue to wear my headscarf.”

In 2014 the ISIS attacked Kobani and the Kurds fought back, and eventually became the US ally in the fight to defeat ISIS. The US military used the assets on hand to fight ISIS, and eventually, in a small village in northeast Syria, they were declared defeated in 2019.  It was the SDF who fought alongside the US troops to defeat ISIS, with the US having lost 5 soldiers, compared to about 11,000 Kurds. Many cautioned the SDF and their political wing in NES that the US would eventually abandon them, as they had done with the FSA. The Kurds had confidence their Rojava would remain, and they remained loyal to the US promises and support.

Posters of Abdullah Ocalan are plastered everywhere in Kobani, and throughout NES.  He is the imprisoned leader of the PKK, an internationally recognized terrorist group, responsible for 40,000 deaths in Turkey for over 30 years. The Kurds in Syria claim they are SDF and YPG and are not connected to PKK; however, you will see SDF soldiers with PKK patches on their uniforms, and with the posters of Ocalan everywhere, it is obvious that the Kurds are PKK, and the PKK are Kurds.  This did not bother the US Pentagon, because they had to use the assets on hand to defeat ISIS.

Erdogan continuously complained to the US about their support of Kurdish ‘terrorists’ in northeast Syria, even long after ISIS was defeated.  To Turkey, the SDF is the PKK and had set up a ‘state’, NES, on the Turkish border, and this was unacceptable and reason enough to invade Syria to neutralize the threat to Turkey’s national security.  Now, the Turkish ground troops are face-to-face with the Syrian Arab Army (SAA) at Manbij. The land is Syrian, the SAA are all Syrians, as it is mandatory military service in Syria for all males over 18 who are not enrolled in a University.  The SDF has recently agreed with Damascus to align with the SAA to repel the invasion of Turkey. However, the ground troops used by Turkey to invade Syria are not Turkish: they are Syrians who were formerly terrorists, who survived the battles against the Kurds and the US, and escaped to Turkey through Idlib, and fell into the open arms of the Turkish military, who saved them for the invasion of northeast Syria as they were the assets on hand.

Russian security forces are patrolling Manbij and are tasked with keeping the SAA and the former ISIS mercenaries employed by Erdogan from clashing.  The place is a tinder-box ready to blow. In a phone call between Russia and Turkey today, an invitation for Erdogan to meet Putin in Moscow was accepted.

“Everything related to the destiny and future of Syria is a one hundred percent Syrian issue, and the unity of Syrian territory is self-evident and not up for debate or discussion,” President Bashar al-Assad stated in his speech on August 2017.  After more than 8 years of war, the Syrian President’s promise is poised to be fulfilled for the Syrian people.

Bashar_al_assad Damascus Erdogan Kurds Moscow Pence putin Russia SDF Syria Syrian_Army Turkey USA
Previous ArticleThe US Isn’t Serious about Leaving Syria at All
Next Article Will Iran be the Next to Withdraw from Syria?