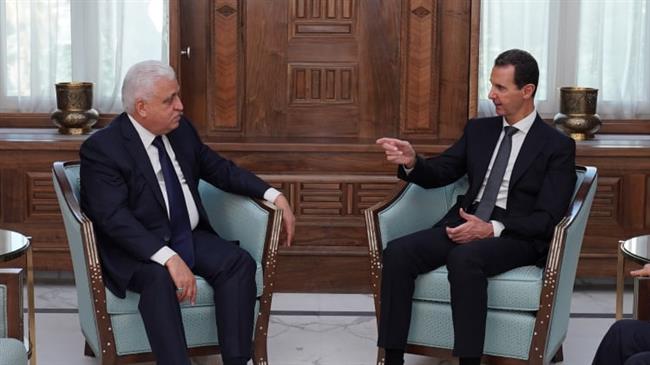 Assad: Syria will respond through all legitimate means to Turkish aggression

Syrian President Bashar al-Assad says the Damascus government will respond through all legitimate means available to the ongoing ground offensive by Turkish soldiers and allied Takfiri militants against Kurdish forces in the northern part of the war-battered Arab country.

During a meeting with visiting Iraqi National Security Advisor Falih al-Fayyadh in Damascus on Thursday, Assad said foreign schemes in the Middle East region have been foiled throughout history, and the Turkish criminal aggression, launched by President Recep Tayyip Erdogan’s administration, on Syria falls within such plots.

“No matter what false slogans could be made up for the Turkish offensive, it is a flagrant invasion and aggression. Syria has frequently hit (Turkish-backed) proxies and terrorists in more than one place. Syria will respond to the assault and confront it anywhere within the Syrian territory through all legitimate means available,” the Syrian leader said.

Fayyadh, for his part, conveyed Iraqi Prime Minister Adel Abdul-Mahdi’s message, which focused on further expansion of bilateral ties between the two countries in various areas of interest, particularly with regard to combating terrorism and border security in light of the recent developments, economic cooperation and re-opening of border crossings.

The meeting was also attended by Syrian Ambassador to Iraq Sattam al-Dandah.

Assad’s remarks came after an unknown source in the Syrian Ministry of Foreign Affairs and Expatriates earlier on Thursday strongly condemned the ongoing ground offensive by Turkish forces and their allied militants against Kurdish regions of the country.

The source said, “This treacherous Turkish aggression is the outcome of the expansionist ambitions and illusions of Erdogan’s regime, and it affirms that the regime is classified among terrorist groups to which it has provided all forms of support. The offensive deals a heavy blow to the efforts aimed at finding a solution to the crisis in Syria. It makes, therefore, the Turkish regime lose its position as a guarantor of the Astana peace process as its aggression completely contradicts the principles and decisions of the process.”

According to a statement released by Russian Foreign Ministry, during the phone call, the two foreign ministers discussed the situation in northeastern Syria and expressed their readiness to facilitate relevant talks.

Both Lavrov and Zarif emphasized that it was imperative to reach long-lasting stabilization on the eastern side of the Euphrates River via the “dialogue between Damascus and Ankara, as well as between the Syrian authorities and representatives of Syrian Kurds,” the statement added.

The foreign ministers of Iran and Russia also declared the readiness of their respective countries to facilitate talks among various parties involved in the ongoing developments in northern Syria.

Zarif also discussed the situation in northeastern Syria in phone calls to his Iraqi and Syrian counterparts.

Furthermore, US Vice President Mike Pence met Erdogan in Turkey on Thursday on a mission to persuade him to halt the offensive against Kurdish fighters in northeast Syria.

An unnamed Turkish official, however, said the military operation would continue.

“Negotiating with a terrorist organization or turning back from the ongoing operation is not on the agenda,” the official noted.

Turkish-language CNN Turk television news network said Turkey had rejected US President Donald Trump’s appeal to reach a deal to avoid conflict in northeastern Syria, and his letter to Erdogan dated October 9 was “thrown in the trash.”

“The letter Trump sent did not have the impact he expected in Turkey because it had nothing to take seriously.

“What is clear is that Turkey does not want a terrorist organization on its border and the operation will not stop because of the reaction that has been coming,” a Turkish official told Reuters.

The White House has released a letter from Trump to Erdogan, which read: “Don’t be a tough guy” and “Don’t be a fool!”

Foreign Minister Mevlut Cavusoglu said on Wednesday Turkey would retaliate against US sanctions over his country’s military incursion into northeast Syria.

Speaking in parliament, Cavusoglu described all threats and sanctions against Turkey as unacceptable, adding that Ankara expected the US Congress to turn back from its “damaging approach.”

On Monday, Trump imposed sanctions on Turkey over Ankara’s military operation in northeast Syria, and called for an immediate ceasefire.

The sanctions apply to individuals, entities or associates of the Turkish government involved in “actions that endanger civilians or lead to the further deterioration of peace, security and stability in northeast Syria,” Pompeo said in a statement.

On October 9, Turkish military forces and Ankara-backed militants launched a long-threatened cross-border invasion of northeast Syria in a declared attempt to push Kurdish militants from the People’s Protection Units (YPG) away from border areas.

Ankara views the US-backed YPG as a terrorist organization tied to the homegrown Kurdistan Workers’ Party (PKK), which has been seeking an autonomous Kurdish region in Turkey since 1984. The YPG constitutes the backbone of the so-called Syrian Democratic Forces (SDF).

The Kurdish-led administration in northeastern Syria says the Turkish offensive has killed 218 civilians, including 18 children since it started. The fighting has also wounded more than 650 people.

Turkish authorities say 20 people have been killed in Turkey by bombardment from Syria, including eight people who were killed in a mortar attack on the town of Nusaybin by YPG militants on Friday.