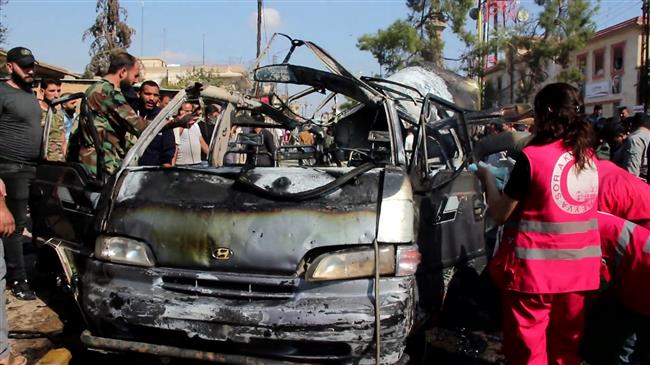 At least seven Syrian civilians have been killed and 70 others wounded as a result of multiple bomb attacks in the northeastern province of Hasakah.

The causalities took place on Monday when three explosives-laden cars went off almost consecutively in the Kurdish-majority city of Qamishli, with two of them having been detonated in a street and the third near a hotel in the city center, according to AFP.

The so-called Syrian Observatory for Human Rights confirmed the report and said the attacks also caused damage to public and private properties including shops and cars.

Photos from the scene showed charred cars and smoke rising from the site of the blasts.

There was no immediate claim for the bombings, but they occurred shortly after the Daesh terrorist group said it was responsible for the killing the same day of an Armenian Catholic priest from the same city.

The priest and his father were killed by gunfire en route to the eastern Syrian province of Deir al-Zour to inspect the restoration of a church there.

Northern Syria has been rocked by several deadly bomb attacks since Turkey began an offensive inside Syrian territory last month to clear the area of what it calls anti-Ankara terrorists.

On October 9, Turkish military forces and Ankara-backed militants launched a cross-border invasion of northeastern Syria in a declared attempt to push the People’s Protection Units (YPG) militants from border areas. The military offensive has since displaced around 200,000 people.

Ankara is seeking the establishment of a 32-kilometer “safe zone” clear from the presence of Kurdish militants in northeastern Syria. Turkey wants the area to be used for the relocation of two million Syrian refugees living in Turkey.

After seizing a 120-km swathe of land along the border, Turkey struck deals with the US and Russia to keep the Kurdish militants out of that so-called buffer zone.

On October 22, Turkish President Recep Tayyip Erdogan and his Russian counterpart, Vladimir Putin, signed a memorandum of understanding that asserted YPG militants must withdraw from the Turkish-controlled “safe zone” within 150 hours, after which Ankara and Moscow would run joint patrols within the area.

Ankara regards the US-backed YPG as a terrorist organization tied to the homegrown Kurdistan Workers’ Party (PKK) militant group, which has been seeking an autonomous Kurdish region in the Anatolian country since 1984.