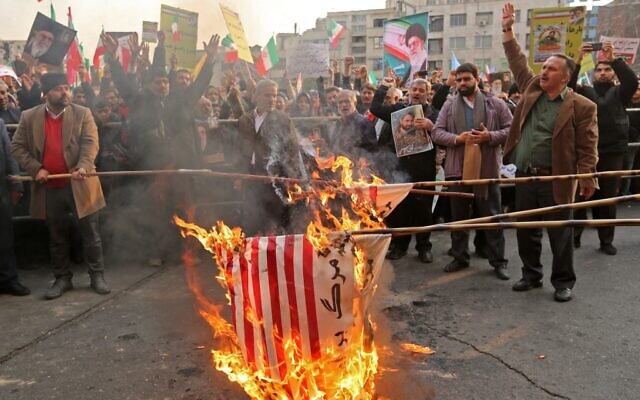 Iranian pro-government demonstrators burn makeshift US flags as they gather in the capital Tehran's central Enghelab Square on November 25, 2019, to condemn days of "rioting" that Iran blames on its foreign foes. - In a shock announcement 10 days ago, Iran had raised the price of petrol by up to 200 percent, triggering nationwide protests in a country whose economy has been battered by US sanctions. (Photo by ATTA KENARE / AFP)

US President Donald Trump has appealed directly to the protesters in the streets of Iran, wading into the grief and fueling anti-government discontent, after Tehran admitted to have accidentally shot down a Ukrainian jet.

“To the brave, long-suffering people of Iran: I’ve stood with you since the beginning of my Presidency, and my Administration will continue to stand with you. We are following your protests closely, and are inspired by your courage,” Trump wrote both in English and Farsi, addressing the protesters in Iran.

“The world is watching,” Trump said in a separate tweet, warning the government of Iran against “another massacre of peaceful protesters” and demanding it “allow human rights groups to monitor and report facts from the ground.”

State Secretary Mike Pompeo’s meddling in Iran’s affairs was even more blatant, stopping just short of an open call for a regime change. “The voice of the Iranian people is clear,” Pompeo stated, tweeting out footage of the protest in Iran.

Earlier on Saturday, British ambassador to Iran, Rob Macaire, was briefly detained outside of Amirkabir University in Tehran over his alleged role in ‘inciting and directing’ anti-government protesters. The UK Foreign Office called it a “flagrant violation of international law,” insisting that Macaire was detained without any “grounds or explanation.”

The General Staff of the Iranian Armed Forces admitted that Flight 752 was shot down on Wednesday due to human error, on the day that Tehran was responding to the US assassination of General Qassem Soleimani.

Offering his condolences to the victims’ families, Iranian President Hassan Rouhani apologized for the “disastrous mistake” on behalf of Iran, fully acknowledging that the tragedy was caused by the erroneous actions of his country’s military.