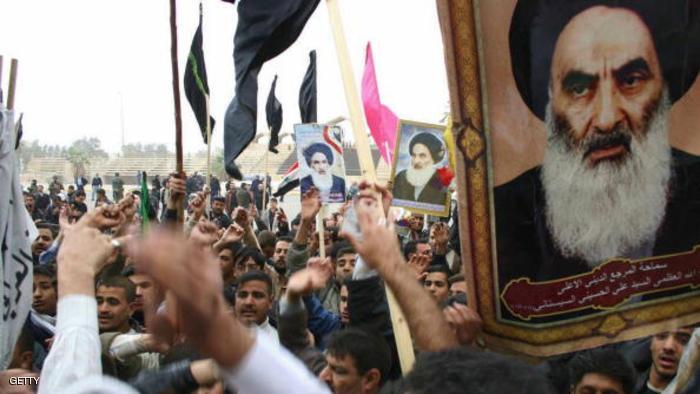 Kirkuk, IRAQ: Supporters of the dominant Shiite Unified Iraqi Alliance list brandish pictures of Grand Ayatollah Ali al-Sistani and their ink-stained fingers to show their participation in the general election, during a parade in Kirkuk, north of Baghdad. Though the Independent Electoral Commission of Iraq cautioned that ballots were still being counted, preliminary estimates indicated results similar to the last elections, with the religious Shiite Alliance sweeping the south again, and the Kurdish Alliance has a commanding lead in the north. AFP PHOTO/MARWAN IBRAHIM (Photo credit should read MARWAN IBRAHIM/AFP/Getty Images)

Iraq’s leading Shiite cleric, Grand Ayatollah Ali al-Sistani, has condemned the use of force to disperse protest camps across the country.

He also renewed calls for early elections to be held in a free and fair manner.

Sistani, who delivered his message through a representative at Friday prayers in the holy city of Kerbala, also “heavily condemned” US President Donald Trump’s Middle East peace plan, Reuters reported.