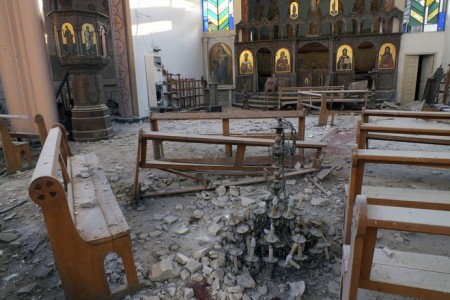 The western media has focused on Idlib as the last ‘rebel’ held area in Syria; however, it is held by Al Qaeda, not Syrian rebels.  The Syrian rebels, aka “Free Syrian Army” , ceased to exist years ago, when the Al Qaeda terrorists arrived through Turkey, supported by the US-NATO-EU bloc.  The western media have focused only on the suffering of the civilians in Idlib; however, they fail to acknowledge those civilians are not from Idlib.  The original residents of Idlib left years prior when the terrorists occupied the area. The people of Idlib fled for their lives, leaving behind olive farms, crops, farmhouses, city shops and businesses.  The Idlib homeowners are waiting to return, but they can’t before the terrorists are removed. The terrorists took everything in sight and promised to turn Idlib into an ‘Islamic State’ in an agricultural province on the border with Turkey.  That border was necessary to their plan because over that border comes their funds, fighters, weapons, food and humanitarian aid to feed and clothe their families, and equally importantly, over that border comes the hundreds of western journalists who will defend the terrorists and write one side of the Syrian story and leave the reader convinced that everyone should be rooting for Al Qaeda to win the war.

However, those journalists never bother to inform their readers of the Syrian citizens, the neighbors of Idlib, who have been maimed, raped, and massacred by the terrorists in Idlib. These are the Syrians who are praying for the Syrian Arab Army and their Russian allies to advance and defeat the terrorists.  These are Armenian Christians of Kessab who have been displaced, and some made penniless refugees in foreign countries, who may never see their home again.  Kessab may never recover. Its Armenian heritage may be lost to the history books. Kessab is not safe because it sits next to Idlib and has been a continual target of the missile attacks by the Al Qaeda in Idlib.

Lillian Martin is an American citizen originally from Fresno, California.  Her husband is Syrian and they built their retirement home in Kessab. Decades of hard work, and paying taxes to ‘Uncle Sam’ culminated in the house in Kessab which the US-sponsored terrorists attacked, occupied and destroyed in March 2014.  “We can’t repair our house, and neither can any of my neighbors, because we are held hostage by the Al Qaeda terrorists in Idlib. We cannot repair and live in Kessab until Idlib is finished. We are praying for military progress there, to complete the job of defeating the terrorists.  The journalists all go to Idlib illegally and write articles based on what their hosts, the terrorists, have told them. What about my story? What about my neighbors who can’t live in their own home, can’t work in their farm or shop because of Al Qaeda shooting missiles at us continually?  Where is my justice? Who will tell my story?”

Karnik is also an American citizen. The terrorists destroyed his home and business.  His wife and small children are Syrians born in Kessab. They traveled to the US Embassy in Beirut numerous times asking for a VISA for his wife, and American passports for his small children, based on the fact their father is an American citizen.  All were denied, even though they were in a war zone and had lost everything they owned. He had wanted to take his wife and children to the USA and begin a new life there, but the American government refused to allow his family to be united and safe.  In the end, his wife and children left for the only country which would grant them citizenship, Armenia. He has remained in Latakia and found work, hoping that once Idlib is finished they can be a family once again in Kessab.

It all began on Mother’s Day, March 21, 2014, in the Armenian Christian village of Kessab, Syria.  The residents were mainly farmers, shop keepers, and involved in the tourism sector. Mother’s Day in Syria is one of the most important holidays, and reaches across all religions and sects, uniting all Syrians.

It was barely 6 am and most was still asleep.  The dishes, cakes, and delicacies to be spread out that afternoon for the traditional family gathering were yet to be prepared but were well planned out in advance among the many daughters, daughters-in-law, mothers, and wives.  It was supposed to be a happy family occasion; but, instead, it was turned into a nightmare of guns, bearded terrorists, blood, death and the end of the life known in Kessab for centuries. By the end of that day, many residents would be injured, traumatized and would never see their home again.  Their life as wandering refugees was thrust upon them at 6 am, and Kessab has never recovered.

In August of 2014 Dr. Declan Hayes, an academic, author and peace activist visited Kessab from his native Ireland.  He spent several days personally interviewing the survivors. They related the first sound they heard was helicopters.  The Al Qaeda terrorists who the Obama administration, NATO and the EU were supporting did not have access to helicopters; they only had guns, ammo and heavy artillery such as rockets, missiles, and mortars.  The distinctive sound of a hovering helicopter at 6 am on a Sunday morning is a sound they will never forget. That helicopter was the Turkish Army, under direct orders of President Erdogan, to assist the Al Qaeda terrorists who were soon pouring across the border from Turkey. The US-NATO-EU supported ‘opposition’ headquartered in Istanbul immediately posted to their official website, “Congratulations to the victorious troops who have conquered Kessab, the gateway to Latakia. The regime is soon to fall.” Ahmed Jarba, the head of the Syrian National Coalition, the political wing of the Free Syrian Army, traveled to Kessab and claimed a victory on April 1, 2014, and by May 14 he was sitting in the oval office at the White House with President Obama, Susan Rice, and John Kerry.

23-year-old Kevork Jourian was murdered by the terrorists, even though he was unarmed and trying to defend his parents.  They begged the terrorists to allow them to bury their son, they refused and said they wanted the dogs to eat the Armenian corpse.

Later, Samantha Power, then US Ambassador to the UN, claimed the terrorists who destroyed Kessab were not under the US direction, refusing to acknowledge The US-sponsored ‘Free Syrian Army’ alongside Al Qaeda were the terrorists who invaded Kessab.

The residents fled for their lives; however, the extremely elderly who were not mobile was left behind. 21 very elderly residents were left as captives of the Radical Islamic terrorists who eventually transported them across the border to Vikifli, Turkey where they remained as hostages against their will for 3 months.  On April 1, 2014, the US Ambassador to Turkey, Francis J. Ricciardone, Jr arrived to visit the hostages being held by the US-sponsored terrorists.  He had come with one question to be asked: were any of the elderly US citizens?  After they told him no, he left them as captives in a foreign country, even after they repeatedly begged through his translator, Khalil Nezar, to be allowed to go to Latakia where their family and neighbors were sheltering.  Finally, the Syrian Arab Army, assisted by Armenian commandoes sent from Armenia, liberated the village on June 15, 2014.  3 months had passed, in which time the terrorists had burned all 3 churches, dug up the graveyards looking for gold rings, destroyed the Catholic church’s valuable library, stole antiquities collected by the Catholic Priest Father Louisian, and dug up the bones of the Catholic Priest buried at the entrance of the church.  Erdogan grudgingly sent the elderly hostages to Beirut by plane, but not before one of them had died in captivity. Kessab waits eagerly for Idlib to be finished, and then the rebuilding and replanting of Kessab can finally begin.

This article is exclusive for mideastdiscourse.com