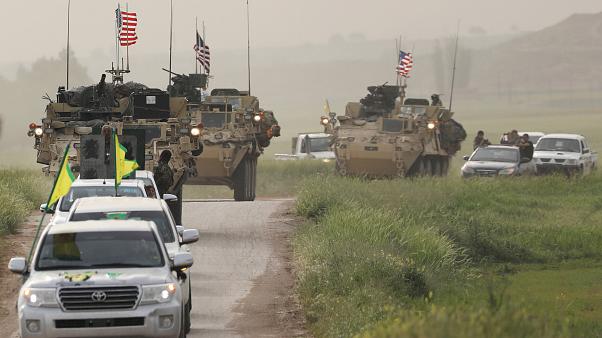 The so-called US-led military coalition purportedly formed to fight the Daesh Takfiri terrorist group has reportedly airdropped military and logistical equipment to oil-rich areas it has occupied in Syria’s eastern province of Dayr al-Zawr, as Washington and some of its regional allies vie to seize oil reserves and plunder natural resources in the war-battered country.

The report noted that the operation took place late on Saturday.

Back on March 11, the US-led alliance deployed long-range artillery systems to its base in the Omar oil field.

The official website of the US-backed Syrian Democratic Forces (SDF) said at the time that such reinforcements, consisting of heavy artillery weapons, were aimed at protecting military bases and supporting joint operations between the Kurdish-led militants and US-led coalition forces against Daesh.

“Americans are currently present in the northeastern part of the country, controlling all oil fields there and stealing our crude resources. If we manage to liberate the region from the American occupation, we will then revive our economy,” the Arabic service of Russia’s Sputnik news agency quoted the Syrian Ambassador to Russia, Riyad Haddad, as saying in an exclusive interview with Russia’s state-owned Rossiya 24 television news network on March 12.

In late October 2019, Washington reversed an earlier decision to pull out all of its troops from northeastern Syria, announcing the deployment of about 500 soldiers to the oil fields controlled by Kurdish forces in the Arab country.

The Pentagon claimed that the move was aimed at protecting the fields and facilities from possible attacks by Daesh. That claim came although US President Donald Trump had earlier suggested that Washington sought economic interests in controlling the oil fields.

US Secretary of Defense Mark Esper also threatened that the US troops deployed to the fields would use “military force” against any party that might seek to challenge control of the sites, even if it were Syrian government forces or their Russian allies.

On December 18, 2019, China’s special envoy for Syria said the United States’ pretext for extending its military presence in the Arab country, namely to protect Syrian oil fields, was untenable.

“Who has given the Americans the right to do this? And, at whose invitation is the US protecting Syria’s oil fields?” Xie Xiaoyan said at a press conference in Moscow.

“Let’s think the other way around: Will the US allow Syria to send troops to US territory to protect oil fields there?”