The Arab-Israeli alliance is fueling conflicts in the Middle East 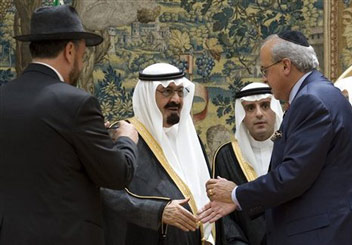 There are 2 camps in the Middle East: those countries which work with ‘Israel’, and those who do not.  The countries which have established relationships with ‘Israel’ are Turkey; United Arab Emirates (UAE); Saudi Arabia; Qatar; Bahrain; Oman; Jordan; Egypt. This group of countries is backed up by the US and the EU.

The world is split between 2 spheres of influence, with the US and EU on 1 side, and Russia and China on the other.  This situation is very similar to the ‘Cold War’ years when the world was split between the Soviet Union and the US.

The Arab Gulf role in the Middle East conflicts

In Syria, since 2011 the Arab Gulf countries, allied with Turkey and ‘Israel’, have sent and trained terrorists, who are following the political ideology of Radical Islam, which is not a religion, or a sect. These countries have bowed to the pressure of the US sanctions on Syria, and have refused to do business with Syria, even on humanitarian items.  They have also waged political war on Syria, by accepting the removal of Syria from the Arab League, which was proposed by Qatar at the beginning of the conflict.

In Libya, the Arab-Gulf countries have been funding both sides of a civil war, while stealing petroleum resources there.  While Turkey and Qatar are funding and supporting the forces of Prime Minister Sarraj, the UAE, Egypt, and Saudi Arabia are funding and supporting the opposing forces of Field Marshall Haftar. Recently, it was revealed that the UAE bought Israeli military weapons and sent them to Haftar. Beginning in 2011, these countries participated in the ‘regime change’ project which saw Colonel Qaddafi removed from power, and murdered.

The chaos that exists in Iraq today began with the US military intervention in Iraq, which included 2 wars.  The Arab Gulf countries, with their ally Israel, have funded and supported the Iraqi Kurdish separatists, who have been successful in dividing Iraq.  It was the Arab Gulf countries that nurtured and gave birth to the political ideology we know as Radical Islam. The various terrorist groups, such as ISIS, Jibhat al Nusra, Al Qaeda, and others are all the creation of the Arab Gulf countries.  The US invasion of Iraq in 2003 saw the stealing of petroleum resources, gold bullion from the Central Bank, and antiquities from the National Museum in Baghdad. This looting of Iraqi resources is continuing.  The Arab Gulf countries have funded and supported differing Muslim sects to ensure the various groups will continue to fight, thus keeping Iraq weak and divided.

Like a couple who are not invited to the party, Turkey and its ally Qatar, have been singled out of the Arab Gulf alliance.  Differing political ideologies have created the split: with Turkey and Qatar following the Muslim Brotherhood ideology, while the rest of the Gulf adhere to the Salafi and Wahabi strain of Radical Islam.

“The Arab Spring” was not a grass-roots movement but was a 3 party project designed in Washington and Brussels.  2011 saw ‘regime change’ plans put into action in Libya, Egypt, Tunisia, Syria, Yemen, and Iraq, which has also suffered from a US ‘regime-change’ project in 2003. The Arab Gulf: UAE, Saudi Arabia, and Qatar participated in “The Arab Spring” by funding the US-EU-NATO project, at the behest of the ‘western civilized nations’, who used the Arabs as their source of funds.  The Arabs were also used for propaganda purposes, such as Qatar’s “Al Jazeera”, and Saudi Arabia’s “Al Hadath” and “Al Arabia”.

The US is continuing to steal resources from Syria and Iraq, such as the oil and gas wells they have occupied illegally, in the contrivance of international law. The US has made numerous unprovoked military attacks on Syria, and has very severe economical sanctions on Syria which prevent the rebuilding of Syria, and have prevented Syria from buying even the most critical humanitarian items, including supplies to fight the COVID-19.

Turkey has bought stolen Syrian oil, firstly from ISIS, and later from the Syrian-Kurdish separatists.  Turkey then sells the oil to ‘Israel’ through a private Israeli businessman.  Turkey and ‘Israel’ work in tandem, and both have played a major role in the 9-year conflict in Syria. They share intelligence to coordinate attacks on Syria.  Turkey is currently occupying parts of Syria, and ‘Israel’ has been occupying the Golan Heights of Syria since 1967. Both Turkey and ‘Israel’ have plans to annex Syrian lands.  Turkey is occupying the Syrian region of Iskenderun since the end of WW1.