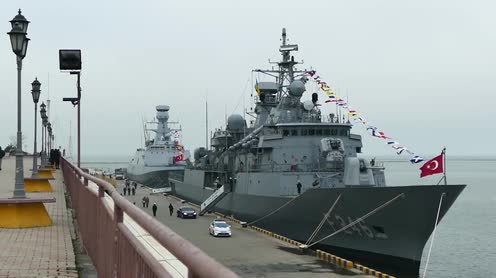 Greece announced Thursday evening that there are no scheduled talks between them and Turkey about the growing tensions between the two countries in the eastern Mediterranean.
Greece denied the announcement made by NATO about “technical talks” between Athens and Ankara to solve the ongoing crisis in the eastern Mediterranean.
The Greek denial came hours after NATO Secretary-General Jens Stoltenberg announced in a tweet that Greece and Turkey would hold talks at NATO headquarters with the aim of avoiding any unseen confrontations in the eastern Mediterranean, where countries differ on maritime borders and gas exploration rights.
Stoltenberg said that “after the talks I had with the leaders of Greece and Turkey, the two allies in NATO agreed to enter into technical talks at NATO headquarters to set up a mechanism in order to prevent any military conflict and reduce the possibility of accidents in the eastern Mediterranean.”
He added that “Turkey and Greece are valuable allies, and NATO is an important platform for consultations on all issues that affect our common security.”
The Greek Foreign Ministry said in a statement that “the information that was disclosed about the supposed technical negotiations in NATO does not correspond to reality.”
In its statement, the ministry pointed out that it had taken note of the “intention of the Secretary-General of NATO to work on establishing mechanisms to de-escalate the situation … but de-escalation will only take place with the immediate withdrawal of all Turkish ships from the Greek continental shelf.”
The level of tension is high over Turkey’s gas exploration activities in the region, which Greece and Cyprus consider a violation of their sovereignty, and the two sides have deployed warships in a show of force, which reinforced fears of a possible conflict by mistake.