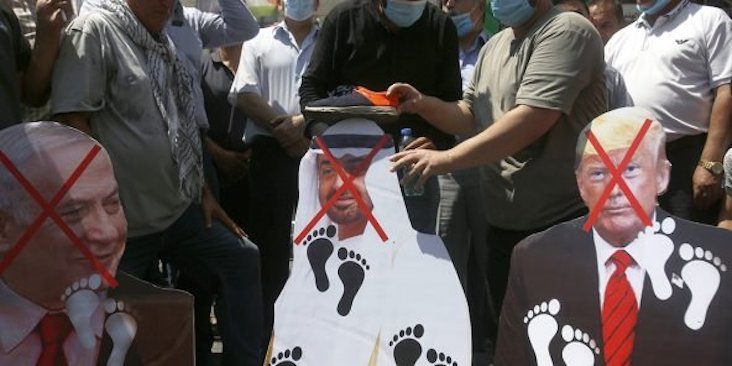 new survey has revealed that Arab populations continue to overwhelmingly oppose the recognition of Israel and the establishment of ties with it, despite recent decisions by rulers in the United Arab Emirates (UAE) and Bahrain to normalize with the Tel Aviv regime.

The 2019-2020 Arab Opinion Index was based on face-to-face interviews conducted with 28,000 individual respondents across 13 Arab countries, including Jordan, Palestine, Lebanon, Egypt and Mauritania, between November 2019 and September 2020.

The result showed that the nations viewed Israel as the primary threat their country was facing.

When asked whether they would “support or oppose diplomatic recognition of Israel by your country” only respondents in Sudan and Saudi Arabia came in at less than 80 percent for “oppose,” at 79 percent and 65 percent respectively.

Even in the two countries that already recognize Israel – Jordan and Egypt – opposition was very high, at 93 percent and 85 percent, respectively.

Neither Emirati and Bahraini nationals nor citizens from Oman, whose country is believed to be next in line to normalize with Israel, were included in the survey.

Many respondents were also fearful of the United States, with the Sudanese ranking the country as the gravest threat to their own, at 37 percent.

Meanwhile, Libya’s Tripoli-based Government of National Accord (GNA) has announced that it would not take over the current presidency of the Arab League.

The decision was made after the Palestinian Authority announced on September 22 that it had relinquished its right to hold the rotating presidency of the regional organization.

Palestine was protesting the League’s refusal to adopt a Palestinian-drafted resolution that would condemn the US-mediated normalization deals with Israel.

The Palestinian resolution was voted down during a session of Arab League foreign ministers on September 9. The organization blamed the failure to pass the document on the Palestinians, who said they would either accept a condemnation or no statement at all.

Palestinians, who seek an independent state in the occupied West Bank and Gaza, with East Jerusalem as its capital view the deals as betrayal of their cause.

Nomination of Kuwait, Qatar and then Libya for the current presidency of the Arab League was based on Article 6 of the internal regulations of the union, which states that the interim chairmanship of the organization will be taken up by the representative of the country that will be the next president in case the current president of the Arab League at the ministerial level fails to take over the position.

Fatah suspends all deals with Israel

“We have taken a decision to dissolve all agreements with the Occupation (Israel). We seek to reach a national Palestinian consensus with all factions and Hamas [resistance movement] in order to form a united political front,” Rajoub said in an interview with Lebanon-based Arabic-language al-Mayadeen television news network on Tuesday.

He noted that the Fatah movement has informed Hamas and other Palestinian factions of its plans since it considers the formation of a national coalition government highly necessary at the current stage.

Earlier in the day, Secretary General of the Palestinian Islamic Jihad resistance movement, Ziad al-Nakhala, called on the Palestine Liberation Organization (PLO) not to recognize Israel by any means and stop implementing the agreements signed with the regime.

“We will not oppose any national program that does not recognize the Zionist regime. We will always be with our people, resistance forces, fighters and defenders of our nation’s rights to freedom and liberation. We will vigorously participate in all popular activities. Our people will remain steadfast in their rejection of initiatives that forfeit their fundamental rights,” Nakhala pointed out.