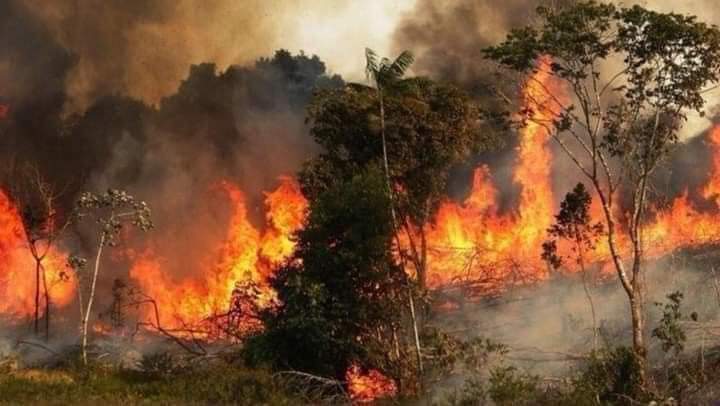 All it takes is a spark: Syrian wildfires turn olive trees into ashes

Latakia: Friday morning in the coastal city of Latakia, Syria seemed normal at first. Even though the October weather was still far hotter than normal, not many noticed the unusually strong winds wiping through the countryside, filled with olives, citrus, and various fruit and nut trees. The usual cooler, humid breezes blowing eastwards from the Mediterranean were replaced by a westerly wind blowing out to sea in a sudden reversal of normal weather patterns.

The olive trees were heavy and ready to be harvested. In a usual year, there would already have been at least one prior drenching rain, and that last rain before harvest adds moisture to each olive. However, this year was different, as global climate change took deadly hold in the eastern Mediterranean region.

Syrians face the ongoing COVID-19 pandemic, economic despair, lack of electricity, severe gasoline shortages, and now the loss of olive crops which not only bring income but are a traditional food source for farming families along the Syrian coast.

The Ministry of Agriculture had previously expected to produce 850,000 tons of olives this season from more than 87 million trees, said Engineer Muhammad Habu in August. Possibly more than 9,000 hectares of forests and agricultural lands burned between Friday and Saturday, while three people had died due to the fires, and 70 were treated at local hospitals with breathing difficulties.

Areas in the provinces of Latakia, Tartous, and Homs were affected, with an estimated 140,000 persons impacted.

President Bashar Assad, accompanied by various local officials, as well as those from the Ministry of Agriculture, visited areas in Latakia province which were affected in the fires.  Plans are afloat to assist farmers in replanting lost trees.

The mountain village of Qardaha was heavily hit by the fires, while the state-owned tobacco warehouse there became engulfed in flames, and the local hospital was threatened by the fires.

Syrian Agriculture Minister Mohammed Hassan Qatana said “a total of 156 fires” had broken out, most of them in Latakia and Tartus, in an unprecedented disaster, which was echoed by the Latakia fire brigade.

Bassem Douba, director of the forestry department in Latakia’s agricultural department, said villagers were forced to evacuate their homes and had sought shelter in Latakia and Tartus.

Latakia Governor Ibrahim Khader al-Salem said that “civil defense teams, supported by army units and the population, are now in control of all the fires in the province”.

Forest fires in the Hama region last month involved dozens of wildfires in the agricultural areas of Hama and Jisr Al Shughour, as well as near the coastal regions of Latakia, which consumed several square kilometers of forests. A severe heatwave caused nearly 60 bushfires.

To the south in Lebanon, there have been more than 100 fires across the country since Thursday, according to George Abu Musa, head of operations for the country’s civil defense.

Dozens of fires hit Lebanon in mid-October 2019, amid unusually high temperatures and strong winds, which were the same conditions in Syria on Friday.

The Lebanese government faced heavy criticism over its response to the 2019 blazes, which contributed to the mass protests of the population against the ruling class. The fires last October burned through the countryside near the Chouf mountains for days, during a heatwave that saw the highest recorded temperatures for that month, while hospitalizing and displacing dozens of people.

While Syria and Lebanon were burning on Friday, the authorities in the occupied West Bank, areas in central occupied Palestine, as well as along the north reported several fires as well, forcing thousands to evacuate.

Stephane Dujarric, the spokesman for UN Secretary-General Antonio Guterres, said Monday has coordinated with authorities in Syria to develop a contingency response plan to those areas affected by the wildfires.

Niklas Hagelberg, a climate change expert with the United Nations Environment Programme (UNEP), says a fast-warming planet will likely lead to more wildfires.  He said in an interview that climate change is present now, and the planet is already 1.1°C warmer than it was in pre-industrial times and that is changing the world around us.

When asked about the wildfires raging in California and Oregon this fall, Hagelberg said forest fires are natural, but the rise in the average temperature has increased the frequency and intensity of fires.

California and Syria in simultaneous wildfires

LeRoy Westerling, professor of management of complex systems at the University of California, said “It’s not as simple as saying the fire season is longer. It’s also much more severe.”

“The weather systems slow down and linger longer; there are longer dry spells and longer wet spells,” said Westerling.

Besides climate change, high winds can knock down power lines or blow-dry grasses into them which causes them to ignite, and the gusting winds and dry heat spreads the fires rapidly. This is true in both Syria as well as California where more than 12,000 firefighters continue to work on 14 major fires or complexes of fires around California, which have resulted in 31 fire-related deaths and more than 9,200 structures have been destroyed.