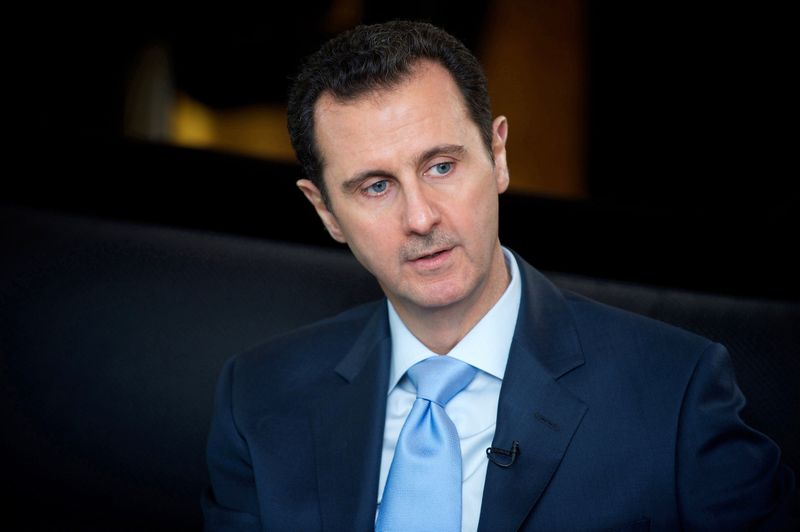 New allegations have surfaced, accusing Syrian President Assad of some connection to the Beirut Port blast.  Allegations don’t need proof, and they are a tool used repeatedly by the US against nations and leaders who they deem as an enemy.

Lebanese officials had for years known the dangerous chemicals were improperly stored at the port.  No one took any action to ensure the safety and security of the residents of the area.  It was hinted that Hezbollah must be to blame, but it was later proven that Hezbollah had no control over the Port and its contents.

Faysal Itani, a political analyst and deputy director of the Center for Global Policy at Georgetown University wrote that the Port, like other aspects of Lebanese society, suffered from a “pervasive culture of negligence, petty corruption and blame-shifting.”

Now, they must find a scapegoat. Almost three months ago, Walid Jumblatt began unsubstantiated accusations against President Assad, accusing him of having a hand in the Beirut Port blast. Recently, a Lebanese filmmaker aired a segment on a Beirut TV channel, Al Jadeed, in which he makes some connections to Syrian-Russian businessmen. These men vigorously deny any connection to the blast.

Lebanon may become a failed state in terms of the government, banking, economy, electricity, medical care, and security.  President Macron of France has tried to help, but the Lebanese officials refuse to comply with common-sense measures.

The Beirut Port blast highlighted in deadly terms the depths of the failure of the administration. Now, a filmmaker and a corrupt politician are trying to blame President Assad. This would not be the first time the Assad government has been blamed without proof.

Rumors and unsubstantiated accusations were hurled at President Assad and his government after the death of Rafik Hariri’s death.

Rafik Hariri, a dual Lebanese-Saudi citizen, was a billionaire businessman who served as prime minister of Lebanon five times, with his last term in office in 2004, after which he aligned himself with the opposition in parliament and was a symbol of Saudi influence after the end of the Lebanese civil war.

On February 14, 2005, Hariri got into his car and after his motorcade passed along the seafront corniche, a truck bomb tore through his vehicle, leaving a massive crater and ripping the facades of the surrounding buildings.

In August 2005, four Lebanese generals were arrested at the request of the UN investigator but were released nearly four years later without charge.

Hariri’s son, Saad, led a coalition of anti-Syrian parties known as March 14, which was backed by the US and Saudi Arabia.

Saad Hariri, who had blamed Syria for his father’s death, retracted his accusation against Damascus in 2010.

On August 18, 2020, an UN-backed court found a member of the militant group Hezbollah guilty of involvement in the assassination of Hariri. Judges at the Netherlands-based Special Tribunal for Lebanon said Salim Ayyash had a central role in the bomb attack in Beirut in 2005 that killed Hariri.

They acquitted three other defendants, who like Ayyash were tried in absentia. The prosecution’s case relied on the analysis of calls between mobile phones that it said were used to plan, prepare, and execute the attack. One of the judges, David Re, said the court had found motive but not evidence.

Hezbollah denied any involvement, and the judges said no evidence implicated the Shia militant group’s leaders.

Saad Hariri told reporters outside the court: “I think today everybody’s expectation was much higher than what came out, but I believe the tribunal came out with a verdict that is satisfying and we accept it.”

President Obama, the architect of the US-NATO attack on Syria for ‘regime change’ made a famous speech in which he said the use of chemical weapons in Syria would be a ‘red line’.  In mid-March 2013 the ‘rebels’ in Syria attacked Khan al-Assal, a small town near Aleppo, and killed about 30 people, and injured others. The Syrian government began requesting the UN to send investigators, but the UN did not quickly respond. The UN was standing politically with the US, UK, France, and trying to pin the blame on Syria.

Carla Del-Ponte, a former Swiss attorney-general, and prosecutor with the International Criminal Tribunal said in May 2013, “strong, concrete suspicions but not yet incontrovertible proof” suggesting the ‘rebels’ have used the nerve agent, sarin.

On August 18, 2013, a UN team of investigators arrived in Damascus, with Chemical weapons expert Ake Sellstrom in the lead. Before they could visit Khan al-Assal, the ‘rebels’ attacked East Ghouta, a suburb of Damascus on August 21, and uploaded videos that went viral on news media.  Claims of thousands dead from a sarin attack were made but without proof.

Ake Sellstrom said on August 24, 2013, “The weapons looked quite professional. But who has been using them, none of that we could conclude.”

Investigative journalist, Seymour M. Hersh, published “The Red Line and the Rat Line” which exposed the reason Obama decided not to attack Syria in September 2013 was the sample of the sarin used in East Ghouta was proven to not have come from a Syrian government source.

President Assad accused rebel groups supported by the US, Turkey, and Saudi Arabia of using chemical weapons to blame Syria because they were losing. The Syrian Arab Army has troops, weapons, and aircraft.  It has no motive to use chemical weapons when in a winning position.  It especially defies logic to ask for the UN inspectors to arrive to investigate chemical use by ‘rebels’, only to then use them just as the inspectors are unpacking their bags.

The repeated use of unsubstantiated accusations against President Assad and his government is not new, but an ongoing western led media war against Syria. This new accusation about the Beirut Port blast is a new chapter in a very old story.