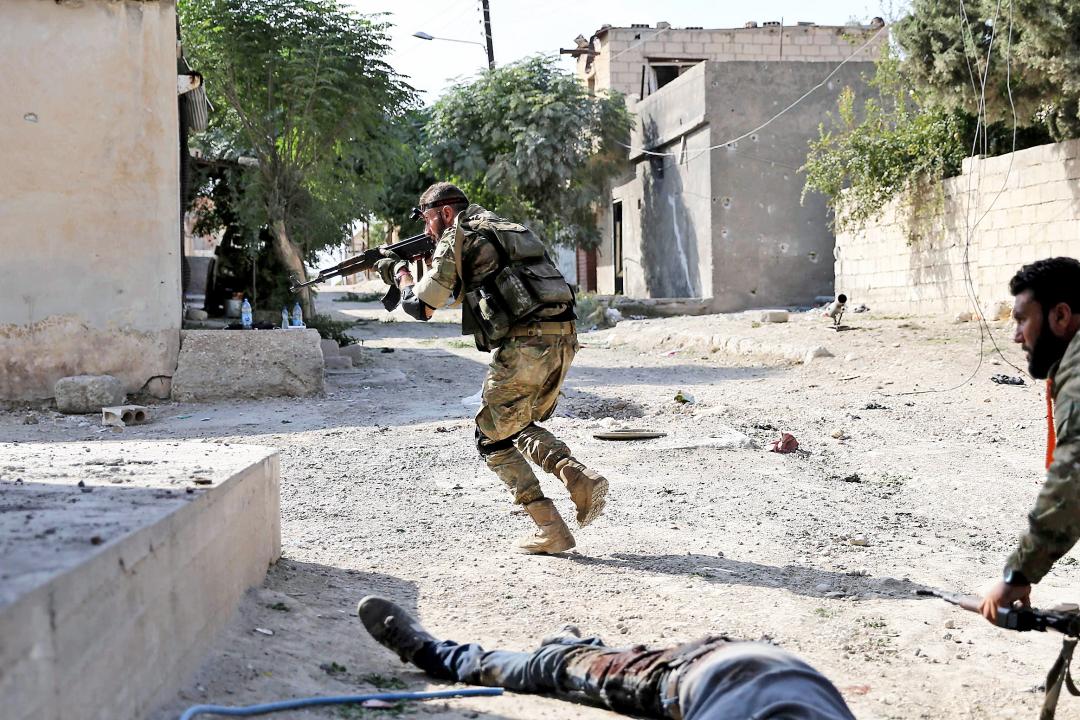 North East Syria is the scene of a stand-off between the Syrian Arab Army (SAA), based in Damascus, and the Syrian Defense Forces (SDF), who are militarily led by the People’s Protection Units (YPG), a Kurdish militia founded in October 2015, and supported by the US.

The North East corner of Syria has become like a patchwork-quilt, with patches of soil controlled by opposing sides, and various international players in the proxy war in Syria.  The Syrian conflict is approaching 10 years, and was a US-NATO attack on Syria for ‘regime change’. Their plan failed, but succeeded in destroying the country and infrastructure, and scattering millions around the world as refugees and economic migrants.

Some in the west have rooted for the Kurds to establish a ‘homeland’ in North East Syria, but they fail to acknowledge that the region is not inhabited by only Kurds.  While the Syrian Kurds represent some 10% of the population, they are a sizeable minority; but in a democracy the majority rules.

The Russian military recently sent reinforcements to the Qamishli airport in an effort to stabilize the tense situation in the area. The Russian military was invited to Syria by the Damascus government in 2015, and since then the government has regained control over the majority of the Syrian territory, with the exception of Idlib, which is under occupation by an Al Qaeda affiliate, HTS, and the North East region which is a conflict zone including the US, Russia, Turkey, the Kurdish militia YPG and the SAA. The Russians have continued negotiating with the Kurds for a peaceful resolution.

The Turkish Army invaded Syria in 2020 and recently shut down the Alouk water station, which supplies the city of Hasaka. After a one-week siege on the city residents, the Turks reopened the water on January 23.

The Internal Security Forces, a division of the YPG, sent reinforcements to the battle zone at Qamishli, in the neighborhood of Halko, where pitched battles erupted between the YPG and the SAA on January 23.

Previously, the YPG had prevented Syrian civil servants of the Hasaka water department in Al Azizia neighborhood from going to their office, and had kidnapped three of its staff.

The YPG had prevented doctors and staff from entering the Al-Qamishli National Hospital, a Syrian government hospital, for several days.

Yesterday, large reinforcements were set to the area by both sides. The YPG are surrounding Qamishli neighborhoods and the airport. The area is populated by Syrians, who are not ethnically Kurds, is controlled by Damascus, and the YPG cut off bread supplies and water to them.

The Kurds have been blamed for starving non-Kurds, such as the indigenous Syrian Christian population, which is a sizeable group referred to as Syriani.

Wheat, other grains, and crude oil have been smuggled to Turkey from Syria by the SDF/YPG and sold on the black market in Turkey, which is controlled by Turkish President Erdogan’s son and his relatives.

Rojava, which translates to ‘west’ in Kurdish, is the name given to the North East region of Syria, by the Communist revolutionaries of the SDF.

Residents recently fled from areas near Hasaka for fear of expected clashes after reports surfaced the SDF were storming the security zone in Hasaka city, which spurred people to flee from the market.

Some families living near the frontlines between the cities of Hasaka and Qamishli, started to leave their homes for fear of expected clashes between the SAA and the YPG, and the ongoing siege imposed by YPG.

The YPG has continued to prevent food and goods from entering the security zone in Hasaka city and has extorted money from violators.

Dozens of civil servants of the Syrian government staged a demonstration outside the justice building in the city of Hasaka, in protest against the continued siege imposed by YPG for the fifth day in a row on the neighborhoods controlled by Damascus, which prevent the entry of goods and food.

The current tensions may be tied back to January 10, when the YPG and the SAA stationed at the airport of Qamishli city, after the YPG kidnapped three senior SAA officers and some soldiers. Residents in the city were informed to stay away security checkpoints and windows, and the market of Qamishli city was closed due to the escalating security tensions and clashes which left four SAA soldiers injured, while YPG snipers were stationed on roof-tops.

Qamishli is mostly under the control of the SDF, and the YPG, that has been a major US partner. The Syrian government forces; however, have a significant military presence on the southern outskirts of the city and control its international airport.

“A few weeks ago, the YPG arrested a major Syrian government intelligence official and his son while they were coming to Qamishli from the city of Hasaka,” said Ivan Hasib, a reporter based in Qamishli.

“(Syrian) Government troops at the time responded by arresting several YPG officers,” he told Voice of America, adding that, “the Russians swiftly mediated between the two sides and for a while an informal truce was largely holding.”

A US military convoy of 40 trucks and armor vehicles entered Syria from Iraq on December 17, in Hasaka province, near the border with Turkey, and was followed up with some 200 US troops who arrived on helicopters. The troops deployed to the nearby oilfields. Trump had ordered the US military to guard the oil fields, while allowing the plundered oil revenues to support the SDF and YPG.

The Syrian Democratic Council (SDC) is the political-wing of the SDF and YPG. Their media outlets have detailed kidnappings, murder, abuse and arbitrary arrests in the region by the mercenaries under the control of the Turkish occupation forces.

These mercenaries are called the Syrian National Army (SNA) and they are terrorists following Radical Islam, which is a political ideology. Erdogan of Turkey leads a Muslim Brotherhood party, the AKP. The SNA were brought into Syria by the Turkish military invasion, which was green-lighted by Trump. The terrorists are responsible for massacres, abuse of human rights and overall oppression in the region, and consist of groups like the Sultan Murad division, the Hamza division, Jaysh-al Islam, Ahrar al-Sham and are often described as ‘moderate rebels’ in the US media, which tries to clean the image of these terrorists to sell regime change.

The patchwork quilt of North East Syria is fraying on the edges, and coming unstitched altogether. Opposing sides, and opposing international players are holding the Syrian people hostage. Now more than ever, the peace talks need to result in some changes on the ground.