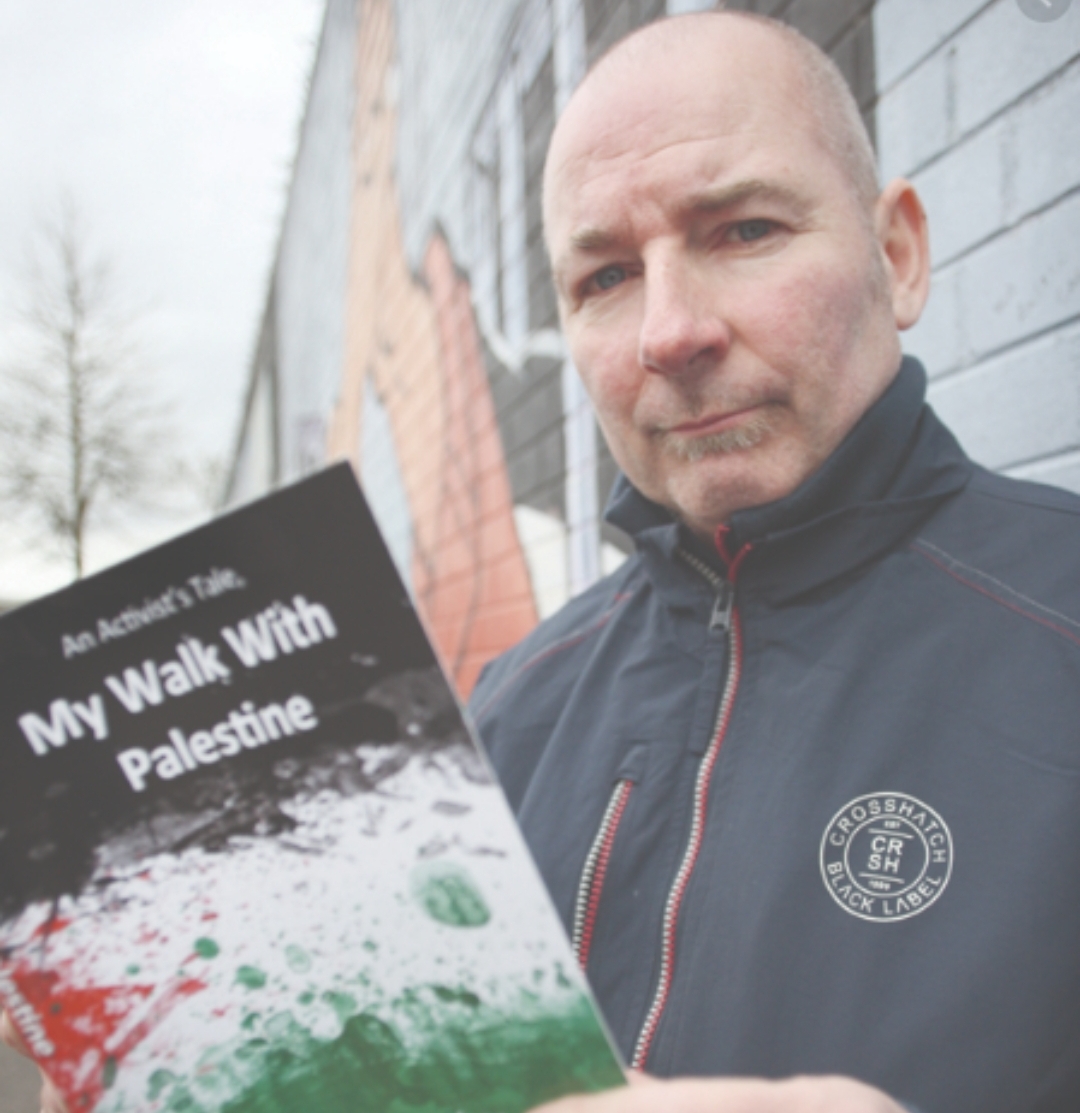 Syria is about to blow wide-open. Several days ago, Turkey bombed a residential area in Aleppo, followed by an Israeli bombing of the south of Aleppo, and the Turkish backed terrorists in Idlib bombed residential areas in the Latakia Province.  Many experts feel the area is on the doors of full scale military action in Idlib, to free the civilian population from the occupation of Hayat Tahrir al-Sham, the former Al Qaeda affiliate in Syria, and now backed by Turkey.  The Russian-Turkish deal to open the M4 highway from Latakia to Aleppo has never been implemented by the Turkish, and the Russians are fed up with terrorists taking shots at Russian patrols, and passenger buses and trucks.

Steven Sahiounie of MidEastDiscourse has interviewed Fra Hughes in an effort to get the back-story to this unfolding drama in Northern Syria.

Fra Hughes was born and lives in Belfast, Ireland. He is an activist, author, and journalist. He has written ‘My Walk with Palestine’ and ‘Voices from Donbass’. He has visited, Gaza, the Occupied West Bank, Israel, Lebanon, Syria, Egypt, Jordan, Venezuela, and the Donbass Republics of Lugansk and Donetsk. He is anti-imperialist by his politics.

1. Steven Sahiounie (SS):  The Israeli occupation keeps launching airstrikes on Syria. In your opinion, what is their goal from all these airstrikes?

Fra Hughes (FH):  Israel and Zionism are a cancer in the Middle East and West Asia. Like all cancers, if they are left untreated they will eventually kill the host. The host is Palestine and Israel’s continued illegal annexation of the West Bank, Jerusalem, and historic Palestine is the very reason Syria is under attack from both Israel and the West.

The premeditated war launched on Syria in 2011 at the behest of the west and led by Saudi Arabia and now Turkey was fundamentally to destroy a strong Arab bulwark against the expansionist designs of Israel within the region.

The dream of destroying Syria has failed. Thanks to Russia, Hezbollah, and Iran the country has been stabilized. The fight to liberate Syrian territory continues.

While Syria has been effectively balkanized between America, Isis, the Kurds, and Turkey it is no longer capable of challenging Israel’s perceived military supremacy in the region.

The attacks by Israel are designed to limit Syria’s response to the ongoing terrorist threats within its borders.

The aim is to disrupt supply lines. To terrorize the population of Damascus where most of the aerial bombings occur. To continue to support terrorist elements within Syria.

To keep the Syrian Arab Republic and its elected Leader Dr. Bashar Al Assad under military pressure. To put pressure on the Iranian presence in Syria and to continually provoke Damascus into a military response so Israel can then use its American arsenal of weapons to destabilize and further destroy the infrastructure and command and control capabilities of the Syrian Arab Republic. To further demoralize the Syrian people and create Gaza-style imprisonment and bombardment of the Syrian people. Damascus cannot fight ISIS, the Turks, Saudi Arabian money, America, and Israel all at the same time.

2.  SS:   American President Joe Biden promised to pull the American troops out of the Middle East in his election campaign, but until now he has not pulled out of Syria and Iraq, and he is still stealing the Syrian oil. What is his goal by not leaving Syria and Iraq?

FH:  Obama was partly elected on the promise of closing down Guantanamo Bay. A promise never realized. All politicians make promises in opposition that they never intend to implement.

Biden was Vice President to Obama. He simply used America’s unpopular wars in Iraq and Syria as a populist vote-winning slogan to get himself elected to the office of President of the United States. I have no doubt that even while pursuing this election tactic he was already planning on staying in the region.

Political pundits and analysts continually refer to America’s military adventures around the world and the cost of these aggressions as if they are reasons for America not to go to war?  History has proven conclusively that wars are fought for profit, not ideology.

There is a price to go to war and a profit to be made.

Lincoln famously said ‘I have two great enemies, the Southern Army in front of me and the bankers in the rear. Of the two, the one at my rear is my greatest foe’.

The taxpayers of Britain and America paid to destroy Iraq and Afghanistan. The industrial-military complex made billions of dollars of profit for its shareholders.

The taxpayers of Iraq and Afghanistan are paying to have the country rebuilt. Construction companies, oil companies, consultancy companies, private security firms, and a myriad of other contractors alongside international monetary loans and the cost of the continuing occupation all make profits for those who instigated financed, and conducted these wars.

America is stealing Syrian resources that belong to the Syrian people and their custodians in the Syrian government.

Monies that should go to social, education, and health projects for the Syrian nation are being stolen for profit. This is old-style imperialism where the aggressor steals from those they have militarily occupied. America steals the oil and the wheat from Syria in a two-pronged attack. The oil money goes to America and they deprive the Syrian economy and the Syrian government of much-needed revenue. The wheat is exported for profit also going to America and deprives the Syrian economy of much-needed revenue and the people are denied a basic food staple thus putting further punitive pressure on inflationary pressures that in turn impact the ability of the government and the people to have food security.

By staying in the region America is continuing to defend Zionist interests and destabilize Israel’s self-declared enemies and steal the national resources of occupied countries while championing the capitalist corporate interests of American companies.

3. SS:    The tension in northwest Syria between the Turkish occupation and the radical Islamic terrorists from one side, and the Syrian and Russian army on the other side, is on the highest level. In your opinion, will Syria and Russia start the military operation to liberate Idlib from the Turkish and their terrorists?

FH:  The Syrian Arab Republic and its elected President Dr. Bashar Al Assad have publicly stated their intention to reclaim all Syrian territory currently under the control of foreign and domestic terrorists.

If the Syrian Arab Army does not retake Idlib and all other occupied lands, Syria will in effect be balkanized. That would suit America, the west and Israel. Syria needs the political and military assistance of Russia to do this.

Erdogan will not leave voluntarily nor will the terrorist forces he arms supplies and helps finance. Erdogan is another regional leader hell-bent on expansionism.

After the failed American-inspired coup to remove him, Erdogan turned towards Russia, and if Putin tells him Russian forces will help liberate Idlib and other areas I do not think Erdogan will go to war with Russian forces

Putin is in Syria to prevent ISIS-affiliated Jihadists from being directed towards its border as Russia would be next in line for the American financed mercenaries to attack.

The Syrian leadership has been very adept at allowing mercenaries, many of whom are just there for the large monthly pay packet to leave disputed areas alive.

This offer will again be forwarded to those who want to survive a sustained campaign of military assault from the Syrian Arab Army.

I do hope they leave all contested areas peacefully to prevent a huge loss of civilian life and a further humanitarian crisis.

4. SS:    The Syrian people have been suffering for 10 years from the US and EU sanctions. Do you think that the United States will lift the sanctions off of Syria?

FH:  There is no chance of America lifting the sanctions. The only hope for the Syrian people is for other countries like Iran, Russia, and China to bypass the sanctions and an axis of resistance global alternative to American hegemony be established. Using the Yuan as the world’s reserve currency and the petro-yuan is a start. All countries under sanctions from Cuba to Venezuela must form a global alliance and trade with each other to protect all those economies.

We must stand together against American aggression military and financial.

FH:  I understand the economic pressures a sudden influx of returning refugees can have on Syria.

The Syrian people did not flee the Syrian government. They fled the violence and war foisted upon Syria by America, Britain, Israel, Saudi Arabia Turkey, and the west.

While America steals Syrian oil and wheat, and Turkey has stolen whole engineering plants and sophisticated modern machinery and technology, the response to the refugees by the Syrian government is, come home, we welcome you back, let us rebuild our country together. That is leadership. That is courage. That is love.

The refugees are being used as political leverage against Damascus, but together the people and its elected leaders can build a better brighter future.