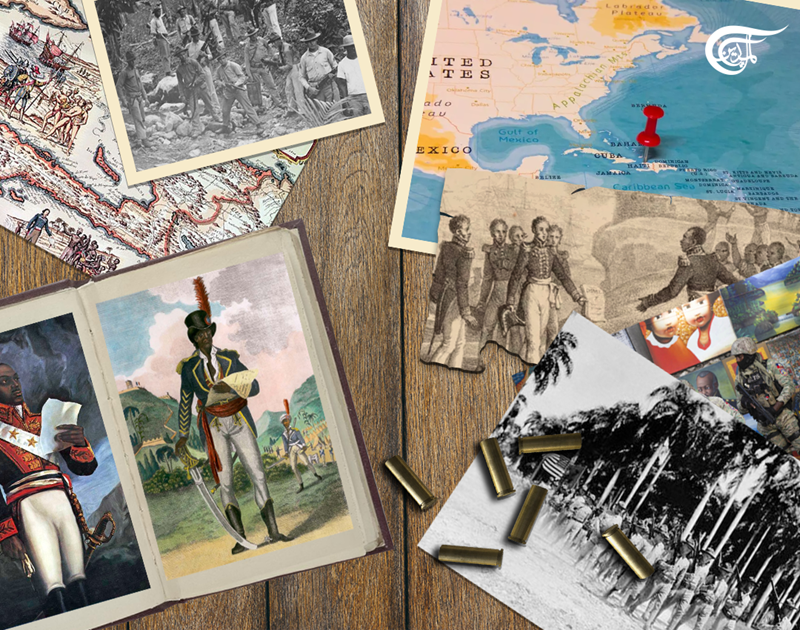 These lyrics, inspired by a singer’s childhood growing up in Haiti, showcase the many clashes of chaos and love which sit in the heart of the Caribbean nation.

But in order to fully comprehend the paradoxical nature of the country, one must perform a deep dive into its rich history, and that of foreign meddling in its affairs.

In his infamous expedition of 1492, Christopher Columbus first reached the Caribbean island of Hispaniola, dubbing its north coast La Navidad and claiming it as a Spanish property despite the outcry of its native population.

In 1697, The Ryswick treaty was signed between Spain and France, leading to the division of Hispaniola between the two colonial powers. The two islands were respectively named Santo Domingo and St. Domingue. The French forcibly brought Africans from their home countries to use them as slaves, making the land mostly populated by people of African descent or mulattos. For over a century, it was France’s most vital overseas colony, supplying it with sugar, coffee, rum, and cotton.

Despite the colonial ambitions of the settlers, Haiti achieved the seemingly impossible back then: General Jean-Jacques Dessalines, along with others, led the first national slave revolt against the French colonizers, ousting them and turning Haiti into the first independent South-American nation. Dessalines eventually became Haiti’s first head of state, a revolutionary figure loved by many.

The Republic of Haiti was declared on the 1st of January of 1804, adopting French and Creole as official languages, with its name meaning “mountainous country.”

Yet, tragedy ensued, as Dessalines was assassinated in 1806 by political rivals, which turned the political scenery of the Caribbean island into a spiraling pandemonium.

Meanwhile, Haiti’s revolution did not go unnoticed in the rest of the western hemisphere, notably colonialist and slaveholding nations which dreaded slave mutinies inspired by the island’s. For this reason, most of the international community, headed back then by the US, France, and England, shunned Haiti and attempted to completely isolate it in the hope of keeping its influence dormant.

In 1838, France finally recognized Haitian independence. However, this came at a hefty cost as the colonial power tied its recognition with an indemnity of 150 million francs. The nascent nation, cornered on a diplomatic level, decided to pay the sum by taking loans up to 70 million francs. This step profoundly constrained Haiti’s economy and laid foundations for nigh-endless socio-economic turbulences.

The US in Haiti

US interest in Haiti was prevalent for decades ahead of the 20th century: Viewed as a potentially powerful naval base, Andrew Johnson suggested in 1868 the annexation of the Hispaniola to secure a US defensive as well as an economic stake in West Indies. This suggestion came at a time when the US was annexing thousands of Pacific Islands, including Hawaii and the Philippines.

Over the course of the 20th century, Haiti faced a series of tumultuous political and military catastrophes which came as a result of US meddling. Other colonial powers’ influence waned amid the involvement in the First World War.

The first onsite meddling came in December 1914: The US marines illegally landed on the shore of Port-au-Prince, Haiti’s capital, and charged into the central bank of Haiti where they stole half of the Caribbean nation’s gold reserve before storing it in a vault on Wall Street. This abrasive attack on the country’s sovereignty came under the pretext of securing the US Citibank’s money, loaned to Haiti amidst its debt payment lags to its previous colonial overlords.

The theft resulted in popular anger against the incumbent president, leading him to resign. Another president, Jean Vilbrun Guillaume Sam, was quickly elected but subsequently assassinated due to his rapprochement policy with the US.

After the invitation of antinationalist bourgeois elites of the country, the assassination was used as an excuse by the Wilson administration to invade Haiti in 1915 and occupy it for nearly 20 years. Over the course of its occupation, the US replaced the Haitian army with its own militarized police called ‘The Gendarmerie,’ forced the election of a puppet president, assassinated revolutionary dissidents, controlled the legislations of the country, and drained its economy. Racial segregation, violence, and forced labor became a staple of the US-controlled gendarmerie back at the time.

In 1934, the US marines left Haiti whilst maintaining fiscal control until 1947. The Marines’ departure left behind a trail of armed forces, gangs, and mercenaries throughout the country.

In 1957, Francois Duvalier, also known as “Papa Doc,” came into power through a military-controlled election. He declares himself “President for life” in 1964, launching a macabre chapter of Haiti’s history where tens of thousands were killed, tortured, or exiled. His rule coincided with the lowest ebb of US interference, given that his policies were extremely pro-western, anti-nationalist, deemed as a “necessary ally against communism.”

His reign ended in 1971 after his death. The same year, Duvalier’s son Jean-Claude -or “Baby Doc”- was appointed as head of state by his father at the young age of 19. Baby Doc’s iron-fist rule is not contested by the international community but is in fact widely approved of, notably by the Reagan administration. He follows in his father’s footsteps, leading to the crushing of protesters, countless political arrests and assassinations, the killing of schoolchildren, and the dilapidation of the country’s resources.

In 1986, Haiti imploded in the face of the Duvalier dictatorship; after looting $600 million from the national reserve, Baby Doc was flown out to France by the US.

Despite the Duvalier dynasty’s rule coming to an end, the US never ceased supporting the remnants of the dictatorship in order to further its control and interests in the country.

In 1990, Father Jean-Bertrand Aristide, a leftist parish priest who vowed to improve the life of the poor, won the election at an astounding 67.5%. Meanwhile, the US-backed candidate Marc Bazin, a World Bank official, ends with 14.2%.

This electoral defeat prompted the US to foment a coup against Aristide and his progressive political party “Lavalas,” implemented by neo-Duvalierists on the CIA’s payroll and backed by their international allies. Over 1,000 citizens are killed in the first days of the coup, turning Haiti into a bloodbath. Aristide is exiled to South Africa.

The real reason behind the orchestration of this coup is the Lavalas’ opposition to the US’ strong desire to privatize the public sector and turn the island into an economic haven for foreign investment.

Economic sanctions were placed on Haiti in 1992, with US president George Bush exempting US factories from those measures.

After forcing Aristide to accept Washington’s economic dictations in 1994, Bill Clinton declares that all diplomatic initiatives were exhausted, paving the way for a US-led invasion formed of 20 countries. The coalition forces land in Haiti, forcing the coup regime to relinquish power and reinstating Aristide who brought back his government.

Yet in 2004, Aristide was toppled again by elements instigated by the George W. Bush administration. Soon enough, Washington yet again invaded Haiti with Canadian and French assistance. After the international coalition’s retreat, the UN took hold of the country, spreading thousands of Peacekeeping troops in the island until 2017.

The UN troops’ presence turned out to be a Haitian nightmare, as the soldiers became known for their violence, racism, and most dreadfully, their rape crimes.

The Odd Saga of the Banana Man

Fast-forward to 2016, when Jovenel Moïse, also known as the “Banana Man,” was elected president of Haiti amidst a low turnout of voters and multiple claims of voting fraud. Moïse, an unknown on the political scene, came into power after he was propped up by the previous president Michel Martelly, US-backed as well, who won the position through similar electoral tactics in 2011.

Both were pro-Duvalierists neoliberals, following the same economic policies as they vowed to “make Haiti business-friendly” and “follow the Columbian development plan,” which is synonymous with neoliberalism at gunpoint.

Moïse was Washington’s right-hand man in Haiti. Despite his fraudulent claims regarding the need to extend the period of his incumbency as well as the increase in corruption, violence, and oppression under his rule, both the Trump and Biden administrations turned a blind eye, offering help and support when requested to his administration.

In 2019, five mercenaries, composed of two ex-navy seals, a Blackwater-trained contractor, and two Serbian mercenaries residing in the US,  were caught in Port-au-Prince preparing to escort Moïse’s presidential aid to the central bank to transfer $80 million from a government oil fund to a second private account owned by Moïse.

This scandal was one of many which plagued the Banana Man’s presidency, which is why his death seems weirder and even more scandalous. Assassinated on the morning of the 7th of July in his own house, the culprits were quickly then identified: The hit squad was formed of 26 Columbian mercenaries and 2 American-Haitians, of which a few were arrested. The alleged mastermind behind this operation, Christian Emmanuel Sanon, is a Florida-based Haitian evangelical pastor. A fervent oppositionist to the Haitian political administration, the pastor claims the US state and justice department wanted to install him as head of state and requested that he carry out the assassination to facilitate this end goal.

The more the investigation keeps going, the more the US seems involved: Apart from Sanon’s allegations, many reports indicate that one of the detainees is a former US drug agency informant.

Immediately, claims for the presidency began to emerge from three different state officials. One of them, acting Prime Minister Claude Joseph, has already requested the support of US and UN troops. In response, Washington sent high-caliber FBI and Homeland Security officials to “assess” the situation. They came back with the following statement: “There is a lack of clarity about the future of political leadership.” Soon enough, the US Department of Justice became involved in the investigation, even though all fingers thus far point out to the US involvement.

Furthermore, the Biden administration has yet to give a definitive answer regarding its plans to send military troops, but it is clear that this decision is being meticulously studied and considered.

Rallying cries for another US invasion are getting louder, notably in influential newspapers such as The Washington Post, which described the rape-infested UN and US invasion era as a “modicum of stability.”

Loose ends, suspicious statements, and US interference are all elements contributing to further the murkiness of the narrative. Yet parallel to the 1915 invasion which was justified by a presidential assassination (which was itself caused by US international hooliganism), the US’ heavy involvement does not seem far away. All the elements are there, from political turmoil to economic instability followed by invitations of invasions by seemingly puppet leaders.

In conclusion, even if the US is not directly involved in the assassination of Jovenel Moïse, its imperialist approach is at the very least responsible for the series of crises that have led to the current wave of events.