‘Our lungs are burning’: Turkish mayor issues desperate plea for help as raging wildfires close in on power plant 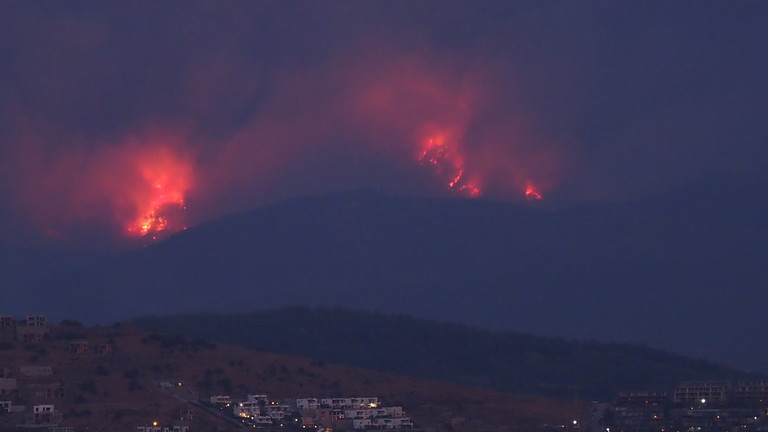 The mayor of a town in southwestern Turkey has desperately called for a firefighting helicopter or plane with night vision to be sent to the area, as disastrous wildfires close in on his town and its thermal power plant.

“The situation is very serious. The flames have come to the edge of the thermal power plant,” Muhammet Tokat, the mayor of Milas – located east of the major resort of Bodrum – said on Twitter on Tuesday.

Tokat shared a video showing a massive blaze raging through the hills near the city and sending plumes of black smoke into the night skies, a short distance from what appeared to be the Kemerkoy power station.

The mayor urgently called for a plane or helicopter with night vision to be sent to the area to stop the flames from approaching the plant. Earlier, Tokat shared another video showing brown smoke clouding the skies over the sea near his town, as a wall of fire descended from the nearby hills.

“We watch, with our lungs burning, we fear that our warnings and pleas were justified,” he said at the time, adding that “the fire and the power plant came face to face.”

Massive wildfires have been raging in the area for days. Videos and photos shared on social media showed huge walls of fire rising for many meters above the trees and painting the sky itself red. One photo showed Milas being surrounded by walls of fire burning in the nearby hills.

“This is a critical place,” Tokat said in one of the videos. “The fire has reached the residential complexes,” he warned, adding that “going beyond this hill will mean that the fire will reach a whole new dimension.” A village near Milas was evacuated as the flames engulfed the houses.

The town is preparing its last defenses. Turkish police said they would aid the firefighters by deploying the water cannons used to disperse the crowds at rallies to tackle the blaze. The country’s defense and interior ministers also said they were mobilizing their forces in various regions to help the firefighters.

At least 11 wildfires were still burning in southwestern Turkey, as temperatures remained above 40C and strong winds helped the blaze to spread even further. Plumes of black smoke were also rising near the coastal resorts of Bodrum and Marmaris.

Meanwhile, the EU sent help to Turkey under the Civil Protection Mechanism to help Ankara with “unprecedented forest fires” as the official death toll rose to eight people. The Turkish forestry directorate confirmed that a total of 105 fires have broken out in 35 towns and cities since last Wednesday.