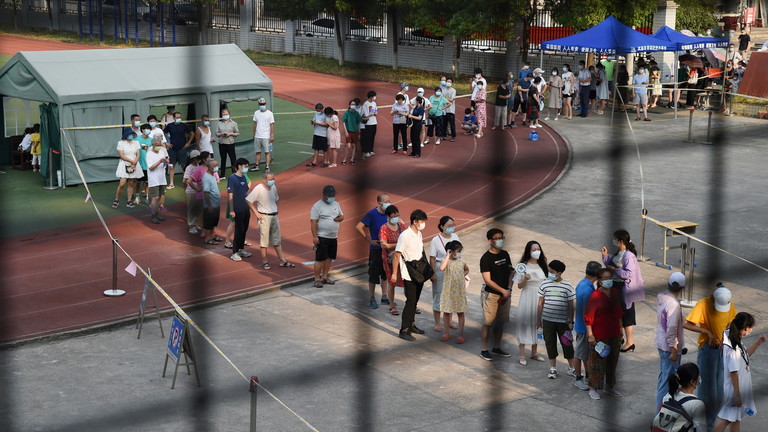 The city of Wuhan has tested virtually every resident, except for children under six and those on vacation, in a sweeping effort to prevent a new Covid-19 outbreak in the metropolis where the pandemic is believed to have started.

Mass testing in the capital of Hubei province was launched on Tuesday, after authorities discovered a handful of locally transmitted cases, marking the first time that Covid-19 infection has been registered in the city since June 2020.

With an army of 28,000 medical staff mobilized to test 11.28 million residents at over 2,800 sampling sites set up across the city, the sweeping campaign was “basically” finished by Saturday, deputy secretary-general of the Wuhan municipal government, Li Tao, announced on Sunday.

A total of 78 people tested positive for Covid-19 – including 41 locally transmitted asymptomatic cases, authorities said. Moreover, most of these infections were among those already quarantined after previous contacts with the infected. Only nine cases were discovered during the screening of residential blocks, and even those were reportedly isolated within their sealed-off residential communities, Xinhua reported.

The original infections in Wuhan, as well as the nearby cities of Jingzhou and Huanggang, have been traced to a recent outbreak in Huaian city in Jiangsu province, authorities previously said.

Overall across China, authorities reported only 125 new cases on August 8, with most clusters caused by the Delta variant of Covid-19. In total over the course of the pandemic, China – which does not classify asymptomatic carriers as ‘confirmed cases’ – officially acknowledged only 93,826 infections and 4,636 deaths.